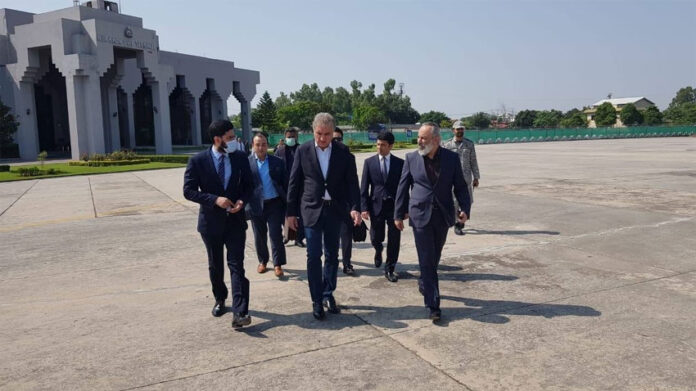 ISLAMABAD: Foreign Minister Shah Mahmood Qureshi has said that he would discuss with his Russian counterpart the construction of a gas pipeline due to be built by Russia and stretching 1,100 km from Lahore to Karachi.

The foreign minister said this on Wednesday before leaving for Moscow on a two-day visit to attend a meeting of Council of Foreign Ministers of Shanghai Cooperation Organisation (SCO). The invitation to the foreign minister to attend the SCO Council of Foreign Ministers was extended by his Russian counterpart Sergei Lavrov, who will also chair the meeting.

“North-South Gas Pipeline is a project that can greatly benefit Pakistan,” Qureshi said in a video message before leaving for Moscow. “I am hopeful that we will discuss it and there is a possibility of progress.”

He said that a meeting has been set up with the foreign minister of Russia, adding, “I believe that in the coming days there is a bright possibility that our ties with Russia will grow. I see the possibility of a long term, multidimensional partnership.”

FM Qureshi said that the 1,100-kilometre-long pipeline will be laid between Karachi and Lahore, and this project has been delayed since 2015. He said that the project will be discussed and some progress may also take place during the visit.

He also said that Pakistan would also hold discussions with the heads of Central Asian nations to see how “volume of trade” could be increased and the economic prosperity of the region promoted through Pakistan’s southwestern Gwadar port, which Pakistan plans, with China’s help, to turn into a transhipment hub and mega port to be built alongside special economic zones from which export-focused industries will ship goods worldwide.

Qureshi also said that the SCO meetings in Moscow would bring together countries with a “deep interest” in peace and stability in Afghanistan where talks between the Taliban and the Kabul government are about to start to find a solution to a 19-year-long civil war.

The foreign minister said that SCO is an important platform that provides numerous opportunities for progress, prosperity and regional connectivity.

It is pertinent to mention here that the US sanctions against Russian state conglomerate Rostec, as well as a dispute over North-South pipeline transport fees, have held up the $2 billion project since it was signed in 2015. The North-South pipeline would be the biggest infrastructure deal by Russia since the early 1970s when Soviet engineers constructed the Pakistan Steel Mills industrial complex.

The SCO Council of Foreign Ministers will go on from September 9-10.