The initiative allows Non-Resident Pakistanis to remotely open accounts through an entirely digital process without any need to visit a bank branch, embassy, or consulate 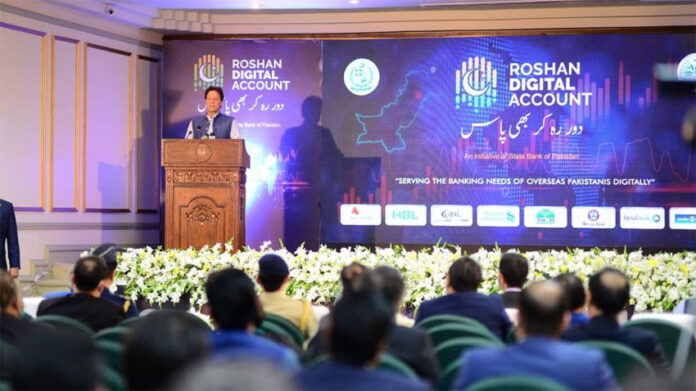 Roshan Digital Account (RDA) is a big step for Pakistani expatriates to participate in nation-building, said Prime Minister Imran Khan during the launching ceremony of RDA in Islamabad on Thursday.

“Our biggest asset is the overseas Pakistanis and we were unable to tap their potential previously,” said the premier. “Owing to the flawed policies of the past, we couldn’t make overseas Pakistanis part of nation-building process. Hence, the opening of this Roshan Digital Account is a big step for Pakistan.”

Listing the new projects announced by the government, such as the Ravi City waterfront project and the ML-1 railway project, the PM said contributions from overseas Pakistanis are required for successful execution of all projects.

He noted that nearly half of the government’s revenue is spent on payment of loans and that there is a need for the country to move towards wealth creation.

“We need to increase our economic activity to an extent where we are able to comfortably pay off these loans, and keeping this in mind, the government offer an incentive package to the construction sector, which supports 30 other sectors.”

He recalled that when the government came into power, there was a $40 billion trade deficit. “Our exports stood at $20bn, whereas our imports were roughly at around $60bn. And of course, we also inhereted a record-high current account deficit of $20bn —  after deducting remittances.”

He said with a reduction in dollars, the rupee falls, which leads to inflation and people stop investing.

“This results in a decline in wealth and investment […] this is why we need dollar investments from overseas Pakistanis. We have seen an increase in remittances but now wish for there to be greater investment in the country.”

He said the governments in the past had been unable to present any “viable” options to overseas Pakistanis, but the two aforementioned mega projects are an excellent opportunity for them to invest.

Speaking of the perception surrounding dual nationals in Pakistan, he questioned why they are considered “traitors”.

The PM said that those who look at overseas Pakistanis with “suspicion” should know that they are, perhaps, more patriotic than the people who are living in Pakistan.

“We must understand why these nine million people left in the first place. We were unable to provide them jobs. And a lot of them acquired qualifications from abroad. They are so qualified that we do not have suitable jobs for them here. And for the jobs that we do have here, we cannot afford to pay the remuneration they deserve.”

The prime minister said that until the export levels can be raised in the post-coronavirus economic environment, it is the expatriates who have to be encouraged to invest.

Predicting a “construction boom” in the country due to the government’s policies, the premier urged overseas Pakistanis to make use of this initiative and invest wholeheartedly in the country.

Meanwhile, in a press release issued earlier today, Prime Minister’s Office said that the initiative by the central bank will work with commercial banks operating in Pakistan.

“For the first time in the country’s history, Non-Resident Pakistanis (NRP) will be able to remotely open an account through an entirely digital and online process without any need to visit a bank branch, embassy, or consulate,” it said.

“The customer can choose either foreign currency or rupee dominated account, or both. Funds in these accounts will be fully repatriable, without the need for any regulatory approval,” the statement read.

LAHORE: Engro Fertilizers Daharki plant has been declared the global winner of the DuPont Safety Innovation Award 2020. The announcement was made by DuPont Sustainable...
Read more
- Advertisment -

January 24, 2021
DHAKA: Bangladesh will buy 100,000 tonnes of rice from Myanmar, putting aside a rift over the Rohingya refugee crisis as the government races to...