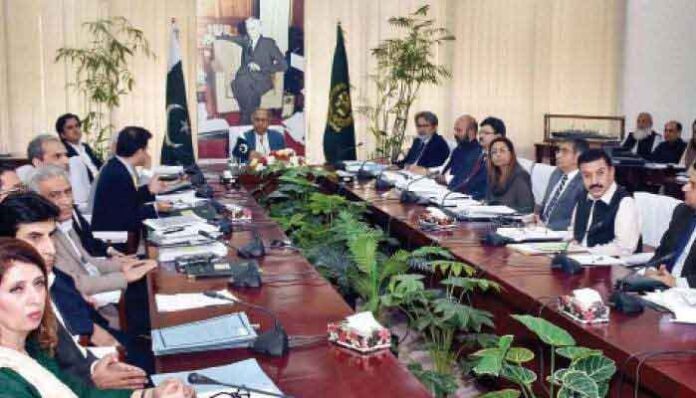 ISLAMABAD: The Executive Committee of the National Economic Council (ECNEC) on Thursday approved nine development projects worth billions of rupees.

The ECNEC meeting was chaired by Adviser to Prime Minister (PM) on Finance and Revenue Dr Abdul Hafeez Shaikh.

According to details, the 221km N-55 Additional Carriageway Project (Shikarpur-Rajanpur section) will be completed at a total rationalised cost of Rs44.7bn — to be shared by the Asian Development Bank (ADB).

The project envisages the construction of two additional lanes besides the widening of the existing two-lane carriageway. The federal government’s Public Sector Development Programme (PSDP) had allocated Rs1bn for the project in 2020-2021.

Similarly, the construction of Rajanpur-DG Khan Section as a four-lane highway of 9,121km would be completed at a total rationalised cost of Rs33.17bn with ADB putting in a share of Rs28.52bn.

The road that starts from Rajanpur passes through Fazilpur, Muhammadpur Dewan, Jampur and terminates at DG Khan. The federal PSDP has allocated Rs0.5bn for the completion of this project in 2020-2021.

The dualisation and rehabilitation of DG Khan-DI Khan section would be completed at a total rationalised cost of Rs52.27bn with ADB throwing in Rs44.95bn. The project road starts from DG Khan then passes through Shah Sadar Din, Kala, Shahdan Lund, Taunsa, Tibi Qasrani, Mahra, Paroa and terminates at DI Khan. The federal PSDP had allocated Rs0.5bn for the project in 2020-2021.

The rehabilitation and upgradation of the 80km Jhaljao- Bela Road would be done at a total rationalised cost of Rs11.11bn without any foreign exchange component. The road starts from Jhaljao, traverses through towns of Augani, Sipai sing, Chauki and finally terminates at Bela.

The project is of huge significance, as besides saving travel time and vehicle operating costs of commuters, it will also ensure the efficient movement of trade, goods and traffic in a relatively shorter time.

It may be mentioned here that all of the above projects are expected to be completed in a period of three years whereas their execution, operation and maintenance would be undertaken by the National Highway Authority (NHA).

The meeting approved the 32km Peshawar Northern Bypass Project at a revised cost of Rs21.33bn; the four-lane bypass would have service roads on either side. The total distance of the bypass road has been divided into three packages for construction purposes.

Meanwhile, the construction of the 157MW Madian Hydropower Project, under the WB assisted Khyber Pakhtunkhwa (KP) Hydropower and Renewable Energy Development Programme, was approved by ECNEC at a total rationalised cost of Rs79,374.85 m with Foreign Exchange Component (FEC) of Rs57,339.33 m.

On the other hand, the construction of 88 MW Gabral Kalam Hydropower Project was approved at an estimated cost of Rs36.43bn, including FEC of Rs8.81bn.

In the same manner, the ECNEC approved the Evacuation of Power Project from 2160 MW Dasu HPP stage I Dasu to Islamabad via Mansehra at a total cost of Rs132, 249.84 m with FEC of Rs112,228.74 m. The project is expected to completed in five years time and is proposed to be financed by the World Bank.

Furthermore, the meeting also approved the “Simplification of Planning Commission/ Planning Division Development Processes/ Procedure to improve Project Management” (Guidelines). According to the new procedures, reforms would be made in six areas including project identification and preparation of PC I, processing and approval of PC I, project management and staffing, the opening of a project assignment account, the procedure for release of funds, and monitoring and evaluation.