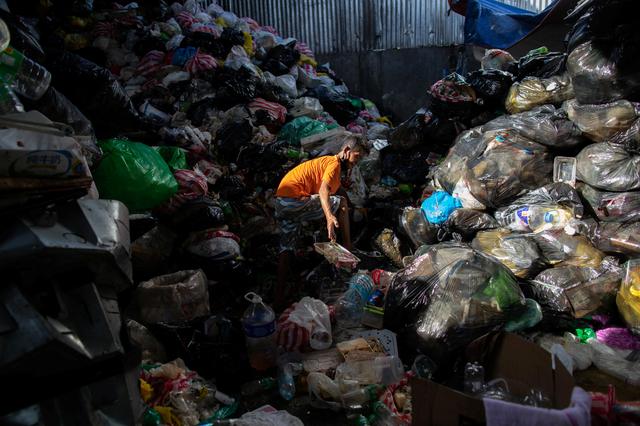 The coronavirus pandemic has sparked a rush for plastic.

From Wuhan to New York, demand for face shields, gloves, takeaway food containers and bubble wrap for online shopping has surged. Since most of that cannot be recycled, so has the waste.

But there is another consequence. The pandemic has intensified a price war between recycled and new plastic, made by the oil industry. It’s a war recyclers worldwide are losing, price data and interviews with more than two dozen businesses across five continents show.

“I really see a lot of people struggling,” Steve Wong, CEO of Hong-Kong based Fukutomi Recycling and chairman of the China Scrap Plastics Association told Reuters in an interview. “They don’t see a light at the end of the tunnel.”

The reason: Nearly every piece of plastic begins life as a fossil fuel. The economic slowdown has punctured demand for oil. In turn, that has cut the price of new plastic.

Already since 1950, the world has created 6.3 billion tonnes of plastic waste, 91% of which has never been recycled, according to a 2017 study published in the journal Science. Most is hard to recycle, and many recyclers have long depended on government support. New plastic, known to the industry as “virgin” material, can be half the price of the most common recycled plastic.

Since Covid-19, even drinks bottles made of recycled plastic – the most commonly recycled plastic item – have become less viable. The recycled plastic to make them is 83pc to 93pc more expensive than new bottle-grade plastic, according to market analysts at the Independent Commodity Intelligence Services (ICIS).

New plastic has long been cheaper to buy than recycled. Weak oil prices this year widened the gap.

The pandemic hit as politicians in many countries promised to wage war on waste from single-use plastics. China, which used to import more than half the world’s traded plastic waste, banned imports of most of it in 2018. The European Union plans to ban many single-use plastic items from 2021. The US Senate is considering a ban on single-use plastic and may introduce legal recycling targets.

Plastic, most of which does not decompose, is a significant driver of climate change.

The manufacture of four plastic bottles alone releases the equivalent greenhouse gas emissions of driving one mile in a car, according to the World Economic Forum, based on a study by the drinks industry. The United States burns six times more plastic than it recycles, according to research in April 2019 by Jan Dell, a chemical engineer and former vice chair of the U.S. Federal climate committee.

But the coronavirus has accentuated a trend to create more, not less, plastic trash.

The oil and gas industry plans to spend around $400 billion over the next five years on plants to make raw materials for virgin plastic, according to a study in September by Carbon Tracker, an energy think tank.

This is because, as a growing fleet of electric vehicles and improved engine efficiency reduce fuel demand, the industry hopes rising demand for new plastic can assure future growth in demand for oil and gas. It is counting on soaring use of plastic-based consumer goods by millions of new middle-class consumers in Asia and elsewhere.

Most companies say they share concerns about plastic waste and are supporting efforts to reduce it. However, their investments in these efforts are a fraction of those going into making new plastic, Reuters found.

Reuters surveyed 12 of the largest oil and chemicals firms globally – BASF, Chevron, Dow, Exxon, Formosa Plastics, INEOS, LG Chem, LyondellBasell, Mitsubishi Chemical, SABIC, Shell and Sinopec. Only a handful gave details of how much they are investing in waste reduction. Three declined to comment in detail or did not respond.

Most said they channel their efforts through a group called the Alliance to End Plastic Waste, which is also backed by consumer goods companies, and which has pledged $1.5 billion over the next five years on that effort. Its 47 members, most of whom are in the plastics industry, had combined annual revenue of almost $2.5 trillion last year, according to a Reuters tally of company results.

In total, commitments by the Alliance and the companies surveyed amounted to less than $2 billion over five years, or $400 million a year, the Reuters survey found. That’s a fraction of their sales.

Plans to invest so heavily in new plastic are “quite a concerning move,” said Lisa Beauvilain, Head of Sustainability at Impax Asset Management, a fund with $18.5 billion under management.

“Countries with often undeveloped waste management and recycling infrastructure will be ill-equipped to handle even larger volumes of plastic waste,” she said. “We are literally drowning in plastics.”

The oil industry’s investments in new plastics will dwarf those in cleaning it up.

Since the coronavirus struck, recyclers worldwide told Reuters, their businesses have shrunk, by more than 20pc in Europe, by 50pc in parts of Asia and as much as 60pc for some firms in the United States.

Greg Janson, whose St. Louis, Missouri, recycling company QRS has been in business for 46 years, says his position would have been unimaginable a decade ago: The United States has become one of the cheapest places to make virgin plastic, so more is coming onto the market.

“The pandemic exacerbated this tsunami,” he said.

The oil and chemicals companies that Reuters surveyed said plastic can be part of the solution to global challenges related to a growing population. Six said they were also developing new technologies to reuse waste plastic.

Some said other packaging products can cause more emissions than plastics; because plastic is light, it is indispensable for the world’s consumers and can help reduce emissions. A few called on governments to improve waste management infrastructure.

“Higher production capacities do not necessarily mean more plastic waste pollution,” said a spokesman at BASF SE of Germany, the world’s biggest chemicals producer, adding that it has been innovating for many years in packaging materials to reduce the resources required.

The new plastic wave is breaking on shores across the globe.