'Closure of entire building was unnecessary, as 80pc of the plaza -- basement and first floor -- remained safe from the fire' 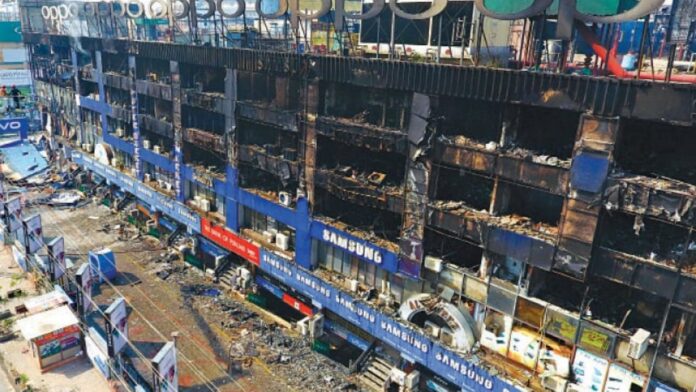 LAHORE: Trade organisations on Tuesday demanded the reopening of Hafeez Centre, a major business hub of the provincial capital that has been sealed by the district administration owing to the recent fire incident.

The plaza has now been closed for the past 10 days.

Khalid Shafiq, a trader at the plaza, informed that Hafeez Centre had a daily turnover of Rs150 to Rs200 million.

“We are extremely worried about the damage caused by the fire, as our businesses have come to a standstill. In these trying times, was closure of the market the only solution?” Shafiq asked, lamenting that instead of giving relief to traders, the administration close to close their businesses.

Hafiz Zaheer Madani, a shopkeeper who buys and sells mobile accessories and repairs mobile phones, said he had been unemployed for the last 10 days. “Although the plaza was inspected thoroughly by the government, they did not inform when the NOC would be issued for the resumption of businesses.”

Meanwhile, officials of Khidmat Group, an organisation of traders, demanded the immediate reopening of Hafeez Centre as traders could not rely on the “government’s speed” of sorting out issues.

They were of the view that the closure of the entire plaza was unnecessary since 80pc of the building – basement and first floor – remained safe during the fire. The plaza should be surveyed by experts and an NOC be issued at the earliest, they demanded.

On the other hand, the Punjab government has decided to take stern actions against those who do not install fire hydrants inside and outside high-rise buildings.

Sources in the Punjab Home Department informed that during the sixth meeting of the Punjab Emergency Council (PEC), it was decided that fire hydrants would have to be installed inside and outside newly constructed commercial buildings across the province, including Lahore.

It was further decided that the government would not approve any building plan that lacks the installation of fire hydrants.