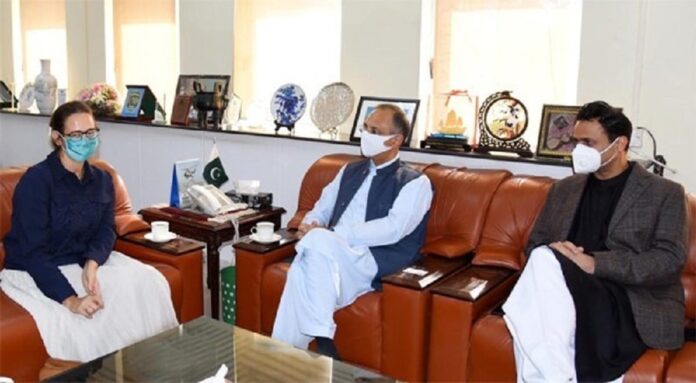 ISLAMABAD: Energy Minister Omar Ayub Khan has said that the government has planned to transform the outlook of the energy market under the new Alternative Renewable Energy Policy.

The minister said this while talking to Ambassador of Denmark to Pakistan Lis Rosenholm on Friday. Tabish Gauhar, Special Assistant to Prime Minister on Power, was also present on the occasion.

During the meeting, the outlook of the emerging market of the sector and business opportunities in view of the newly approved Alternative Energy Policy were discussed.

Acknowledging the lead role of Denmark in clean and green energy at global level, the minister said that Pakistan too is embarked upon tapping the huge indigenous potential of renewable energy. He said that Pakistan’s New Renewable Energy Policy would bring  opportunities for investors due to transparent policies of the incumbent government.

He said that the government had set ambitious targets to introduce 25pc renewable energy by 2025, and 30pc by end of 2030, including 45pc share of hydel power generation and 10pc of nuclear energy into the energy mix of the country.

While explaining the investment potential in the power sector, the minister said that the government would induct renewable energy-based power plants through open and transparent competitive bidding process, which would lower the cost of production of electricity.

He also apprised the envoy that the government had prepared the Indicative Generation Capacity Expansion Plan (IGCEP) 2047 for competitive market structure, generation, up-gradation of transmission, Smart AMI and modernization of distribution system.

The minister further informed that lowering of electricity cost for industries and establishment of Special Economic Zones (SEZs) would boost economic activity besides creating thousands of new jobs in the country.

The Danish ambassador, while appreciating the government’s commitment to raise the share of renewable clean and green energy, said that the new policy is more transparent as it provides a level playing field for all. She suggested setting up a joint energy platform to study the market, so that Danish companies would closely follow developments in the field of renewable energy and they could participate in the competitive process of renewable energy projects.