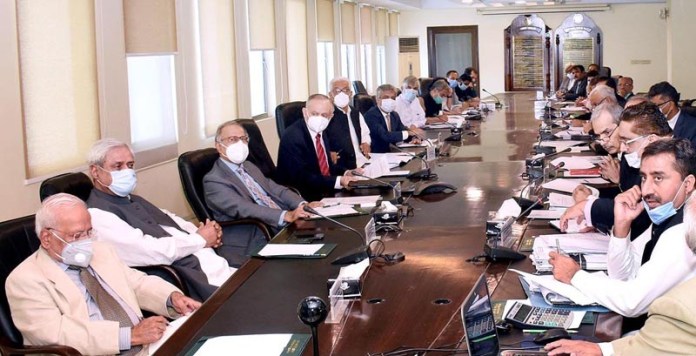 He stated this while chairing the National Price Monitoring Committee (NPMC) meeting, which was held on Monday to review the price trend of essential commodities, especially wheat, sugar and edible oil, during the week.

The finance secretary briefed the meeting about the Sensitive Price Index (SPI)-based weekly inflation, noting a decline in the prices of wheat flour, vegetables and eggs due to coordinated efforts of all provincial governments. On the whole, prices of eight items registered a decline, whereas that of 24 items remained stable during the week, he added.

Meanwhile, the food secretary briefed the NPMC that the current stock of wheat was sufficient for domestic consumption, while the average per day release by the provinces was also satisfactory. The prices of wheat flour registered a continuous decline due to improved release of wheat (per day) and its steady supply across the country, he outlined.

The finance minister lauded the coordinated and consolidated efforts of the federal and provincial governments for uninterrupted provision of wheat throughout the country.

Industries & Production Minister Hammad Azhar on the occasion updated the NPMC about the significant decline in international prices of palm oil and soybean, which would eventually reduce the recent upward pressure on the prices of edible oil in the domestic market. The committee directed the industries ministry to take necessary measures to ensure that the recent reduction in international prices of edible oil was passed on to the domestic consumers effectively.

Azhar further informed the committee that the retail price of sugar has witnessed a decline during the week under review, and would reduce further as imported sugar would soon be available in the domestic market. The NPMC appreciated the efforts of all relevant authorities to ensure sufficient stock of sugar in the coming months.

Moreover, a member of the Pakistan Bureau of Statistics informed the committee that provinces are on board for smooth implementation of the newly developed dashboard of prices of essential items. Steps are being taken to make the system fully functional for monitoring price disparity across the Provinces, he added.

The Finance Minister emphasized a proactive role on behalf of all authorities concerned to ensure the smooth provision of essential items at affordable rates to the general public.