Pakistan, Germany agree to enhance cooperation in IT sector 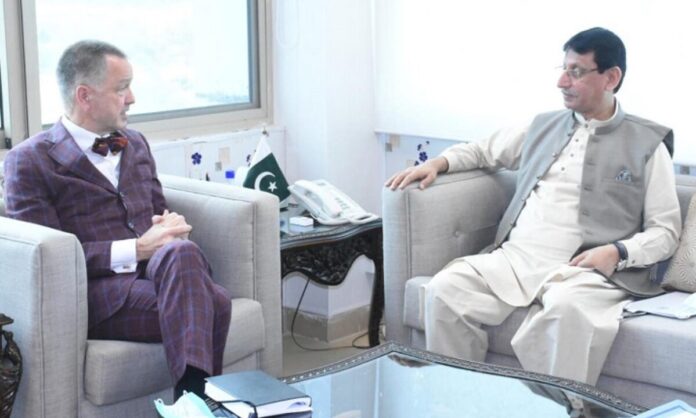 ISLAMABAD: Pakistan and Germany have agreed to enhance cooperation in the information technology (IT) and telecommunication sector.

The understanding was reached during a meeting between Federal IT and Telecommunication Minister Syed Aminul Haque and German Ambassador to Pakistan Bernhard Schlagheck on Wednesday.

Welcoming the ambassador at his office, Aminul Haque said Pakistan greatly values its relations with Germany and wants to enhance cooperation between the two countries in the field of IT and telecom. He said that steps were underway to fulfill the vision of Digital Pakistan.

He said that his ministry was taking concrete measures to develop the country’s IT and telecom sector, which was why information and communication technology (ICT) export remittances surged 40pc to $958 million in July–December FY21 as compared to last year.

He urged the German IT and telecom companies to invest in Pakistan as the environment for investment in the latter was conducive.

The German ambassador appreciated the IT minister’s role in the development of Pakistan’s IT and telecom sector.

IT & Telecommunication Secretary Shoaib Ahmad Siddiqui was also present in the meeting.

The federal minister said that the Ministry of IT & Telecom is fully committed to ending the digital divide between urban and rural areas of the country. “Steps are being taken through Universal Service Fund (USF) for the provision of broadband services in unserved and underserved areas of the country,” he added.

The minister said that empowerment of women and youth was the motto of the IT ministry and that it fully supported ITU’s proposed agenda to launch initiatives like Giga and Smart Villages in Pakistan.