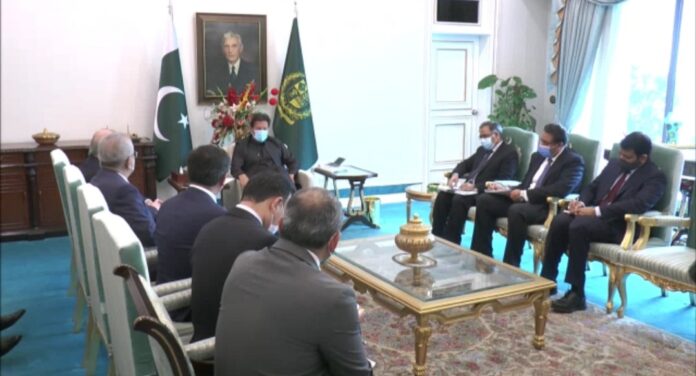 ISLAMABAD: Pakistan will facilitate Uzbekistan in gaining access to the seaports of Gwadar and Karachi in a bid to enhance regional connectivity and trade.

An announcement in this regard was made by Prime Minister Imran Khan during a meeting with Uzbek Foreign Minister Abdulaziz Kamilov at the PM House on Wednesday.

“Pakistan could prove as a gateway to landlocked Central Asia,” the PM stated, inviting all Central Asian Republics (CARs) to benefit from the shortest route to international seas.

He expressed Pakistan’s resolve to forge closer ties with Uzbekistan and other CARs in areas of trade, investment, energy, and people-to-people exchanges.

Expressing appreciation for the proposed trans-Afghan railway project between Pakistan, Uzbekistan and Afghanistan, the PM underscored Pakistan’s commitment to supporting all efforts for early realisation of the important connectivity project.

The prime minister fondly recalled his interactions with President Mirziyoyev in Beijing and Bishkek, reiterating his invitation to the Uzbek president to visit Pakistan.

Underlining the historic and civilisational links between the two countries, the prime minister underlined that Pakistan highly valued its close fraternal ties with Uzbekistan and wished to deepen bilateral cooperation in all areas.

He particularly emphasised that enhanced trade and regional connectivity were the cornerstones of economic growth and development.

In the context of South Asia, he underscored that durable peace and economic development in the region hinged on peaceful resolution of long-standing unresolved disputes.

He also handed over a letter from the Uzbek president to Prime Minister Imran Khan, inviting him to participate in the Central Asia-South Asia Connectivity Conference in Tashkent in July 2021.

The prime minister thanked him for the invitation and mentioned that he was looking forward to visiting Uzbekistan.