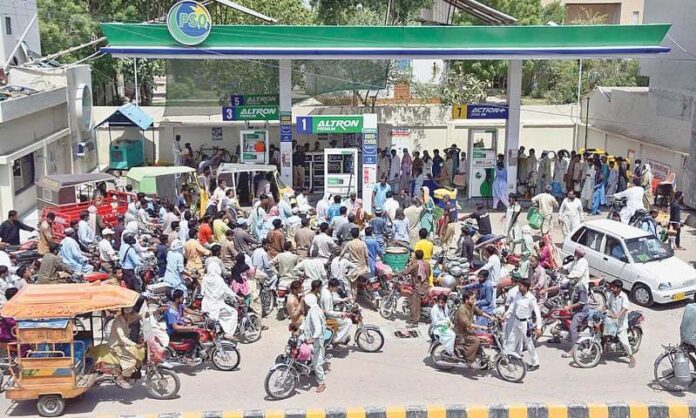 ISLAMABAD: The government has directed the Petroleum Division to take serious action against oil marketing companies (OMCs) and others involved in the petrol crisis of June 2020, which caused billions of rupees loss to the national exchequer.

According to sources, the government has directed the Petroleum Division to make all necessary arrangements, including legal and administrative, to bring the culprits to task and to avoid such incidents in the future.

“The government has tasked the division to take necessary action against OMCs and fuel stations, besides introducing legal reforms/amendments in laws/rules/procedures and its placement before the Cabinet Committee for Disposal of Legislative Cases (CCLC),” an insider said. “The government’s directives came in light of recommendations of an inquiry conducted by the Federal Investigation Agency (FIA) on petrol crisis of June 2020.”

Although the FIA’s Inquiry Commission had recommended action against officials of the Petroleum Division, including petroleum secretary Mian Asad Hayaudin, for the petrol crisis, the government has so far kept a mum on the matter.

According to sources, the country-wide petrol crisis in June last year had caused more than Rs15 billion loss to the national exchequer, whereas “OMCs made huge profits during the said crisis”.

The FIA had held some OMCs responsible for fuel shortages through illegally halting supplies of stocks to petrol pumps following the government’s announcement of a large cut in retail prices to pass on the benefits of plunging global oil prices to the people. All those firms which were involved in this unlawful act had made between Rs6bn and Rs8bn (in profits) by holding back stocks while those which were not involved in crisis accrued losses of between Rs7bn and Rs8bn each as they continued their supplies to pumps during the said month.

The FIA had further recommended departmental proceedings against top hierarchy of the Petroleum Division, dissolution of the Oil and Gas Regulatory Authority (OGRA) and a halt to the operations of refinery and oil marketing company Byco.

In addition, the inquiry commission’s report also estimated over Rs250 billion worth of oil smuggling from Iran and noted that a wide range of operations in the oil sector were against law, operating in vacuum and without any check and balance.

The FIA inquiry commission, headed by Abubakar Khudabakhsh, the additional director general of FIA, was constituted by the prime minister last year. It originally comprised seven members, including those from investigating agencies, former members of OGRA and attorney general, but later co-opted eight other experts to complete the task.

The report stated the petro division’s decision to impose a ban on petrol import in March 2020 was wrong in the first place from strategic and policy perspective, but OMCs violated it. It said that when the ban was imposed, petrol prices were at the lowest ebb in the international market and Pakistan and its consumers were denied its benefit.

“The division and DG-oil failed to ensure lifting of stocks by the OMCs from February to April 2020. The OMCs simply refused to lift quotas from local refineries,” the commission noted.