We discuss Pakistan's first eCommerce Awards, the results from our survey of 14,000 consumers and plans for next year. 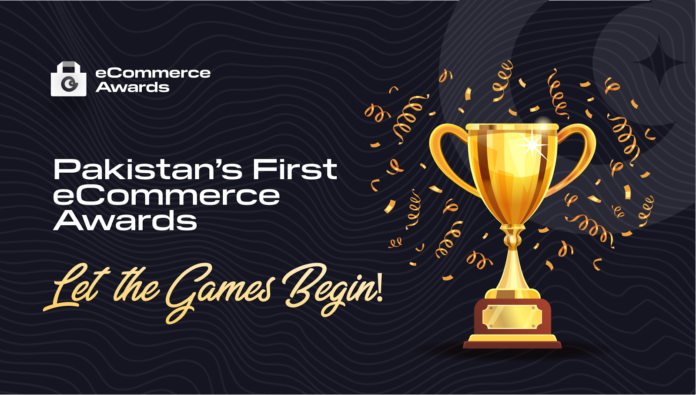 Pakistan’s eCommerce industry is tiny! The global average for eCommerce transactions as a percentage of total retail is in the 15% range (pre-covid). Digital-first economies such as China are expected to have the majority (>50%) of their retail sales now happening digitally.

Pakistan’s eCommerce sales in comparison are easily less than 1% of the retail industry. We have a long way to go, however, the industry has been growing rapidly and we wanted to help showcase the best eCommerce startups locally by hosting the first eCommerce awards in Pakistan.

The industry does not work in a silo. eCommerce startups are supported by payment gateways, logistics companies, software houses, and many other digital tools and services that help them provide amazing experiences to consumers. For this reason within the first eCommerce awards, we created the Founder’s Choice Awards, where the founders of eCommerce startups could vote for their best service providers in the industry.

We wanted to achieve all of this while being as fair and transparent as possible. This is why our awards focused only on votes from consumers or customers of the services that are being given.

Finally, we wanted to understand from actual consumers what their thoughts and views were on the eCommerce industry. For that, we organised the eConsumer Research Survey

The objectives of the award were threefold

The Mechanics of the Awards

There were two categories of Awards.

The awards also had no profit motivation. No revenue was collected during the awards (quite the opposite). We also turned away offers of sponsorship from those who were themselves nominated to ensure we could not be biased into creating unfair or biased awards.

The Voters Behind the Results

In the Founders choice awards we had a total of 101 service providers nominated and of those 58 had received enough votes to be eligible for a medal. However, only 52% of eligible nominees won a medal, i.e almost half the nominees did not get a score of 3.5 or above from the founders of eCommerce companies. The awards were given based on the votes of over 80 Founders from across the industry.

In the Payment Gateway and National Logistics category voting was divided over 4 or 5 sub-sections.

The average score that payments gateways got for each of the voting categories was as follows:

We messaged over eighty thousand people who voted for the eCommerce awards and asked them to fill out a survey asking about their eCommerce preferences. 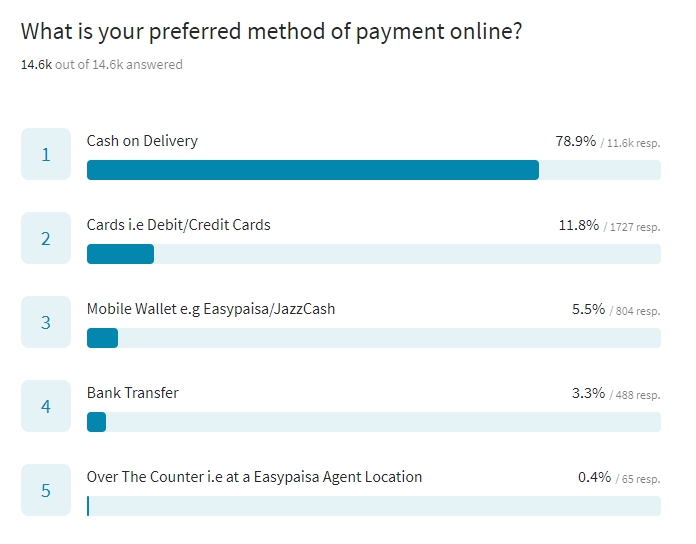 14.6k people responded. Some of the key highlights include that 79% of respondents prefer CoD over other payment methods and they prefer CoD as 42% have trust issues (option 2 & 3) and 33% do not have access to a means of prepayment. 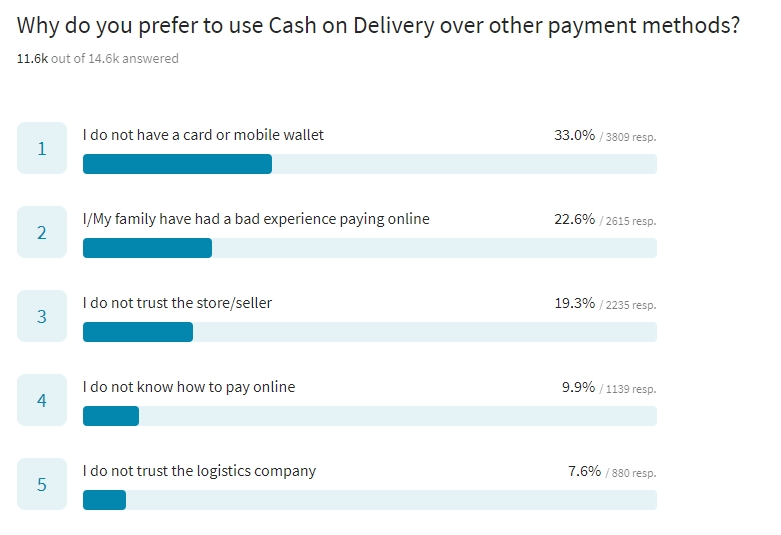 A large 63% of respondents would be willing to do prepayment if they received the first 3-5 orders in perfect condition. 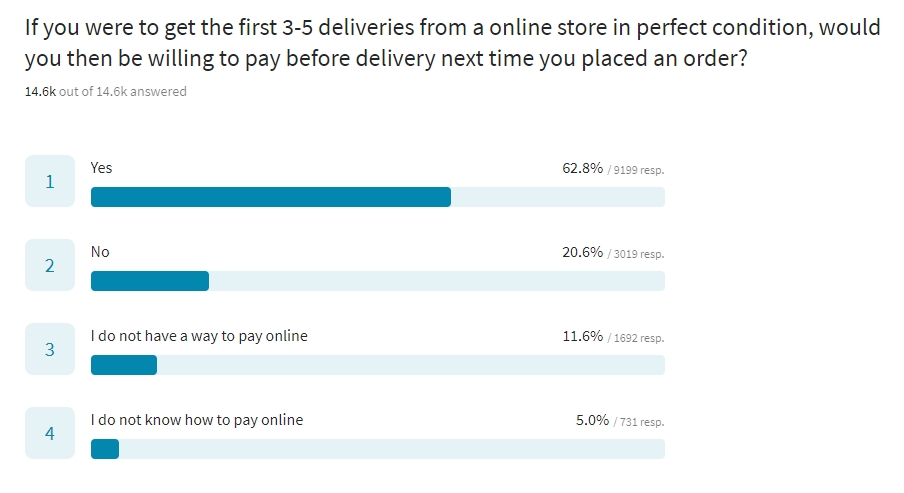 Over 64% of respondents have also not purchased anything above Rs 10,000. 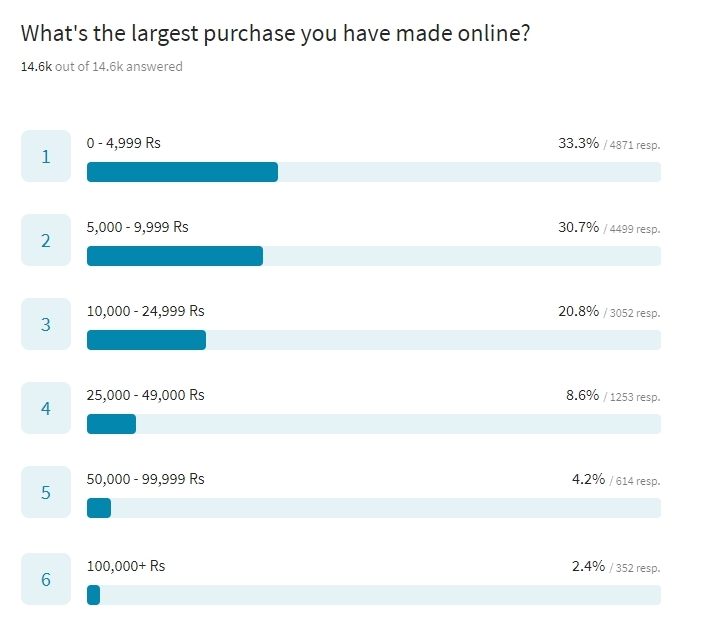 We will be sharing the results and adding more insights in a future post from this survey result.

In an effort to maintain transparency and fairness, the management committee had to make certain key decisions during the voting process and after the voting ended. All key decisions have been mentioned below.

Areas of Improvement for Next Year

For next year we will be also asking customers in the public choice awards to vote on a scale of 1-5 rather than just a simple vote. We feel that asking customers to give an actual score will result in more meaningful feedback for startups and it will also remove the competition element as you can then have multiple Gold, Silver, and Bronze winners in a  category, rather than just first, second, and third place prizes. We opted out from doing that this year because we wanted to keep the overall consumer voting journey as simple as possible. However, given the extremely strong voter turnout this year, we feel that we can add that level of complexity while still getting a large voter base.

For the Founders choice awards due to lack of development time, we ended up doing the vote via a 3rd party form sent via email to all nominees. Next year we will build the system directly into the awards website and ask people to vote as part of their nomination. This will result in a much higher percentage of nominees voting for the founders awards.

The overall UI/UX of the website needs to be streamlined a lot more to encourage voting, especially on mobile. This year on mobile devices you could only see one nominee at a time on the page.

To further improve the fairness and transparency of the awards we will also be bringing in an audit firm to tally the results. This will result in a trusted 3rd party ensuring that all votes were counted fairly and faithfully and be a double check on the count by the management team.

We believe the eCommerce Awards are an improvement first step to grow the industry and understand where our current limitations also lie. We should not be arrogant or boastful about where we are or how far we have come. Instead, we should realise the journey is still long and we need to move forward together as an industry and support each other.

If you would like to support us next year please do get in touch at [email protected] and or if you are a service provider who wants to better understand your exact results (without revealing the names of those who voted for you) we would be happy to oblige you.

Adam Dawood
The author has been running e-commerce companies for the last 8 years. His prior experience includes being the CEO of Yayvo.com, Managing Director of Kaymu.pk and the Product Manager at Daraz.pk. Adam is also the Founder of DYL Ventures a startup consultancy.

There was celebration all over the country when Commerce Advisor Abdul Razak Dawood tweeted that Pakistan will before long be added to Amazon's rundown...
Read more
COMMENT

The fault in our auditing environment

Despite the less than warm welcome he received from everyone, Dr Abdul Hafeez Sheikh has left the economy better than he found it
Read more
COMMENT

Who knew that in the age of technology, solutions exist that negate the need to blanket ban apps just so a few sociopaths can’t coordinate their desire to channel the devil while he’s locked up? Public affairs teams need to step up their game or hire a local expert to represent them
Read more
- Advertisement -