Two roads to be constructed at a cost of Rs70bn 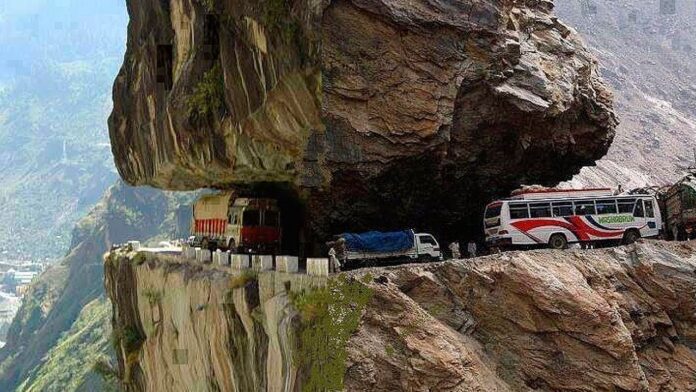 The executive committee of the National Economic Council (ECNEC), which met here with the Federal Minister for Finance and Revenue Shaukat Tarin in the chair, approved the Gilgit-Shounter road project and Astore-Shounter (AJK) road projects at a cumulative cost of over Rs70 billion.

These regional connectivity roads would connect the strategically located northern part of the country with KP and AJK, ultimately linking it with the rest of the country.

According to details, Gilgit- Baltistan and AJK (Thallichi (GB) – Shounter (AJK)), widening and rehabilitation of Astore Valley Road, Package i-iv-103 km, package iv-vii-18km, and total length of 121km (package I to V& VII)) project was approved at the rationalised cost of Rs19.195 billion. The project is being sponsored by the Ministry of Kashmir Affairs and Gilgit Baltistan which is expected to be completed in three years.

Earlier, the National Highway Authority (NHA) was contemplating linking AJK with GB through the construction of a grand highway from Shounter in Neelum valley to Astore in GB. The proposed Shounter-Astore highway was expected to reduce the distance between AJK and GB by several hundred kilometers besides a reduction in traveling time by over eight hours.

The ECNEC has also approved the much-awaited project of construction of the 2016 kilometer Shandur-Gilgit Road at the cost of Rs49.946 billion. The project road is located in Gilgit- Baltistan province and will be executed by the NHA. According to officials, this road is also being considered another alternate route to CPEC as the same would connect the main corridor linking Khunjerab Pass.

Apart from the two inter-provincial connectivity roads, ECNEC has also approved dualization of Lilla Interchange (M-2) via Pind-Dadan Khan to Jhelum. The project was approved at the total rationalised cost of Rs12.760 billion.

The scope of work includes the construction of two bypasses, bridges over nullahs, culverts, and retaining/breast/toe walls. The project will be completed in three years.

ECNEC also directed that the Government of Punjab will fund the land acquisition cost, horticulture charges and Provincial Revenue Authority Tax charges through its own resources.

According to officials, the reconstruction of Turbat-Mand Road from M-8 to the Iranian Border-Radeeq 115km Project was approved at the total rationalised cost of Rs10.461 billion. The project is expected to be completed in two years by the Communications Department Balochistan (as a part of the South Balochistan Package).

The project starts from Gwadar-Ratodero Motorway to Kurumb (Iranian Border) in Balochistan.

The construction of Panjgur-Gichak-Awaran Road was also approved at a cost of Rs14.68 billion. The project was approved after discounting the security cost, land acquisition cost, reduction of design consultancy charges from 1.6 per cent to 1 per cent excess in quantities. The Government of Balochistan will make security arrangements for the project and acquire land through its own resources.

The release of PSDP funds for the project will be conditional to the Government of Balochistan, allocating a minimum road maintenance budget of Rs5 billion for FY 2021-22 and onwards for its provincial highway network.

Moreover, dualization of the Khuzdar-Kuchlak section of the National Highway (N-25) was also approved at a PC-I cost of Rs81.582 billion. The project will be constructed through districts Khuzdar, Surab, Kalat, Mustang, Quetta, and Kuchlak in Balochistan. The National Highway Authority will be the executing agency.

Sindh Early Learning Enhancement through Classroom Transformation Project was also approved at the estimated cost of Rs27.162 billion. The Sindh School Education and Literacy Department will sponsor the project which will benefit 12 districts of Sindh.

The project is expected to be completed in five years.

Gish Kaur Storage Dam was also approved at the total cost of Rs11.789 billion. The dam will have a storage capacity of 0.04580 Million Acre Feet (MAF) and will provide irrigation facilities to 13,800 acres of land. The project is expected to be completed by 2025.

The construction of the Panjgur Storage Dam Project was also approved at the total cost of Rs12.870 billion. The Ministry of Water Resources will sponsor the project which is located on the Rakhshan River.

Furthermore, the ECNEC also approved the Awaran Dam Project at the total cost of Rs14.86 billion. The project will be sponsored by the Ministry of Water Resources, whereas the Irrigation Department of the Government of Balochistan will execute the project.

The Establishment of the University of Applied Engineering and Emerging Technologies (UAEET), Sialkot, Punjab was also approved at the total cost of Rs16.648 billion and will be financed through the Annual Development Programme 2021-22 of the Government of Punjab.

The establishment of IT Park, Karachi was also approved by ECNEC at a cost of Rs31.199 billion. The project will be executed by the Pakistan Software Export Board (PSEB).

Furthermore, the Pakistan University of Engineering and Emerging Technologies (PUEET) Phase I was approved in principle at the total cost of Rs23.551 billion. ECNEC directed that the cost of the project may be further rationalised in three months and the committee should be informed within the same time.