After hitting Karachi, the donut revolution is coming to Lahore

With franchises like Dunkin Donuts losing popularity, O Donuts is coming to Lahore and does not want to stop there 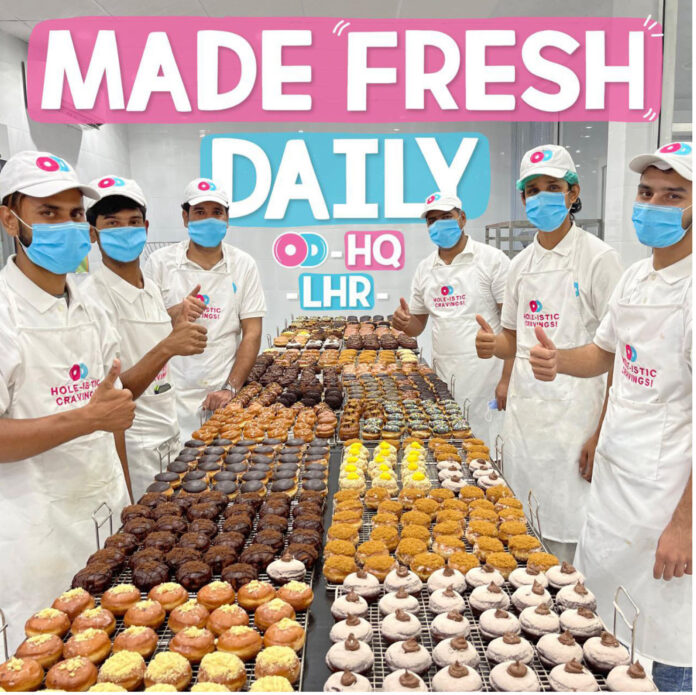 All three of these franchises significantly changed the culinary landscape of not just Lahore, but the entire country. Crowds milled outside their stores for their opening, people made reservations to eat at Pizza Hut, local fast food restaurants started shuttering up and very quickly these chains started spreading all over the country. It was a fast food revolution, a complete overhaul in which Pakistan was entering the auspices of being an American ally and thus being open for business.

So when Dunkin Donuts decided it would allow franchises in Pakistan, it had examples to learn from. Pizza Hut, McDonalds, and KFC had all become wildly successful, and all of them had started in Lahore. Dunkin Donuts had a very different product, but Lahore was hungry for more products straight from America. The only question was how Dunkin Donuts would present itself. One must remember that at this point, while it was fast food, the newness and curiosity surrounding these American franchises meant eating at these places was considered an excursion of high society.

So when Dunkin Donuts opened its doors to the Lahori public in 2000, they did so in the still developing but very new-money area of Defense. Very quickly, they too became incredibly popular. Except what they had going for them other than having American brand value was that they were also a coffee shop with bright orange colours which were the height of aesthetic appeal in the early 2000s. Dunkin Donuts now became a ‘cool’ spot. It was where you went on first dates and where you got a box packed to take as a gift to someone’s house.

But in the past two decades since Dunkin Donuts has opened, it has not seen the kind of success that KFC and McDonalds have seen. KFC currently has more than 92 outlets all over Pakistan, and McDonalds has nearly 80 outlets. Pizza Hut has fallen behind on this front, but that is mostly because it has been beaten by Dominos, another foreign chain that now has nearly 50 locations across the country. In comparison, Dunkin Donuts has 12 branches in Lahore and Islamabad combined, and 10 in Karachi and its surrounding areas.

The surprising thing, however, is that unlike Pizza Hut, Dunkin Donuts’ failure to expand convincingly has not been because competition has beaten them out. There is no other foreign franchise chain selling donuts and coffee, even though many shops have opened locally and done decent business. Now, however, it seems that local donut chains born and developed in Pakistan are about to give Dunkin Donuts and other local donut shops a serious run for their money. 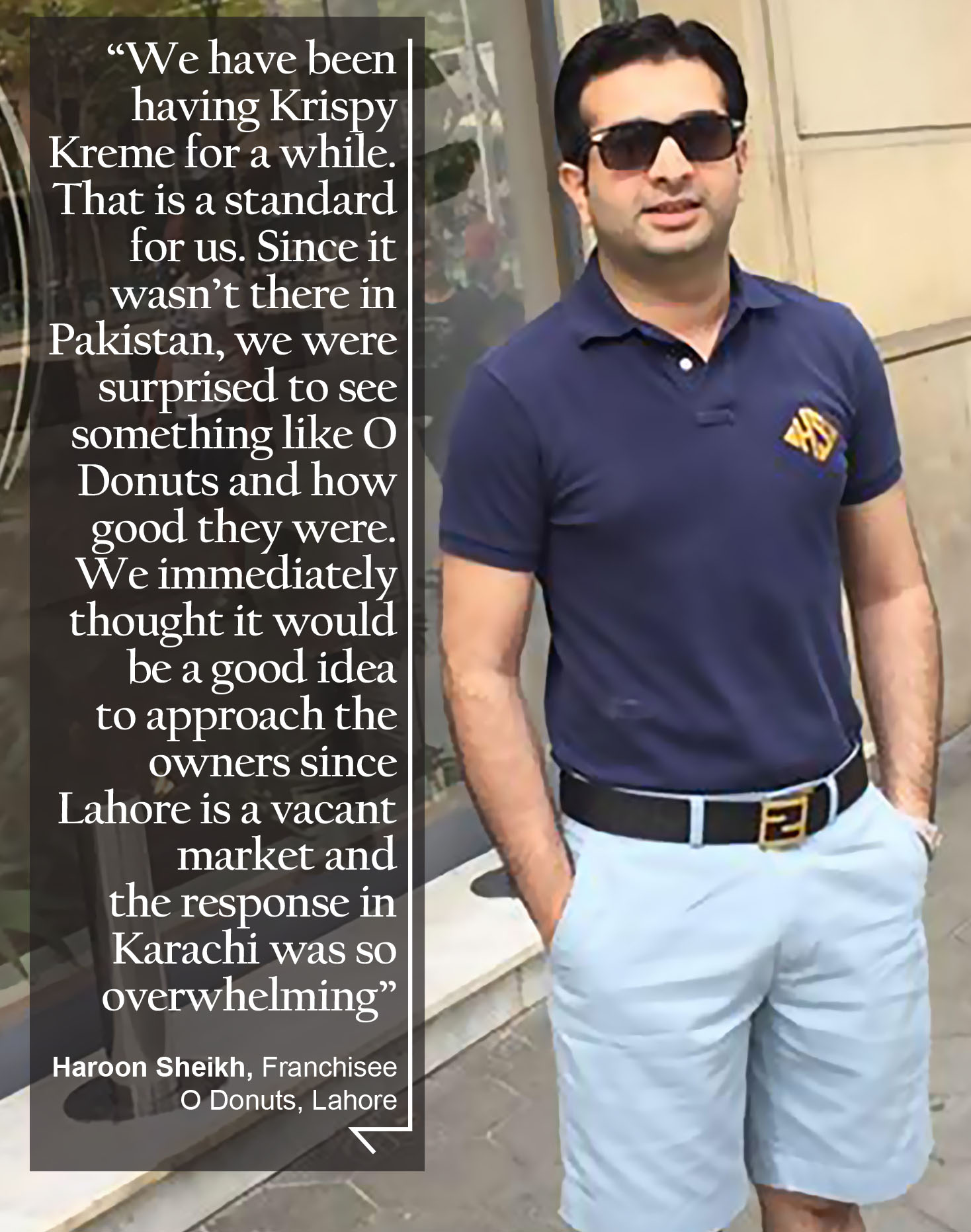 At the helm of this charge is O Donuts, known more commonly as OD Pakistan. And unlike Dunkin Donuts and all of these other chain franchises, their story begins in Karachi, where they began operations two years ago and already have more points of sale than Dunkin Donuts with 14 branches where their products are available. Long gone are the days of Lahore being the center of new kinds of food in the country, and the ancient City now very much takes its culinary cues from the coastline metropolis. Which is why two franchise branches of O Donuts are set to open in Lahore in around a month’s time around Eid. And if their wild popularity in Karachi is any indication, they are about to be the next big thing in Lahore’s food landscape.

O Donuts started because there is no Krispy Kreme in Pakistan. Krispy Kreme, for those unaware, is another American donut chain famous for being better and more popular than Dunkin Donuts. Somehow, however, they have never shown any real interest in Pakistan, despite rumours in 2019 that they were looking to move into Pakistan. When the popularity and as a result the quality of Dunkin Donuts began to fall in Pakistan, people visiting abroad began to bring back boxes of Krispy Kremes to show people how good donuts could be. And while Krispy Kreme had no intention of coming to Pakistan, people were already starting to get ideas.

Small artisan donut shops began opening not just in Karachi, but also in places like Lahore. So when O Donuts finally did start opening in Karachi, people were ready for it.

“The first time we tried O Donuts was in Karachi, and the first thing we noticed was how much like Krispy Kreme the experience was” says Haroon Sheikh, the owner of the O Donuts franchises coming to Lahore. Along with his partner, Salman Akram, he is planning to launch O Donuts in Lahore and then expand it all over Punjab and in Islamabad.

“We have been having Krispy Kreme for a while. That is a standard for us. Since it wasn’t there in Pakistan, we were surprised to see something like O Donuts and how good they were. We immediately thought it would be a good idea to approach the owners since Lahore is a vacant market and the response in Karachi was so overwhelming.“

The decision was a big one, particularly since it is a strange business to switch to for the partners, who for more than three decades have been in the high pressure die casting business, in which they manufacture spare parts and products for clients like Honda Atlas. “It is a big shift, but the environment is more favourable to something like the food business these days. We had some friends in Karachi who knew the parent company of O Donuts, so after trying them, we got in touch with the owners and they were also excited by the prospect of spreading their brand to Lahore,” says Sheikh.

The prospect happened to be a good one. There was nothing mainstream in Lahore like O Donuts, and the popularity of Dunkin Donuts has been on the decline in the city. While there are options like Gustosos and places like Kyle’s Coffee that offer artisan donuts, there really is a lot of space to grow something like O Donuts. And generally, food places that come to Lahore with a Karachi approved tag tend to do well.

Currently, O Donuts in Lahore does not have any branches. You can go to their instagram page and message them to inquire about an order, or you can call them on their helpline and place an order that will be delivered to you the next day. And that is only for now, already work has started on two branches, one on MM Alam road and the other in Y block defense – both the most likely spots to attract customers for this kind of product.

However, as the owners explain, the response has not just been impressive, it has been diverse. “We wouldn’t say it was a challenge because we made sure we were ready before launching, but with things like this, you can never foresee volume. It was a lot more than we expected, but we had the capacity to deal with it. The most heartening thing was the fact that we were getting these orders not just from Gulberg, Model Town, and DHA, but also all the way in Bahria Town, Shahdara, Shalimar, and other locations. We have very high hopes because of this, and this response is exactly what has encouraged us to go ahead and open these two branches so soon,” says Sheikh.

The most important thing here, of course, will be quality control. This is the hallmark of any good franchise agreement, which is the deal Sheikh and Salman struck with the owners of O Donuts in Karachi. The franchise agreement they have is such that they are the ‘master franchise’ for Punjab and Islamabad. This means that while they own the franchises they are opening and will pay royalties to O Donuts in Karachi, anyone else that wants to open a franchise in Lahore or Islamabad has to come to them instead of going to Karachi. This means that Haroon Sheikh and Salman Akram can either give out franchises in this region to other people or choose to control the scale and map of the brand’s expansion completely. It also means that where they have to comply with the standards established by the original owners in Karachi, they will also have to learn how to monitor that standards are being maintained.

“Our staff trained with the staff from Karachi, and our focus is on making sure that you get the same product in Lahore that you would in Karachi,” explains Sheikh. “We have set-up our own production plant here since the freshness of the donuts is important. Everything is the same. We use the same ingredients. This is a brand so quality is essential.”

With the sort of response that they have gotten, Haroon Sheikh and Salman Akram do believe wholeheartedly that this will take off in Lahore. “There are two factors to this. The first is that it is a Pakistani brand and people want to support local businesses. Then there is the innovation. We are not following the set patterns that international franchises follow. We are a local business which is why we make more efforts to reach out to people and to try and understand what it is that our customers want and need from us. What their preferences are and how we will get them through the door and keep them coming back for more. This is a completely different product from what is available in the market right now,” they say.

“And our plan is to keep innovating and to keep everyone on their toes. We welcome competition, and we want there to be healthy competition so we can keep improving, but the reality is that right now there is no other company like ours in Lahore, and while our core product will remain the same, we are also going to move into diversifying and bringing out products like ice cream, sandwiches, breakfast menus, cookies, and coffee.”