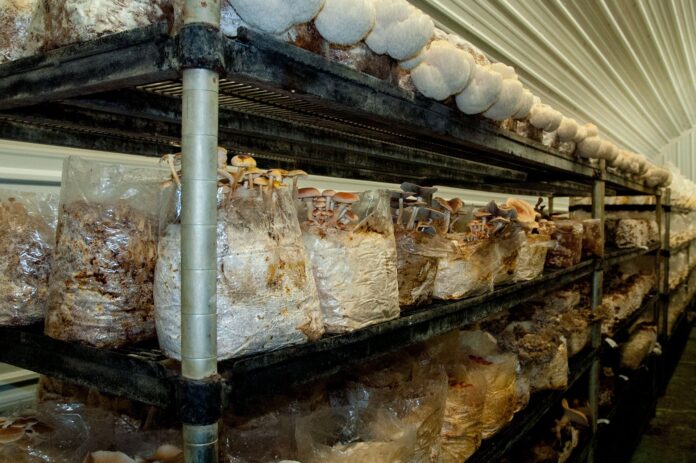 PESHAWAR: The government has started mushroom cultivation to generate income opportunities and discourage poppy cultivation in the remote Tirah Valley of Khyber district.

In this regard, a training session on mushroom cultivation was organised in January 2021 with the technical assistance of the Nuclear Institute for Food and Agriculture and Biology (NIFA) under the auspices of the Orakzai Scouts 235 Wing in which 30 local farmers participated.

Speaking to Profit, Tirah Mushroom Club Marketing Manager Ehsanullah said that at present, they only have oyster mushrooms available at Rs300 per 500 grams; however,
other types of mushroom will be introduced soon.

Agriculture is the main source of income for the majority of the population in Tirah Valley but the farmers are dependent on poppy crop and locals are now looking for low-cost, high-income, legal job opportunities.

A farmer, Fazal Rabi, said that he was facing financial problems when he returned to his area a year after the being displaced due to militancy, adding that he found the mushroom crop as a good source of earning living in his trying times.

Principal Scientist Group Leader Dr Muhammad Ibrahim, who is in charge of Food and Environmental Safety and Mushroom Programme at NIFA, has trained local farmers in Tirah with the help of security officials.

He said that the valley has best climate for mushroom cultivation and although no concrete research has been done on how to increase their production to date, a few locals have found ways to do so.

According to Dr Ibrahim, oysters mushroom are produced in large quantities in Pakistan. In some places, domestic mushrooms are also harvested, while some other valuable varieties are being cultivated after experiments.

Thirteen Mushroom Club Project Manager Karamat Ullah Afridi said that an awareness campaign was launched in the area to attract people to cultivate mushrooms and a regular training programme was also organised. “People are taking interest in low-cost, high-income business and on the other hand as there is no source of income for them,” he said.

According to Dr Ibrahim, mushroom seeds are produced in NIFA’s laboratories, which are provide to farmers at a discounted price. One kg of seed is providing at Rs1000 while the market rate is Rs1800 to 2500 per kg. Most farmers buy non-certified seeds from the market which affects production.

He said that with the financial support of the Pakistan Science Foundation (PSF), the necessary secessions for awareness, training of farmers and provision of seeds will be started soon in tribal districts.

Furthermore, he said that the project was aimed at promoting mushroom cultivation in tribal districts and providing employment opportunities to the people.
According to the KP Agriculture Department, 32,000 acres of land is under cultivation in Tirah Valley, of which 80 per cent is under poppy cultivation, six per cent under vegetables and while the rest of land is under orchards and other crops.
The Department of Agriculture had planted saffron in Tirah on an experimental basis in 2016 and 2017 however; no major success was achieved due to limited resources.
The department has also planted mushroom in Buner and other districts but due to lack of awareness, local people have not yet paid much attention to this crop.
- Advertisement -
Facebook
Twitter
Linkedin
WhatsApp
Email
Previous articleSaudi Arabia plans FTA with Pakistan, 10 other countries
Next articlePak-Iran freight train service restored after two days