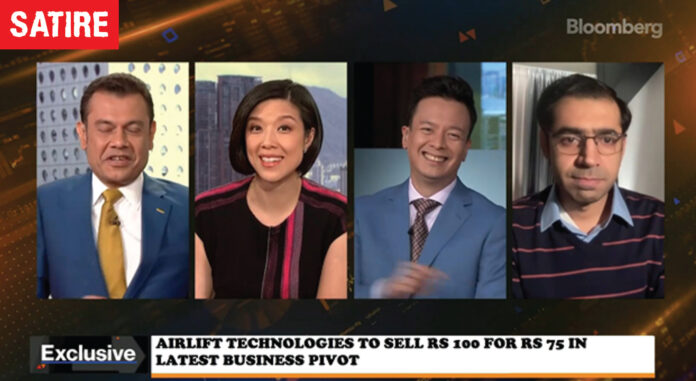 Airlift Technologies, the former bus company, former grocery delivery company, is seeking to raise funds for its latest pivot into the fintech sector.

“I sat on a table with a group of my partners and we decided that delivering groceries to people through an app isn’t something we really believed in, the way we all had sat together earlier when we had decided that selling bus rides through an app wasn’t a product that we believed in,” said Airlift CEO Usman Gul on Bloomberg, with program hosts visibly impressed by his responses.

“So we thought, what is a problem that we could solve,” he said. “And the idea suddenly hit us. We already had this insight that people would always want more money in exchange for lesser money. So why not use our cutting edge technology to do exactly that?”

“Only our CFO wasn’t on board and unfortunately we had to let her go, because I for one am a firm believer that the whole team needs to really believe in the product.”

“If we get this new funding, which we will, thanks to the VC’s deep-seated FOMO, we can guarantee immediate revenue growth and a dedicated, active user base that will keep growing. A sure shot unicorn in the making.” he said.

“Too early to be asking about profitability and viability of the business model,” he said, in response to a question. “Even asking questions like these reveals a silly, seth mentality that has no space in the exciting new startup world. Suffice to say that our unit economics are great and for now we are choosing not to be profitable to focus on growth.”

Aatif Awan of Indus Valley Capital, who was sitting right next to Gul throughout but out of the frame, then asked Bloomberg reporters if they wanted to invest in this round.

The above piece is a work of satire and does not present itself as the truth.

Why would a government venture into the high-risk business of venture capital funds?
Read more
FEATURED