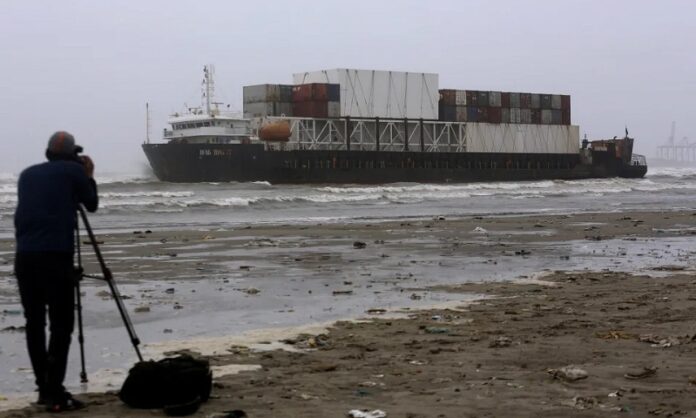 KARACHI: The cargo ship which ran aground and stuck off Karachi beach finally started floating again in deep-sea on Tuesday.

The operation to retrieve the Hang Tong 77 from the port city was at last successful after over one and a half months.

Two tugboats and a crane boat took part in the latest operation to salvage the cargo ship. The operation was completely carried out by Pakistani companies MAX and Ayyan Ship Breaking Company.

A foreign company would have cost the operation about $2 million but the Pakistani companies effort only cost one-fourth of that amount.

The Hang Tong 77, manufactured in 2011, stuck in the sand near Seaview Karachi due to a broken hanger on July 21. Registered in Panama, the ship weighs 2,250 tons and is loaded with containers.

According to a Karachi Port Trust spokesman, the ship came ashore due to high waves and a weak engine.

A day earlier, the plan draft for the rescue attempt had been sent to the relevant department.

The salvage master details, crane barge, two tug ropes and all the required information had been maintained in the plan sent to KPT for approval.

The letter said an experienced salvage master has been sought to help refloat the stranded ship off the Karachi coast. It also said more durable tug ropes have been sought to extricate the grounded ship back into the sea.

Since there will be high tide starting Sep 7, the new attempt shall take place today, it said.

Late last month, the salvage operation of a cargo vessel grounded at Karachi’s Seaview beach was put off to next month (Sep) after another rescue effort ended in failure.

The salvage operation of the ship has been deferred to the next month as the window of high tides in the sea has subsided with the waning moon, according to sources.

On July 30, the Pakistan Navy along with other maritime stakeholders had safely completed the defuelling process of a merchant ship that ran aground at Seaview.