The notifications tell us nothing new about the bank, so why all the secrecy? 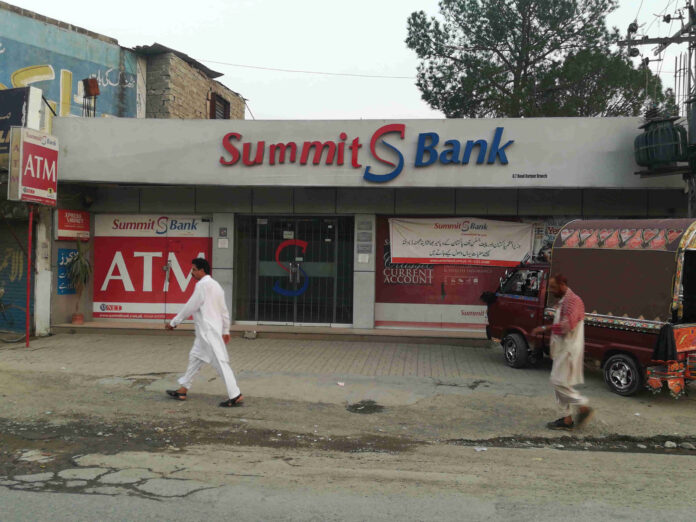 A lot can happen in three years. As an example, three years ago, Asad Umar was still finance minister, the rupee was trading at Rs150 to a dollar, and the word ‘pandemic’ was confined strictly to the history books.

But one entity stayed stuck in time – in limbo, as it were – and that would be Summit Bank. After essentially dodging the Pakistan Stock Exchange’s requests for financial results, and only releasing intermittent notifications here or there, in the space of just four days between October 11 and 14, the bank dumped 11 notifications on to the PSX, including the annual report for 2019. One almost fails to see what the secrecy was all about: the company recorded its greatest loss yet, at Rs9.4 billion. But it wasn’t that far off from the preceding year’s loss of Rs8.7 billion. And the report did not reveal some untold mystery that people didn’t already know about the bank.

What was unusual was instead information in another notification from the same time period: that Abdullah Hussein Lootah had sent an offer letter to Summit Bank asking for 51% voting shares, and new ordinary shares through fresh equity injection. The board agreed to handing over 5,976,000,000 ordinary shares without right to Lootah, and also increased the authorized capital from Rs28 billion to Rs90 billion.

The FIA’s investigation report revealed a pattern of flouting the law against money laundering on the part of Summit Bank employees, who appeared to be operating under direct orders from the founding CEO Husain Lawai. Turns out, Lawai and Zardari are old friends, and Lawai spent a considerable portion of the 1990s and 2000s in exile, fighting charges of money laundering on behalf of Zardari. He was exonerated of those charges in the UAE in 2002 and the charges against him in Pakistan were dropped in 2008.

The FIA alleged not only that Summit Bank failed to catch the money laundering going on through its accounts, but actively facilitated it through a procedure put in place by the bank’s CEO himself and one in which a large part of the bank’s staff was also involved.

The FIA also alleged that bank’s majority shareholder, Abdulla Hussain Lootah, a member of one of the oldest and wealthiest families in Dubai, may have been a beneficiary of the money laundering himself. As if this was not enough, the National Accountability Bureau went ahead and arrested Husain Lawai. For his part, Lawai maintained his innocence throughout.

And just to be clear, these were Summit Bank’s worries post 2018. It is not lik pre-2018 the bank was sailing smoothly. In the decade that it has been in existence, Summit Bank has posted a profit in precisely two years and has otherwise continued to hemorrhage money. Those two years happened to be 2014 and 2015. After Lawai resigned in 2016, Mohamad Zahir Esmail was appointed as President and Chief Executive Officer. But the bank made massive losses in both 2016 and 2017 – Rs2.2 billion and Rs1.1 billion respectively. And in 2018, the bank made a shocking loss of Rs8.9 billion.

The annual report finally gives an explanation for what happened: that the bank’s earning capacity has significantly depleted, because of volumetric reduction of earning assets together with the substantial amount of non-performing loans held by the bank, which resulted in a major reduction of the bank’s interest income.

“Due to the extraordinary situation faced by the Bank since July 2018, the Bank reduced its earning assets portfolio to meet the liquidity requirements. Moreover, the Bank’s interest expense registered an increase due to the increase in cost of funds, FX swap cost and finance cost of lease liability while there was reduction in the volume of interest bearing liabilities,” stated the report.

There have been attempts to revive the bank since then. For instance, a new CEO was announced in March:  Jawad Majid Khan, the previous group head of Emaan Islamic Banking at Silk Bank. Meanwhile, Summit Bank also recently decided to convert itself into a fully fledged Islamic Bank, and about 48 branches in 23 cities offer Islamic services. Perhaps the fresh equity injection will help the bank realize its goal. But turning over a new leaf as an Islamic Bank won’t hide the shoddy financial past, or the equally dodgy legal scandal.