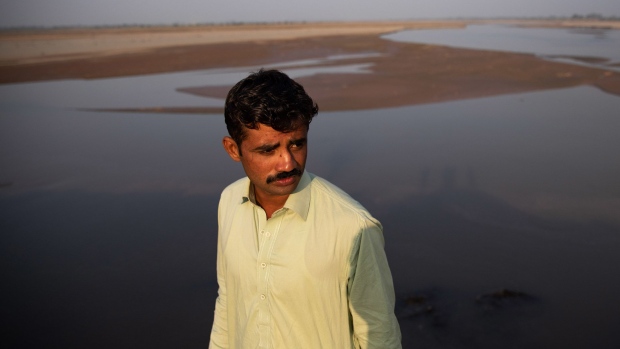 After the British divided Pakistan and India more than seven decades ago, Suleman Mohammad Sajjad Warraich’s father received a section of land on the outskirts of Lahore. It was a place to put roots in the new nation. Later on, Warraich and his family filled their 300 collective acres with vegetable plots, marigold gardens, and guava groves. The property was supposed to pass through generations. But early last year Warraich was told that the government would be acquiring the land. He’d be compensated, and his farm turned into something other than agricultural land. That didn’t sit right with him, so he filed a petition opposing the acquisition.

Warraich is among dozens of landowners petitioning against the government’s plan to build a megacity from scratch on the banks of the Ravi river, a once-thriving waterway that’s been depleted by pollution and dwindling water levels. The $7-billion endeavor would span 46 kilometers (29 miles) and include housing, commercial areas, hospitals and schools — creating a metropolis that could ease pressure on overpopulated Lahore and support its urbanization.

The Ravi Urban Development Authority, a government body created to manage the project, pitches it as a green initiative that will bring in much-needed resources to clean up the river. “The idea is to manage the area properly,” says RUDA’s Chief Executive Officer Imran Amin.

RUDA aims to build a man-made channel and a series of barrages along the Ravi’s path to control its water level, which the authority says will help conserve what limited flow remains and restore Lahore’s supply of groundwater. But some opponents are skeptical of those claims and what they see as a land grab by RUDA. The city’s high court halted the project last year — one ruling in an ongoing legal fight for the future of the river that could reach Pakistan’s Supreme Court.

“This is our property. We don’t want to sell it,” says Warraich, sitting on a white plastic armchair outside his farmhouse. “They are acquiring our land for a new city” where local residents won’t be able to continue farming, he says. “I don’t understand this logic.”

Pakistan’s leaders have been trying to develop the banks of the Ravi for almost a decade and Prime Minister Imran Khan has made the task a priority.

The Ravi river was instrumental to Lahore’s development, but today large pockets sit stagnant while other sections have dried up completely. A water-sharing treaty with India has limited its flow, while Pakistan’s own mismanagement has exacerbated the problem. For decades, the river has collected untreated sewage from Lahore, as well as industrial and agricultural waste.

In recent years, Pakistan has developed legislation to regulate water use amid warnings that the country will face water scarcity by 2025. According to a government study last year, only 39% of water sources across 29 cities were safe for drinking. Cleaning up the Ravi could help Pakistan forestall an impending water crisis — its basin is home to some 50 million people and the river irrigates about 7 million acres of land.

These short-term solutions, however, will run up against the climate clock. Most of Pakistan’s rivers are fed by melting snow from glaciers in the Himalayas, which are set to shrink as the world heats up. As global average temperatures rise beyond 2 degrees Celsius — a highly likely scenario based on current trajectories — the volume of Himalayan glaciers will be halved.

Global warming is set to increase precipitation across Pakistan, but climate models show the seasonality and intensity of those rains will become less predictable. That’s bad news for farmers given the vast majority of crops grown in Pakistan are dependent on reliable monsoon patterns. Though agriculture provides less than 20% of the country’s gross domestic product, it employs 40% of its labor force.

Pakistan isn’t the first country to try and solve its environmental issues with more development. Governments have plowed billions of dollars into eco-city initiatives everywhere from Malaysia to Iceland to simultaneously boost economic growth and adapt to a warming planet. The projects are marked by common features including more efficient public transport, green spaces and wastewater treatment systems.

RUDA says that Ravi City will follow the same mold and become a sister city to Lahore, helping to control its urban sprawl while reviving the river. A 2017 census put the population of Pakistan’s second-biggest city at 11 million, though unofficial estimates say it’s grown to about 13 million since. RUDA will take “all the proceeds from this zone which you are developing and put it in the water channelization, barrages and the wastewater treatment plants,” says Amin.

Pakistan has had some success with planned cities. Its capital, Islamabad, shares a larger metropolitan area with neighboring Rawalpindi — the way RUDA says it envisions its city relating to Lahore. The grid structure of Islamabad is drastically different from other Pakistani cities; traffic and pollution are better and the city feels orderly in a way Lahore does not.

But critics worry that the new city, which RUDA says will take 12 to 15 years to build, will replicate Lahore’s problems instead of fixing them — especially its inequality. They also say the government’s focus on building a new city could lead to further neglect in parts of Lahore. As the city boomed, it has stretched west toward the Ravi, spawning packed settlements around the river. The area’s population density contrasts starkly with growing wealth at the other end of the city, where single-family houses built on large lots in private communities extend far enough to almost kiss the border with India.

Lower-income residents in Lahore bear the brunt of the city’s environmental woes, living in areas with dirty water and bad air. Meanwhile, wealthier residents are protected in housing developments that operate like private businesses with separate water supplies. “It’s a very sad reflection of what has happened to our city because it has been totally commercialized,” says Fauzia Qureshi, an architect and urban planner.

The question for residents like Warraich who are being pressured to give up their land is whether the potential improvements and compensation will be worth it.

To create the proposed city, RUDA would sell land to developers, who would build on it under the government’s supervision. Opponents argue that the promised environmental benefits of Ravi City are being used to justify the government’s exercise of “eminent domain” — giving it the right to claim private property for public use — on land they fear will actually be used by private developers for commercial purposes. RUDA’s official land-use master plan sets aside space for a high-rise residential zone, business district, and area that will be called Sports City.

“There won’t be any forced acquisition,” says Amin from RUDA. “Unless it’s important where it’s [a] wastewater treatment plant or something which is necessary to be placed there and we will try our best” to give current residents “a fair market price.”

According to Section 45 of the Ravi Urban Development Authority Act, which outlines RUDA’s powers and functions, the authority may “use such force as may be necessary” to “eject any person in unauthorized occupation of any land or property vested in the Authority.” The document also gives RUDA power “to remove, demolish or alter” any building or structure as needed to realize development plans.

There’s no guarantee that those plans will help restore the Ravi.

Raising the river’s levels by creating a channel and barrages will have “almost no impact” on Lahore’s groundwater levels, says Vaqar Zakaria, an environmental consultant. The city’s water table will keep being depleted unless groundwater usage by housing developers and factories is regulated, he says, something that isn’t addressed in RUDA’s proposal. “Those who are bigger and richer can bore and get the water from the ground and a poor man can’t afford to do that,” Zakaria says. Ravi City “is going to benefit a small number of people, and it’s not going to add value to the average citizen.”

Environmentalists have also cast doubt on the other green pillar of the Ravi City plan: Lahore’s first wastewater treatment plant.

Untreated sewage flows into the Ravi from multiple points, and treating discharge from one area near the Ravi won’t fix the river’s water quality as a whole, says Ahmad Rafay Alam, a lawyer and environmental activist. “Nobody upstream changes their habits and you end up subsidizing pollution.”

Amin argues that housing developments are already being built in Lahore without environmental approval. If the area near the Ravi isn’t acquired by RUDA, it would be snapped up by developers who operate with far less oversight. At least, he says, “we make sure that it is planned according to the green standards.”

The case against development along the Ravi has been taken up by public interest litigators and lawyers representing landowners. They argue an environmental study RUDA presented in court was inadequate, and that the authority has failed to explain in detail what exactly the 100,000 acres of acquired land will become. Lawyers say a land-use master plan was only submitted in court last month.

Advocates also challenge the establishment of the Ravi River Development Authority, whose sweeping control they say is unconstitutional. The way the project is progressing is “unprecedented,” says Waqar Sheikh, a lawyer who argues that RUDA’s development plan doesn’t legally justify government acquisition of land.

Sheikh argues that it isn’t in the public interest to get rid of agricultural land since Pakistan already struggles with food shortages. Seventy-five percent of the Ravi river basin is used for agriculture, according to a study by the Asian Development Bank, and a large percentage of the city’s vegetables and dairy supply comes from areas along the Ravi.

RUDA now awaits a judgment from the Lahore High Court. If the project doesn’t get permission to go ahead, the authority will likely appeal the decision, sending the case to the Supreme Court. Meanwhile, some farmers have agreed to sell their land after negotiating better payments with RUDA.

Malik Ghulam Murtaza, a 56-year-old landowner, says he started to see the development more positively after compensation talks with RUDA. He believes the price he was offered will be enough to give his family a better life and he’s convinced the environmental plans will benefit everyone.

Others are still adamantly opposed. Haji Abdul Ghani, 56, is most upset about giving up cultivatable land, which he worries will be harder to come by. “This is all agricultural land, and will be lost forever,” he says. “If you really want to expand, look for barren land where the fertility of the soil doesn’t matter.”

Sitting near their house perched precariously near the river, Karamat Jutt, 26, and his family say they’ve already lost much of their land to floods last summer that destroyed an entire settlement. They know the volatility of the river and changing climate could make things worse, but, for now, their bigger concern is losing their livelihoods to development.

Warraich remains suspicious of RUDA. He says the agency labeled parts of his family’s land barren, despite it being viable for farming, and offered less than what he believes the land is worth. Even if more money was offered, Warraich says he wouldn’t sell because of the many tenant farmers and workers who rely on their land for subsistence. “Without justice there is no community,” he says.