The recent fall in IT exports, Pakistan’s great new hope, is a reality check posing a number of biting questions for the industry and authorities 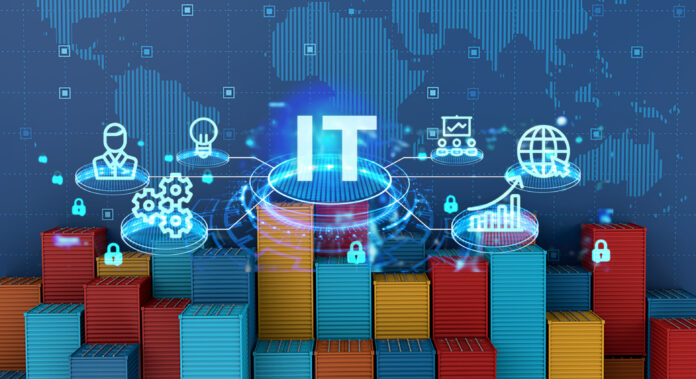 “What gave India the respect that they are interacting with the world today? It was their IT industry, which is why you people (Pakistani IT industry) are extra important,” Abdul Razak Dawood, the then Adviser for Commerce and Investment, said in January while praising the industry in his address to the Board of Investment (BOI) IT roundtable conference.

The optimism from back then may have fallen flat in recent times as IT exports and services for May 2022 were recorded at $189 million – decreasing by 27% compared to April 2022 and 8% from May 2021. The final numbers are still awaited, but the financial year 2021-22’s export target for the sector, around $3.7 billion, is likely to be missed by a massive $1 billion.

Many experts anticipated the end of what has been a dream run for the IT sector, primarily because of the unstable rupee and demand slowdown in the two key markets of North America and Europe.

“The post-Covid boom in the IT sector was partly because central banks across jurisdictions printed money and governments announced schemes to promote business activity. This led to demand creation, which translated into greater interest in the country’s IT sector by foreign businesses,” Asad Ghauri, President Asia-Pacific, and Group MD Europe at NetSol Technologies Inc, told Profit.

“Now, the focus is on contractionary measures, and as the funding dries up, demand is likely to plunge, resulting in a difficult next few months for the industry.” Ghauri added.

However, the industry has a consensus on the issue that these temporary jitters can do some permanent damage if the structural and policy flaws of the sector are not addressed.

The reservations of the industry stem from the lack of policy continuity and initiative by the government. An example is the reversal of the tax-exempt status of the sector in March 2021.

“IT industry, unlike traditional industries, operates differently. Changing the tax regime in the mid of the fiscal year, despite the original commitment till 2025, creates not only uncertainty and a state of panic about inconsistent policies but also raises questions about the understanding of the government about the gravity of the situation of how it will jeopardize the growth,” Pakistan Software House Association said in a statement on their website. 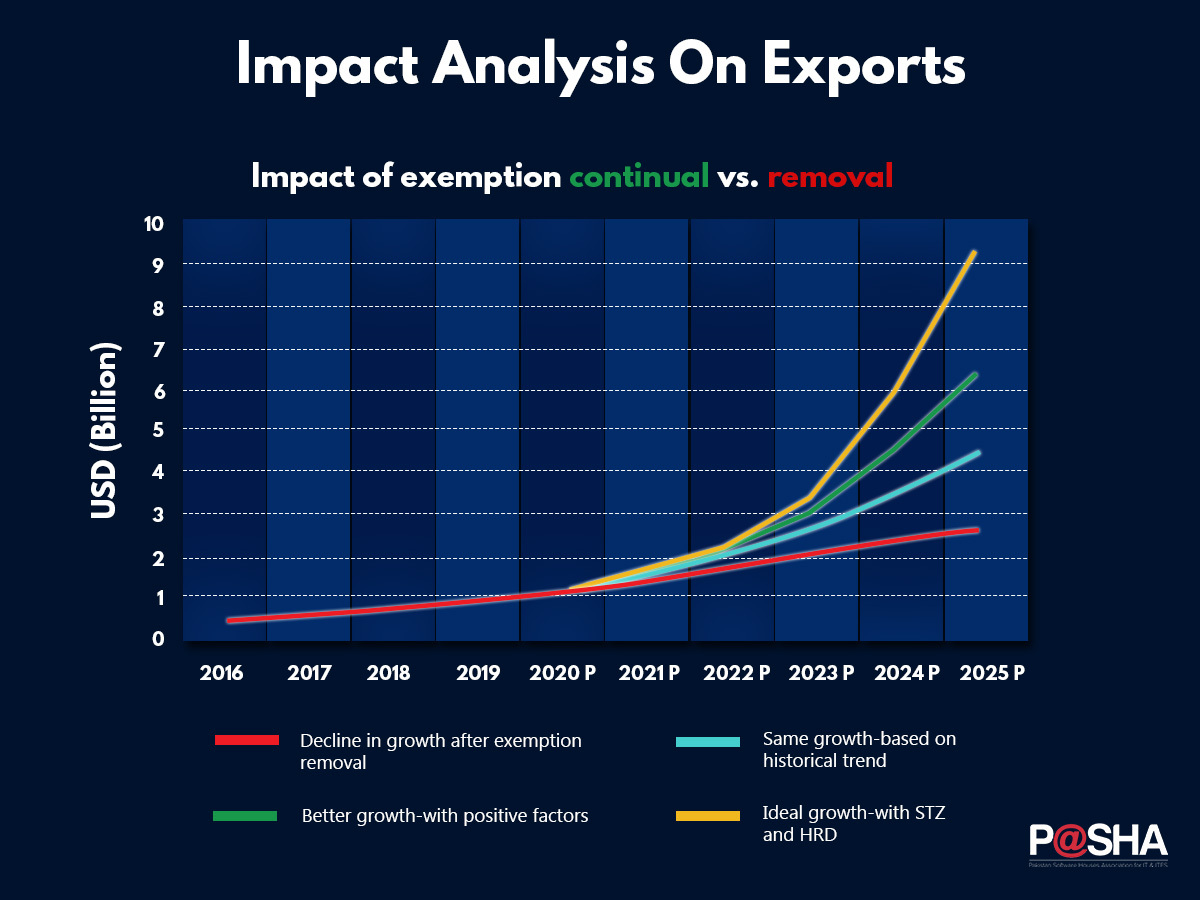 A new tax regime allowed 100% tax credit for IT exports on complying with certain conditions. This essentially was a zero tax regime but added additional caveats, including getting an exemption certificate that remained valid for six months.

It exposed the IT services exporters and freelancers to the Federal Board of Revenue (FBR) and probably the worst type of red tape in the country. Dealing with the FBR is an inconvenience even for the veterans of Pakistan’s business sector, let alone an IT industry still effectively in its nascent stage.

The industry saw hope when then Prime Minister Imran Khan announced an IT reforms package in February 2022 that proposed to revamp the IT regulatory framework through key amendments in the upcoming budget. Among the reforms was a promise to streamline IT sector taxation to facilitate technology services companies and freelancers. However, a few weeks later, the government was toppled, and the implementation of the reform package was never followed through.

Yet, this is not the only concern of the sector. One primary issue IT services exporters face is the free flow of dollars. Officially, the State Bank of Pakistan (SBP) allows around 30% to 35% retention of foreign currency from exports, but effectively the retention is about 10% due to bureaucratic hurdles.

Asif Peer, CEO of Systems Limited, in his address at the IT roundtable conference of BOI earlier this year said: “It is written that we can retain 35% of foreign exchange, but effectively we can only hold onto 10% of the amount.”

Another industry leader agreed, telling Profit that, “Even if the government has allowed 35% retention, one still needs to go to the SBP for it and state bank sey baat karna shuru karein tu 6 mahinay lag jatay hain ”

Forex retention is crucial for these businesses as they incur certain expenses, like business development, in dollars. Therefore, free-flow restrictions curtail their ability to respond dynamically to market conditions.

Does the government think about IT?

While the government changed, the problems remained, and those at the IT sector’s helm were keen to resolve them. So the industry sent budgetary proposals to the new government, and the officials gave assurances of incorporating those into the last budget. Yet the outcome was far from ideal.

The budget did not address the sector’s tax issues nor incentivise investment through flexible forex retention policies or export refinance schemes. This leads to the question of whether the government understands the industry or if it is so obsessed with other export sectors such as textile that IT is lost in the background.

It is evident from generic speeches government officials deliver at IT conferences that the understanding of how the sector works is quite bleak in the upper echelons of power. (Read more about it in Profit’s article: Startups are brave to operate in Pakistan – because the govt really doesn’t get them)

We saw an example of this last year when the FBR went after Payoneer (An American-based payment service platform popular amongst Pakistani freelancers) in a jurisdictional tax issue. Though the FBR might have a point from a legal perspective, how it was handled was chaotic.

A national newspaper reported the matter in the following way: “The Federal Board of Revenue (FBR) has said it has uncovered a ‘mega scam’ involving a foreign company transferring around Rs60 billion to more than 70,000 Pakistani citizens without the knowledge of the tax authority.”

The foreign company was Payoneer; the 70,000 individuals using it were Pakistani freelancers who already struggle with scarce payment channels.

The wave of fear and confusion gripped the freelancer community, as represented by a comment from a Pakistani user on a popular freelancing platform calling for everyone to prepare for FBR crackdown and get their documentation together to prove there was no wrongdoing.

Such erratic decision-making by officials weakens the confidence of those engaged in the sector – freelancers especially, who are encouraged to hold back their dollars or bring them in through non-official channels.

This is one of the reasons why large IT companies like Systems Limited have their holding companies in other jurisdictions. With the likes of Indonesia, Estonia, and Portugal issuing “digital nomad visas”, it will not be a surprise if freelancers also shift base, taking valuable remittances with them.

Parallel to the lack of policy intervention is the supply side issue. There is a genuine concern about the quality of IT graduates that Pakistan’s educational institutes are churning out.

“Our supply side is choked, and there is negligible government intervention when it comes to upskilling our IT workforce,” Naseer Akhtar, Founder, President & CEO of InfoTech (Pvt) Limited, told Profit.

NetSol’s Ghauri expanded on this: “Most of the graduates our universities are churning out lack technical skills and basic communication skills, e.g., writing an email or interacting in English with foreign clients.”

The supply constraint also explains why the rapidly depreciating rupee, which makes Pakistani products cheaper for foreign buyers, is not equally reflected in export growth.

Gonzalo Varela,  a senior World Bank economist, touched on this conundrum in an article for Profit: “If you were exporting recycled cotton towels and the rupee depreciated, you’d now get more rupees per towel. But scaling up takes financing for that extra machine to recycle the yarn and the plant expansion.”

This same holds true for the IT sector as it fails to respond to market dynamism due to a shortage of skilled workers.

At the end of the day, the onus does not only lie on the government. The industry has also played its part by not scaling at the required pace.

“We as an industry are very reluctant to build and scale. Organic growth might not enable you to acquire that skill set; the M&A (mergers and acquisitions) will help the industry grow faster,” Asif Peer urged the industry leaders at the BOI conference.

Those who acknowledge the shortcomings of the industry say: “We can’t compete with the likes of India and Indonesia on numbers. They have a larger population and a robust IT education infrastructure dating back to the 90s. What will sustain us is differentiation and creating an identity at a global level.”

Most observers state that the situation screams for reforms and the major players in the sector need to understand that these are unprecedented times for Pakistan’s IT ecosystem. The demand is high, and the firms need to double down and scale.

For the policymakers, the time is to act. The Pakistan Development Update, published by the World Bank, suggested the following measures for the revival of exports: Reduce restrictions on foreign currency outflows, increase the $400,000 outflow limit beyond which approvals are required to incentivise firms to register export proceeds in Pakistan, allow firms to maintain greater portions of export proceeds in foreign currency accounts, collaborate and agree on a curricular update with professional and technical advice, recognise credits from internationally quality-accredited online courses (e.g., focusing on the IT sector, coding courses from Coursera and EdX) and support upgrading of firms’ capabilities, focused on new exporters.

One would think these should be simple enough for authorities to do. But then, nothing is ever simple in Pakistan, is it?