Net auto financing contracted by 2.2pc MoM in August from July showing a reduction of Rs8bn

LAHORE: The State Bank of Pakistan (SBP) has released its credit data for the month of August, 2022. Net automotive loans have reduced by 2.2 per cent month-on-month (MoM) from July for a contraction of Rs8 billion.

This amounts to the single greatest contraction ever recorded since the SBP began publishing its credit data in June 2006. 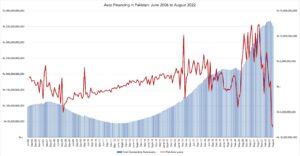 It is pertinent to note that the negative value does not mean the banks did not engage in any lending. “If the number of car loans maturing are higher than the number of cars being financed, which is the case currently, then the payoff portion will be much higher than the fresh booking” explains Habib Metropolitan Bank’s head of consumer banking Babbar Wajid, when asked by Profit.

“Auto loans are a pretty big component of consumer lending in Pakistan, and a big chunk of it is paid off in principal repayments. Fresh loans are either not being taken out, or are being taken out in very low amounts which is why it looks like there has been a very big drop” continues Wajid. “We all know that auto loans have dried up because it is highly unlikely that auto loans will yield numbers at 20-21 per cent post of financing, similar to those that existed when the cost of financing was at 10-11 per cent”.

Wajid’s explanation for the increase in the cost of financing is only compounded by the SBP’s amendments to the prudential requirements on automotive loans, and the macro-economic situation that prospective buyers have had to confront in 2022.

Firstly, prospective buyers are in a worse position to purchase cars in 2022, particularly this summer, than possibly anytime over the past decade. Inflation has averaged over 20 per cent for the entirety of the summer. Automotive companies have compounded eroding customers’ purchasing power by introducing, at least three, upward price revisions since the start of 2022.

Furthermore, SBP through its increased administrative oversight of the import of completely-knocked-down (CKD) kits has created supply shortages that have led to automotive companies actively halting sale of their vehicles for differing periods over the past few months.

Secondly, in the case that customers persist with their purchase decision, despite rising prices, the SBP has taken deliberate measures to make automotive financing unappealing and costly for customers to stem Pakistan’s forex outflow.

Earlier this year, SBP amended the prudential requirements again to reduce tenors from five to three years for cars above 1000cc. This was on top of last year’s measures, which saw the SBP cap tenors to five years, increase the down payment from 15 per cent to 30 per cent, cap financing at Rs3 million, and disallow financing to be used for imported vehicles.

Cumulative decline in auto financing during 2022 is around Rs15 billion. Going forward, it is likely that these dips will increase unless either the SBP loosens its noose automotive financing or the macroeconomic situation drastically improves.

“The average auto loan has a life of 48 months. It’s an inverted curve so the principal repayments accelerate over time. The interest repayment is greater than the principal in the initial part of the loan but as the loan goes past 18-20 months then the principal portion decreases very rapidly” said Wajid.

Utilizing the 18-20 month timeline, the current debt servicing, notwithstanding customers terminating their debt obligations earlier, is at the earliest for loans taken out in January and February 2021. If new loans do not increase then these dips will likely increase as the principal for the Rs97 billion automotive loans will start being serviced in the months to come.