GCF needs to speed up its approval timelines, especially for vulnerable countries, however, not everything needs to be done by the Fund alone 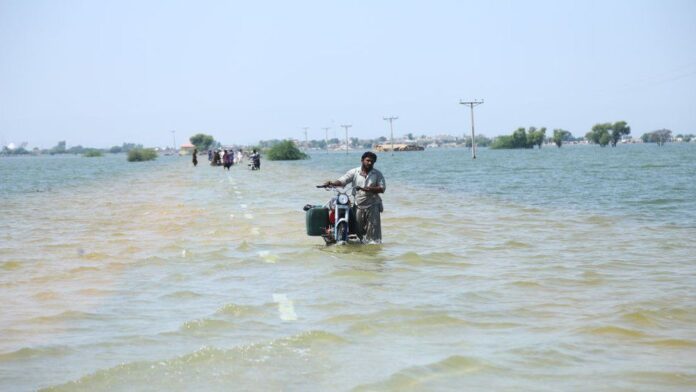 Pakistan is suffering from one of its worst natural calamities. In all the pain and agony, a viral video of a small boy provides hope against hope. His hair grubby, his clothes dirty; he takes out thirty rupees out of his pocket and deposits them in a relief camp for flood victims. His total earnings of the day: sixty rupees.

What Pakistanis have learned this monsoon is that the ravages of floods are severe and know no boundaries. All four provinces were affected – some more than the others. In parts of Balochistan, it rained incessantly; for more than seven days a week where it rarely rains for a day or a two usually, not only destroying crops and livestock but also shattering hope, optimism, and confidence.

The losses have been outrageous. We lost cotton crops spread over 1.4 million acres, rice standing on 0.6 million acres, and dates on 0.1 million acres. 7 per cent of our sugarcane, and 50 per cent each of sesame, tomato, chili, vegetables and onions have been destroyed, which will affect already rising inflation. Almost 900,000 livestock have perished so far, leaving small farm holders with no real assets.

Agriculture is not the only affected sector. In education, around 17,000 primary, secondary, and higher secondary schools for boys and girls have been destroyed. In addition, approximately 5,400 schools are being used as shelters for displaced people, preventing school going children from resuming education until all refugees are relocated.

The health sector is even worse. So far, more than 1,500 have died while 15,000 are injured. An estimated 6,400,000 people, including 3,000,000 children are vulnerable to outbreaks of cholera, typhoid, measles, leishmaniasis, and HIV; 52,000 people are suffering from diarrhea and around 650,000 pregnant women are stranded with no healthcare facilities. More than 1,000 health facilities have been damaged by floods, with 180 completely destroyed.

The global response has been muted thus far. However, the architects of climate finance remind us of the availability of funds from the Green Climate Fund (GCF), which can be accessed by the Least Developed Countries (LDCs) like Pakistan. The progress on this so far includes four funding project approvals for a total committed funding of $131 million since its inception. Actual disbursement figures are even lower, around 20 per cent, which is paltry as compared to GCF’s own climate ambitions and our climate vulnerability.

In an ideal scenario, the most vulnerable countries should receive more funding. Not with the GCF, however. The finance is competitive which means that countries with higher capacities can tap into the GCF space more than the others (such as China and India). On the contrary, countries susceptible to climate change are the ones that have weak governance systems, rely on inadequate and outmoded disaster preparedness levels and ill-equipped technical and financial capacities to work on long-gestation project proposals and execution. This means that vulnerable countries continue to lag, especially for mobilising investments for climate finance activities.

Let’s pick up a few statistics. In Pakistan’s case, the GCF has taken on average 538 days to process an application in the pipeline phase. This is roughly a year and a half per project.

Once the project is accepted, the GCF board’s approvals follow. In Pakistan’s case, the GCF took another 288 days on average to process approvals. Overall, this has meant that a total of 826 days were spent to get one project past the approval line. This does not factor in the work that a project proponent does on its own before submitting anything.

These numbers are not standalone for Pakistan. Almost all countries vulnerable to climate change see similar profiles of project approvals from the GCF. Bangladesh, for instance, has seen an average of 608 days per project in the pipeline phase and another 580 days in the approval phase; Sudan has numbers of 1,168 days and 190 days; Malawi 407 and 381 days, while one project in Myanmar usually takes 1,172 days to be processed and 159 days to get approved. The most vulnerable countries to climate change remain the most vulnerable countries to access climate finance also.

For this to change, two things must happen. First, the GCF needs to speed up its approval timelines, especially for vulnerable countries. Vulnerable countries just don’t have the time for an elaborate approval process, bureaucratic delays or to run back and forth for document screening and validations. In a typical government bureaucracy (which GCF is beginning to look like), this may well be a norm. This is suicidal for countries facing imminent climatic catastrophes.

One problem here is the over reliance of former and current bureaucrats in its hiring structure. All of the Fund’s senior positions represent government bureaucracy appointed by national governments as their representatives. There is nothing wrong with an appointment of a bureaucrat; however, they often come with a generalist training and are not the most suited decision makers when it comes to climate finance, transaction structuring and blended finance deal flows. To tackle the size and scale of climate finance, some sort of blitz-scaling is required. Some new iterations, trial and errors, speedier processes and faster timelines. Time for business as usual is receding fast.

Second, not everything needs to be done by the GCF alone. Vulnerable countries need to ramp up their climate actions as well. If one third of Pakistan’s is submerged then a response must come from within too. Today, more than ever, its ecological integrity is at the cross-roads with its territorial integrity. Any imbalance between the two will only worsen the situation from hereon.

What it needs to do to tap climate finance is more than obvious. Lead technical and financial capacity building through enhanced institutional capacities. Invest time and resources on quality feasibility studies, participate and advance its climate adaptation plan and start investing in critical infrastructure. Small steps will make a difference but the time to take those small steps is today.

That boy may have given the most he could that day. Now, it is time our leadership’s time to stand up for the cause.

The reduction in capital costs associated with solar energy and consequent drop in generation cost on a per kilowatt-hour (kWh) basis has primarily been...
Read more
COMMENT

The extreme fluctuations in prices of tomatoes amongst other staples over the last few weeks have induced a weird kind of panic. Yesterday the...
Read more