Tobacco is one of Pakistan’s most successful crop stories 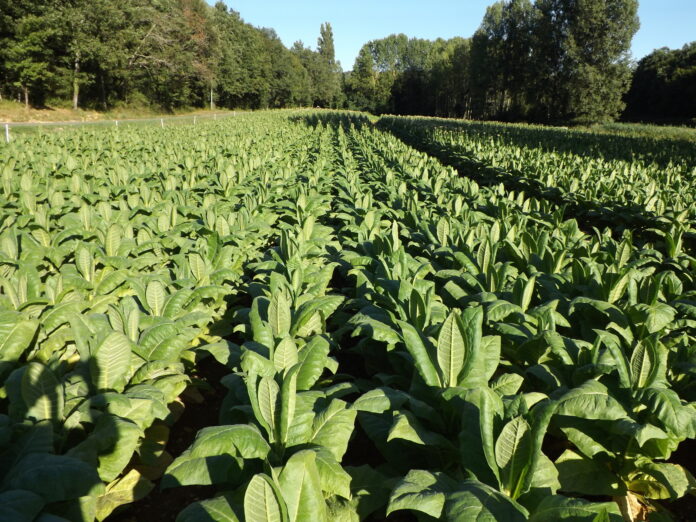 For many years a silent war has been raging in Pakistan’s tobacco industry. On the one side are the big-boys of nicotine, the two multinational cigarette manufacturers that control nearly 60% of the country’s tobacco consumption market share. And on the other are more than 50 smaller companies. All local, all willing to scrap, and all a constant thorn in the back of the multinationals.

There really are no two ways about the fact that cigarettes are bad for you. They are a filthy, deadly, dangerous, plague upon humanity that have killed more people in the 20th century alone than both world wars combined. Yet the industry that runs them is nearly as deadly as the product itself.

At the centre of this battle between evil and evil are vast swathes of fields in Khyber Pakhtunkhwa where tobacco is grown. Tobacco is grown in all four provinces in Pakistan, but it is predominantly grown in KP where it  is a major part of the local agrarian economy. KP’s provincial economy is pegged majorly to the growth of tobacco. More than 80% of KP’s population lives in rural areas, with agriculture accounting for around 30% of provincial GDP. Pakistan currently grows tobacco on some 50,800 hectares, with KP making up nearly 30,000 of these hectares.

The reason is that tobacco has received a lot of attention in Pakistan. The Pakistan Tobacco Board  (PTB) promotes the interests of tobacco and also acts as a research arm. In addition to that, the existence of multinational players means that the tobacco crop receives great infrastructural and institutional support that other crops lack. One of the largest problems of agriculture in Pakistan is poor research which leads to bad quality produce, dated farming techniques, and non-resistant seeds. The tobacco crop does not just have serious backing but an entire lobby that has taken Pakistan from being a country that produced no tobacco at all in 1947, to becoming self-sustinent in 1968, and now one the the largest tobacco producers in the world, with some of the highest per-hectare yield.

All of this means that Pakistani tobacco has great potential to be  a major exportable crop, especially since the demand for tobacco from South Asia has grown over the past few years. Even though Pakistan has some of the highest yield and is one of the overall largest producers of tobacco, it is low down on the list of countries that have the most area under cultivation for tobacco.  Of course, for  the tobacco crop to be utilised correctly there needs to be serious introspection over two things: the dynamics of Pakistan’s tobacco industry and the issue of taxation.

It is surprisingly unassuming. The tobacco plant is a great, big, leafy beast that can grow to surprising heights. From afar, it may even look like some kind of mutated crop of lettuce. After harvesting, however, it is taken to dry, crushed, and turned into the grainy brown substance that is rolled into cigarettes, lit, and smoked by millions of people everyday giving them a buzz in the short-run and chronic health problems in the long-run.

Tobacco’s trajectory in Pakistan has been quite impressive. In 1947, it was not grown anywhere in Pakistan. From 1948 onwards some efforts were made to try and grow the crop, beginning with an experimental 20 acre farm. It was very quickly discovered that KP’s land and climate was ideal for growing tobacco, and by 1968 Pakistan was no longer a net-importer of tobacco. However, at this point the quality of tobacco being grown was not good enough for production by major companies and was used mostly by smaller local cigarette companies.

In 1968, the Pakistani government took serious steps to support, improve, and develop the country’s tobacco industry by establishing the Pakistan Tobacco Board (Ali et al. 2015). The formation of the Pakistan Tobacco Board (PTB) was the first step towards promoting and developing tobacco production and export. Since the establishment of the PTB, the board has been protecting the rights of tobacco growers, buyers, manufacturers of tobacco products, and traders engaged in tobacco processing. The effects were far reaching. 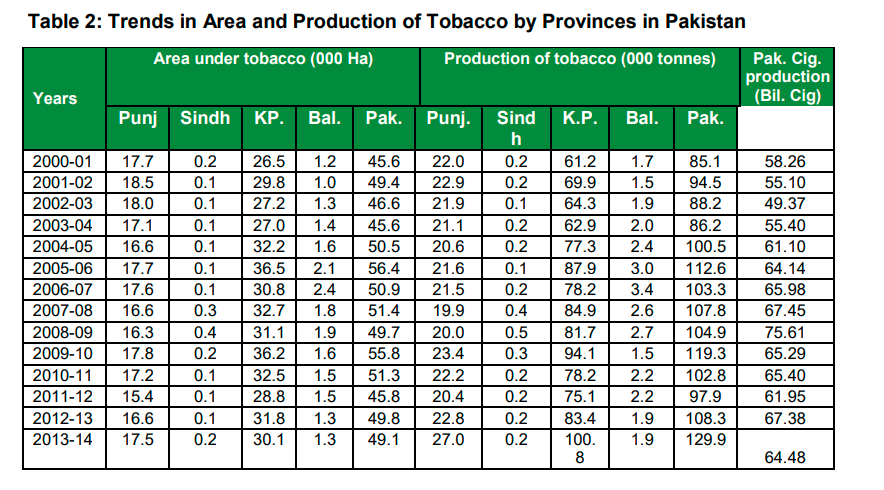 So what are the issues?

Despite this, the area under yield has not increased. This is largely because existing farms have been the darlings of tobacco companies and have profited from this relationship. New farms have not been set up, however, because the farm-profitability of tobacco is not as high as it should be given the yield numbers. This is because when farmers produce tobacco, they do not process the leaves into the substance that is rolled into cigarettes themselves. Tobacco companies buy green leaves from the farmers and then process them into smokeable tobacco. These green leaves are purchased at a very low rate, and on top of that tobacco farming requires a lot of expensive inputs such as fertilisers, labour, mechanical power, pesticides etc which discourages existing farms from expanding and new farmers from planting the crop.

The earlier mentioned study actually concluded in its assessment of whether or not tobacco farming is profitable that “tobacco production is not very lucrative at the farm level,” and that a price increase for green tobacco leaves would significantly increase the demand for farm inputs such as fertilisers, labour, mechanical power, pesticides, and farmyard manure. Tobacco production is negatively affected by the increasing input prices in the study area.” On top of this, there has been a regular demand among the tobacco farmers in KP to give tobacco ‘crop status’ which would protect it in many ways, and also give it a greater share of cess from the federal capital.

The tobacco market in Pakistan

This is where things get more interesting. There is definitely a case to be made for more areas being used for tobacco cultivation. However, the problem will not be fixed until the farming of tobacco leaves becomes profitable. One of the biggest impediments to this is how the tobacco industry in Pakistan works. There are two MNCs that operate in Pakistan. One is the Pakistan Tobacco Company Limited (PAKL), which is the Pakistani subsidiary of British American Tobacco. The other company is Philip Morris Pakistan Ltd (PMPK).

This means that there is stringent competition between the two sides. So much so that the MNCs actually lobby for higher taxes that are more stringently imposed on the local growers and manufacturers. They believe that because they pay so much more tax while local producers do not, they have an unfair advantage that allows them to control 40% of the market share. 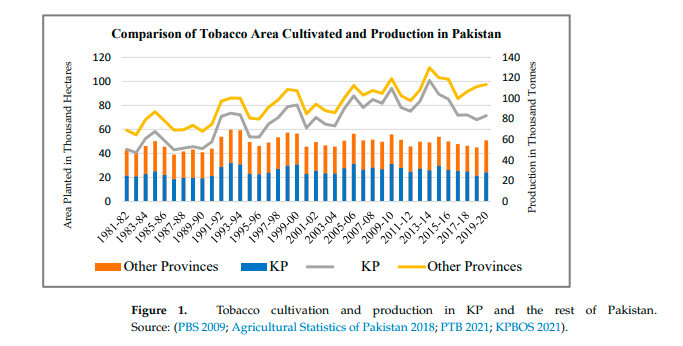 Let us not be under any illusions here. Large tobacco companies are not making these demands out of any sense of duty or goodwill. No, they want more people to smoke more cigarettes and given the chance, they would splurge on advertising, marketing, and packaging the product.

Local tobacco growers sell their crops to local manufacturers, who then produce cheaper cigarettes of their own. Since they operate on a much smaller scale, they often fly under the radar and manage to market their products as well as not pay high taxes. This is why regularly the tobacco industry tries its best to make sure that these local manufacturers have to pay their taxes, and cannot market their products since that ends up stealing a sizable chunk of the market from. This leads to a situation where farmers end up facing the brunt of the competition when tobacco companies vie for lower rates and prices for green leaves.

However, the MNCs have the advantage of being able to lobby extensively against smaller competitors. Speaking to Profit, Ikram Ghani, the former Pakistan Tobacco Board (PTB) chairman said that these are another typical projection of the viewpoint of the two MNCs especially PAKL. “They love to play the bogey of the local companies which actually are their main competitors in tobacco purchase,” he says.

The former PTB chairman maintains that the multinational companies should name the 52 local companies, since according to him there are about eight or nine units operating in Khyber Pakhtunkhwa (KP). “And how has this 40% market share been determined? What is the share of smuggled cigarettes, counterfeit cigarettes produced in FATA,  cigarettes produced in AJK where most of the local industry has shifted,” he asks.

There is another aspect to this: health. Cigarettes are bad for you, no matter how cool they look. In an op-ed for Dawn, for SAPM on Health Dr Zaffar Mirza claimed that the time was ripe for a heavy tax to be slapped on consumer items that have proved to be harmful such as tobacco products and sugary drinks.

“Such a measure would be good for public health and will support the ailing economy. Smoking is on the rise, and a cash-strapped Pakistan desperately needs revenue. The IMF supports such taxes and tobacco excises in Pakistan are way below the recommended global level. Tobacco is lethal. Of the eight million deaths that occur globally each year due to tobacco use, 170,000 are in Pakistan — to put it into perspective, the total deaths from Covid-19 in Pakistan were around 31,000,” he wrote.

The reality that tobacco is a harmful substance that we should long have been rid of is very real. However, tobacco is here to stay for now. If we are to take any good from it we must encourage more growth that benefits farmers and is largely export oriented. Because there really is very little other benefit from its cultivation.