As MG touts potential new releases, its most popular offering might have taken a back seat till 2023 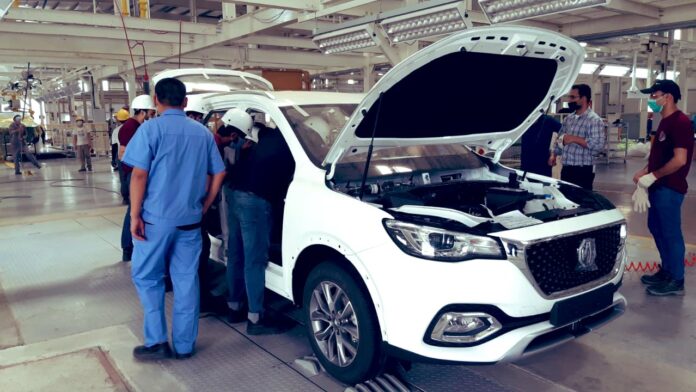 LAHORE: MG Motors’ CEO Javed Afridi caused a storm on social media with a prehype of MG4 Fully Electric that he claimed could travel from Lahore to Peshawar on a single charge. Despite the big announcement, MG has yet to fulfil an older promise it made: Releasing completely knocked-down (CKD) versions of the MG HS by the end of 2022, but with just a month left in year end the launch is nowhere in sight.

As new projects are coming in, what does it mean for the old ones? Is local production for MG cars in the pipeline or just a pipe dream?

MG is yet to introduce any CKD models in their roster. As the term implies, it means that the car will be completely manufactured and assembled in the local plant. This qualifies CKD cars models for government benefits and exemption from excise duties. As a result, the price of a CKD car is cheaper than a completely built-up (CBU) car which is essentially imported in the country as whole vehicles.

Ever since MG began local assembly March at their Lahore plant, predictions about MG HS have been making rounds. However, a conflict with the Engineering Development Board (EBD) regarding their paint plants non-compliance with greenfield plant investment regulations had become the main source of delay per Pakwheels CEO, Suneel Munj. The conflict had disabled them from obtaining the licence to sell locally assembled automobiles in Pakistan.

There has been no update regarding the conflict being resolved from either the EDB or MG as of yet.The latter is particularly important as not sharing any development on social media would be very uncharacteristic of MG, given their social media outreach and approach across all the platforms they utilise.

The  update in the HS’ timeline came in June 2022 when Afridi, in a social media post, stated that MG may begin domestic production as early as July. The statement came on the back of the  MG HS completing its all-terrain testing the same month. However, even then speculation was rampant that MG would not meet the July deadline.

Pakwheels had estimated the issue to reach a conclusion in October, only after which MG will introduce their local portfolio in the market. However, it is now December and there is no update regarding when the CKD HS will be available to customers. Profit reached out to Syed Asif Ahmed, General Manager of Sales and Marketing at MG Motors, regarding the matter. However, we were unable to receive any response regarding the matter.

On a visit to MG dealership, Profit learned from the staff that booking for the HS would tentatively begin in January 2023 with delivery being promised by March. The retail price is expected to be Rs 6,641,000. Currently, however, CBU HS is available for Rs 7,700,000 inclusive of on-payments. The units available are either leftover units the company has given the dealerships or units owned by investors looking to dispose of them. The latter was made very evident as the dealership team explicitly stated that they were willing to negotiate the price downwards if customers did express their desire to purchase the vehicle.

- Advertisement -
Facebook
Twitter
Linkedin
WhatsApp
Email
Previous article
Why did the US fall behind China in cellphone production?
Next article
Pakistan says Russia agreed to sell it discounted oil. Now what?