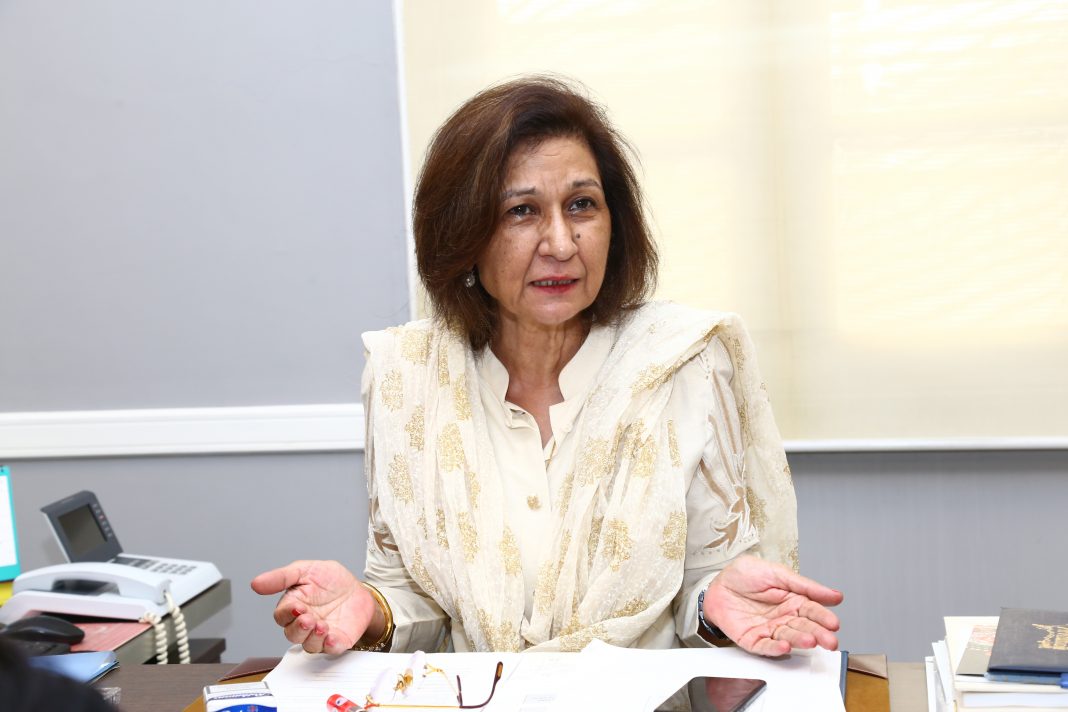 As you pass through quality check at the Nishat Linen factory there is little that can prepare one for the gush of creativity that lies down two flights of stairs. Buzzing with energy that comes naturally to a place where a fleet of designers are enthusiastically consumed in work, a vast hall welcomes you to the behind-the-scenes of the fashion apparel industry.

All the usual suspects imagined to be part of such a scheme, from fashion magazines, sketch pencils, stencils to a variety of fabric – velvet, silk, chiffon and cotton, are seen clumsily lying around. The twinkling of beaded fabric hanging from nearby shelves adds to the magnificence of the environment. Crossing one hall into another, we finally found ourselves standing outside the door of the woman behind the brand that calls itself the ‘fabric of Pakistan’.

Soon we were seated across Naz Mansha – owner and CEO of Nishat Linen, in a bid to quench our inquisitiveness about the brand and the industry at large. “I don’t want to boast. But our product is superior to every other brand,” she states in a matter-of-fact tone.

An independent entity under the umbrella of Nishat Mills, Nishat Linen was set up in 1989 as a home furnishing brand producing bed sheets for export purposes. It was not until 1992 that the brand diversified into an apparel brand, also opening a showroom for sales in Pakistan. Almost three decades down the road, Nishat Linen has more than 100 outlets across the country and has managed to penetrate the Middle Eastern and the North American markets.

Despite continued rise in competition, NL has been able to not only survive the challenges in the market but has managed to carve out an identity for itself. This, Naz Mansha attributes to higher quality of their brand. And with new brands hitting the market every now and then, that is a heavy claim to standby. The confidence comes with NL acquiring raw material – textiles, from Nishat Mills. “This way we have the assurance that our product is of best quality from start to end”.

While NL buys cloth from Nishat Mills at market price, Mansha explains the brand is not entitled to any monetary favors.  “We are like any other customer to the mills and we do not get any discounts because that business has to prove its profitability as well. So they do not give us any favors” says the CEO of NL. With every member of the family, including her sons and daughter-in-laws heading a different project, while the group is a family business, she believes the only benefit they reap from the situation is in the decision making process. “It makes things easier because while everyone knows a lot about their own business, they have an idea about others’ too. So business discussion is healthy and beneficial every time it takes place but does not provide any monetary advantage”, she clarifies.

A factor that Mansha views as an extra edge that NL enjoys over its competitors is the buying choice given to customers. “All other brands only sell complete suits. They do not let customers pick and choose,” says Mansha. With customers also wanting to buy different cloth-length based on what they want to do with the fabric NL offers that convenience. “Gone are the days of the traditional shalwar kameez dupatta. Now many girls just want to buy a kurta which they can wear with a pair of jeans.”

But that convenience means more leftover fabric. Does that equate to wastage for the brand?

At the end of every season, clothing brands come up with sales to clear that season’s stock. For NL it is those leftovers that make it to their sale offers. “Our sales do not have low quality stock or anything less than our usual products. The products that are leftover are then displayed during discounted sale offers.” However, the businesswoman shares that she is not a big fan of sales, and perhaps no brand is. Mansha explains that with sales only being possible after giving up on the premium, prices have to be lowered to increase sales.  For brands it means more revenues but with lesser profits, she adds. “It might appear that discount offers bring in more customers. But regular sales are always more than discount sales,” she explains. For Nishat Linen, approximately 70% of its total revenues come from its regular-priced sales. And according to the CEO of NL the trend is same for other brands in the market.

With new brands springing up so often, the market has become competitive. Mansha believes only the fittest can survive. “Focus on quality from start to end – that is the only factor that can allow a brand to survive in such high competition”. With names like Khaadi, Sapphire, as well as some of the other established brands including Alkaram and Gul Ahmed, performing well in the market Mansha says brands need to be kept on their toes to bring out their best products.

Despite such apparent competitiveness, NL seems to be enjoying its position as one of the market leaders. It operates in more than 50 cities and has manufacturing units in five. As for revenues, Karachi and Lahore seem to be the biggest contributors with approximately 30 per cent of sales coming from each city. Islamabad and Hyderabad are other metropolitan cities that list high for NL sales. And to top it off their outlets are not restricted to large cities. Outlets in Lalamusa, Bhurewala, Rahim Yar Khan, Jhelum and many other smaller cities are notable in terms of revenues, busting the popular assumption to the contrary.

Nishat Linen is also operating overseas in the Middle East and America. Around 30% of its total revenues are generated from exports. Naz Mansha says with the brand having a global exposure it also has to follow a calendar that marks global festivals in line with traditions of countries their outlets are in. So while there are occasions of Eid and the Independence Day – August 14 in Pakistan, there is Diwali, Nauroz and July 4 for its outlets in foreign countries.

With television and social media being used for advertising, Mansha believes brand outreach has become easier even in smaller cities. “Women buy our products. They see it on TV or social media or the younger generation talk about the new collection with their mothers…and it all leads to actual buying.” But while social media has become a major tool in modern advertisements she says conventional means still maintain their place. “Some people still need to see the billboards and magazines. Many people are using social media but a majority is still not tech savvy. So we have to use a mix of old and new means to properly communicate our brand and products.” A testament of which is a large billboard prominently displayed at the Cavalry ground intersection advertising the brand’s latest collection.

As for pricing their products Mansha says the company has around 80 per cent margin on the cost price of the products to arrive at sale price and that is done in consideration of the overheads – and that list is long. “Electricity and salaries cost a lot,” she says while recording social security and old age benefits for their employees as other strains on their expense.

Nishat Mills has its own power generation system which NL also gets to use. But that Mansha clarifies is only for backup and not the primary power source. “Those systems are not designed to run continuously,” she adds while explaining that the brand has to rely on the main power supply. “And at times when those systems work as generators, we need diesel or gas to run them. That, too, is among our major expenditures.”

Overheads and especially taxes, she says, have a major pressure on the company’s costs. “We pay taxes on every single thing. It doesn’t drain us, but it is a huge expense nevertheless,” she adds. Claiming that many other known brands, which she consciously does not name, are evading taxes Mansha expresses frustration over the lack of accountability – something that she feels is downright unfair. “This is not only limited to clothing brands…almost all businesses have some names that are taking home the margins which are actually going out of the pockets of tax-paying businesses.”

A strong advocate of paying taxes NL’s chief says they simply do not do business with anyone who is not tax registered. “Even the sellers of beads have to have a tax registration number to work with us. We are paying money but if there is no record of where it is going then that is a problem for us.” She stressed that NL and even the entire Nishat Mills group has to make sure that they do not do anything which blemishes their reputation. “This is something that my husband (Mian Muhammad Mansha) has ingrained in all of us – not to run overboard, not to do anything which is not transparent.”

In the larger scheme of things, she believes the industry needs to be incentivized more by the government. “Pakistan is not producing many value-added goods and the reason is not the absence of potential but the absence of opportunity,” she explains. With the government playing no role in the retail industry, causing Pakistan to lose out on its potential, Mansha also cites the example of Bangladesh where its government has signed agreements with the US which both prefers and promotes Bangladeshi products. “I am not saying that the government should hand it over free to the industry. But a special tariff or some concession on the expenditure side would motivate entrepreneurs to further invest and produce value-added goods.”

And for all the challenges that Nishat Linen has had to face over the years there is a deep sense of loyalty to the brand she so lovingly nurtured. “If someone gifts me a dress from another brand, I happily accept and even wear it too,” she says light-heartedly “but on my own I am loyal to my own brand.”

As for the future, Mansha believes the brand will grow as opportunities arise much like the journey that began from a single workshop that produced bed linen to now, having expanded into an international apparel chain. “That happened with time. Same trajectory is on the cards for the future and we will grow Nishat Linen as the possibilities arise.”