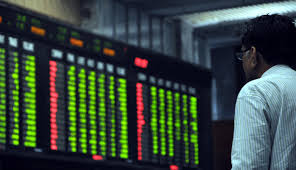 After the much anticipated Panama Case verdict was announced on Thursday, the market jumped 1140 points to breach again 48,743 level, but KSE-100 index surged to an intraday high of 49,509 points with 1905 points or 3.85 per cent in a single trading day.

“In points terms, 1905 points is the largest ever single day upside move,” said Adnan Sami Sheikh, equity analyst at Topline brokerage house. Once the initial euphoria settled, some participants opted to book profits, resulting in the market receding from its highs to close at 48,744pts (+1,140pts/+2.4%), he added.

In the decision, the Supreme Court (SC) of Pakistan further ordered to hold an investigation against Prime Minister Nawaz Sharif, his daughter Marium Nawaz, sons Hussain Nawaz and Hassan Nawaz through a Joint Investigation Team (JIT) comprising of Federal Investigation Authority (FIA), National Accountability Bureau (NAB), Military Intelligence (MI), Inter-Services Intelligence (ISI) and SECP etc. The JIT has been given a time frame of 60 days to complete its investigation.

After this decision, the market participation witnessed increased activity with volumes surging 54 per cent d/d to 408 million shares, while traded valued exploded by 68 per cent to Rs 25.7 billion /$245 million.

The market opened at 47,636 points on Thursday, after the previous day’s highest intraday swing, 3.56 percent, since November 2016, when Imran Khan called off PTI’s sit-in and the market swung by 3.76 per cent. The trading remained volatile during the initial session on Wednesday when the investors remained sceptical over the most awaited Panama result. However, the panic was waived off by the end of the day and market closed with 1.6 per cent up.

Shortly after the post-result hype settled down, the market retracted back to 48,743 points or +1140 or 2.57 per cent at the closing time but the analysts saw the acceleration as a positive trend that will prevail in the market in the coming days.

Yaseen Lakhani, former chairman and currently director of PSX said, “finally the decision of Panama Case has been announced by the SC and now all the political parties should respect and accept it.” “Because of this case, there was an uncertainty in the market, but now this negative trend will end and investments’ doors will open,” Mr Lakhani added.

Mohammad Sohail, CEO of Topline Brokerage house said, “After this decision, there is being hoped that political stability would move forward in the country and if there would be political stability, the market will perform well as it does today.”

“The decision of the Supreme Court is good for the PSX’s investors, which ends the unrest among the investors,” he added.

“The uncertainty is over and I see the market breaching the 50,000 level again, the [investors’] focus is back on the market who were previously distracted by the political scenarios,” said Adnan Sami Sheikh, an analyst.

Topline Securities had earlier predicted a similar scenario regarding the Panama Case result and its outcome on the market in its analyst report of March 15, 2017, which stated that a JIT is likely to be formed and the market will accelerate up to 1000-2000 points.

Sequentially, Zeeshan Afzal ‎Executive Director Research at Insight Securities said, “Most of the investors expected a positive result and we saw the anticipated excitement too; not for Nawaz Sharif mainly but because the democratic system and current policies have sustained which investors were mainly concerned about.”

He further added, “I see the market breaching 50,000 and settling around that over next few sessions, given that the uncertainty regarding the budget, economy numbers and MSCI inflows are settled.”

Sheikh, on the outlook of coming trading sessions, said, “I assume that the PM will now announce more popular projects before the 2018 election i.e. highways, roads etc. will be constructed more and as that will happen, there will be increased spending activity and that is good for the local market and the local companies.”

A report of the AKD Securities said, “The SC, while forming a Joint Investigation Team (JIT), stayed short of disqualifying the prime minister in the eagerly awaited Panamagate decision today, allowing the PM to continue holding office.”

The JIT, to be comprised of one senior official each from the FIA, NAB, SECP, SBP, ISI and MI, has been tasked to investigate offshore assets including money transfers to Qatar of the PM and his family.

In this regard, the SC also ordered Nawaz Sharif and his sons; Hasan and Hussein to appear before the JIT, the report said.

The efficacy of the agencies represented in the JIT to conduct an independent investigation against a sitting PM is going to be challenging, the report said as some of these agencies have reportedly expressed an inability to conduct an inquiry citing various reasons such as immunity of public office holders, lack of evidence, legal jurisdiction, etc.

The market has been in a consolidation mode (down by 3 per cent) since the verdict was reserved on February 23, 2017.

With political uncertainty relatively lower than before, the analyst said that we expect the market sentiments to improve with the focus now being upon the upcoming MSCI EM inclusion and Budget 2017-18.