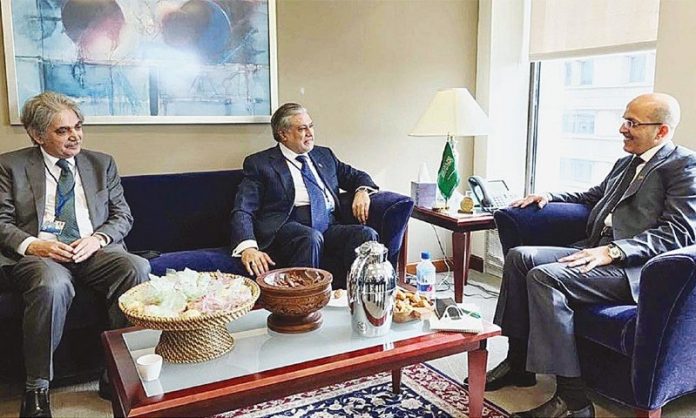 Finance Minister Ishaq Dar has urged the World Bank to finance the Peshawar-Kabul highway. The project will not link Peshawar with the Afghan capital but would also enhance intra-regional trade between the South and Central Asian regions.

The project along with other project proposals was presented to World Bank officials in Washington last week on the sidelines of the group’s spring meetings.

During the talks with the World Bank officials, Dar underlined the structural changes the government had introduced to promote sustainable economic development in the country. He highlighted that these changes had helped the country’s stock market to become one of the top five stock markets in the world.

Dar also informed the officials about the government’s efforts to encourage private sector participation in the China-Pakistan Economic Corridor (CPEC) initiative, giving it an opportunity to select the projects of its choice.

So far, projects worth $34b have been initiated in the energy sector. Projects for around 25,000MW have been identified and are at different stages of implementation. Out of this, 10,000MW will be added to the system by March 2018, Dar informed. Dar stated that as a result of these initiatives, load shedding has been eliminated from the industrial sector for three years and also informed that the government aims to eliminate load shedding from the country by early 2018.

Moreover, the government’s master plan for the energy sector which is claimed to give the economy the much-needed jump-start by taking care of the future demands was also the highlight of the meeting.

Dar further added that the government is focusing on inclusive and sustainable economic growth. In this regard, the government is reaching out to the poorer segments of society by extending microfinance facilities to them, he revealed. The allocation for the Benazir Income Support Programme had tripled with a target to reach as many as 5.4 million beneficiaries, he added.

As many as 24 laws to encourage growth and investment had been passed by the parliament and work on 10 more is underway, Dar informed the World Bank officials.

However, the bank has warned that the upcoming national elections may force the government to opt for populist policies, which could hurt Pakistan’s economy. The World Bank also identified various risks that could slow down the projected economic pace such as slower progress on the structural reforms, the prevailing uncertainty of the US economic policy, a strong rupee and protracted global economic weakness.

The World Bank also highlighted that Pakistan may also be affected due to a significant decline in remittance flows, especially from oil-rich countries which constitute about two-thirds of all remittances. The bank advised the government to take measures to counter the imbalances and continue with the implementation of structural reforms to ensure sustainable growth.

Dar also met his Afghan counterpart Eklil Ahmed Hakimi in Washington, where the two exchanged views regarding policies focusing on improving bilateral trade and economic ties between the two countries. According to an official statement issued after the meeting, the two officials are reported to have conceded to holding the next meeting of the Pakistan-Afghanistan Joint Economic Commission as soon as possible.