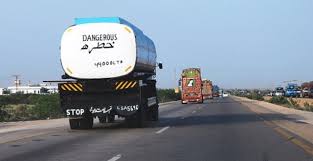 Karachi: The All Pakistan Oil Tankers Association (APOTA) has called off its plan to hold a strike which was due to start from August 21st Monday.

In a meeting held between Sindh Governor Muhammad Zubair and APOTA members, it was decided that the strike will be called off.

APOTA members shared the list of complaints with the Sindh Governor in regard to National Highway Authority (NHA), Oil and Gas Regulatory Authority (OGRA) and Pakistan State Oil (PSO).

As per Sindh Governor, all pending complaints and issues need to be resolved by dialogue and calling for a strike could strike panic and damage the national economy.

PM’s Economic Advisor Miftha Ismail was directed by the Sindh Governor to look into these issues and settle on a priority basis.

Ismail has invited APOTA and Oil Tanker Contractor Association for talks on Tuesday.

Last week, it had been reported that APOTA Chairman Yousaf Shiwani said talks between them, National Highway Authority and the Oil and Gas Regulatory Authority (OGRA) had failed. He requested the Prime Minister Shahid Khaqan Abbasi to intervene in order to resolve this deadlock.

He added that APOTA had reached to an agreement with the NHA and OGRA to hold talks and address the concerns of the oil tanker operators, but the relevant authorities had shown a cold shoulder in this regard.

Shiwani said NHA had been unwilling to provide any sort of relief and expected the operators to upgrade their fleet overnight, which wasn’t possible and the authority’s negligence to this critical issue was forcing them to consider going on strike again.

OGRA had received the brunt of criticism from Shiwani, who stated that the government is interested in upgradation of tankers in one go, which wasn’t a practical solution and only a few companies possessed the capability of bolstering their tankers and build 350 to 400 a month.