Market gains 0.99 per cent in November, to close the week flat 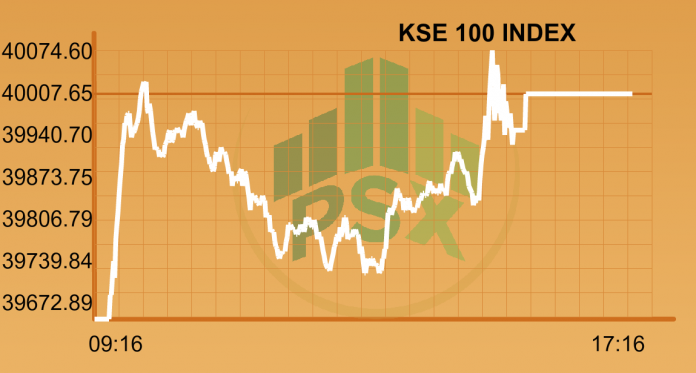 The last trading session of the month saw the Pakistan Stock Exchange (PSX) post a close in the green territory. The month of November has not been a good one for trading as the benchmark KSE 100 index closed up only 0.99 per cent. Volumes have been absent as political temperatures kept rising and economic indicators remained weak.

Foreigners sold $ 39.5 million during the week compared to selling of $ 6.3 million last week. On the local front, individuals and insurance sector were net buyers of $ 8.6 million and $ 8.5 million, respectively. Selling was concentrated in Fertiliser ($ 29.5 million) and Banks ($ 5.5 million) whereas buying was seen in OMC sector to the tune of $ 2.4 million.

The market volumes surged from 114.91 million to 180.78 million as compared to Wednesday. TRG Pakistan Limited (TRG +2.54 per cent) led the volume ladder with 23.34 million shares traded, Engro Corporation Limited (ENGRO +0.31 per cent) followed as 22.76 million shares of the script were exchanged.

Century Papers and Board Mills Limited (CEPB +4.99 per cent) announced the signing of an agreement worth Rs 13 billion with South Korea’s Pasco Daewoo Corporation (PDC), with an eye on future expansion.

Treet Corporation Limited (TREET +4.79 per cent) informed all stakeholders via a notice to the exchange regarding its Battery Project. The project has started trial production and commercial production is expected soon.

The new owners of the exchange are in the process of getting approval from their regulatory approval to launch a fund that will invest in the top 30 listed companies in the KSE-30 Index and units of the funds would be traded like stocks at a Chinese exchange.

The exchange shall remain closed tomorrow on account of Eid Milad-un-Nabi. Normal trading shall resume on Monday, December 4.