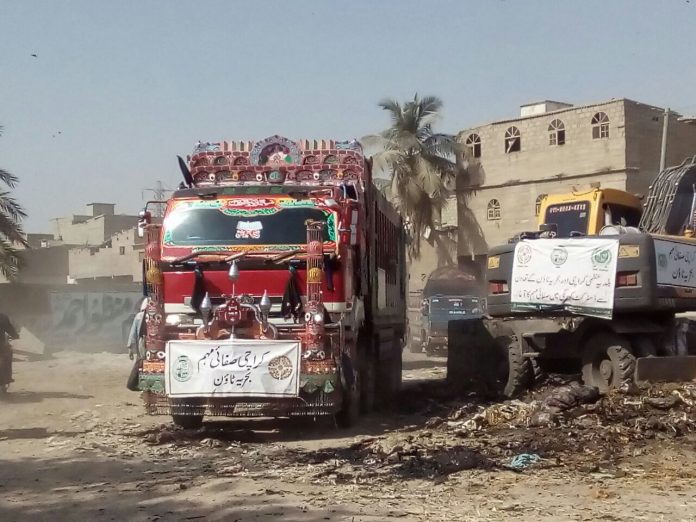 Bahria Town team has lifted more than 35,000 tons of garbage, in a short span of just 15 days. Upon witnessing the quality of work and the outcome, the campaign is gaining popularity among the masses with every passing day.

Currently, the cleaning work is going on in the area of Bilal Town of Korangi-2.5 where tons of garbage is being removed from an Eid ground. Bahria Town team is also working extensively to clean and revive healthy playing activities in a school’s playground, located in Bilal Colony, which was buried under thousands of tons of garbage for many years.

Karachi Metropolitan Corporation (KMC) Chairman Nayyar Raza also visited the area and appreciated the effort and thanked Bahria Town and its team for their wonderful performance over the last fortnight. He also called the drive an inspiration for every local government in Pakistan and admired the quality and speed of Bahria Town.

Bahria Town Karachi has dedicated a team of thousands of personnel and heavy machinery including dumpers, loaders, excavators, tractors and trolleys. An organised plan has been laid out by dividing the district into four zones which are Model Zone, Shah Faisal Zone, Korangi Zone and Landhi Zone.

In order to uplift the diminishing living environment, Bahria Town Chairman Malik Riaz Hussain has also pledged Rs 10 billion for cleaning and face-lifting of the business capital of Pakistan. In addition, Malik Riaz Hussain offered assistance to the city government for providing financial and technical support for any hospital and school in the city.

Bahria Town Karachi, the largest and the most advanced private real estate community, is not only redefining lifestyle preferences but also setting new standards of green and clean environment by introducing international standards of road cleaning, waste management and disposal systems.