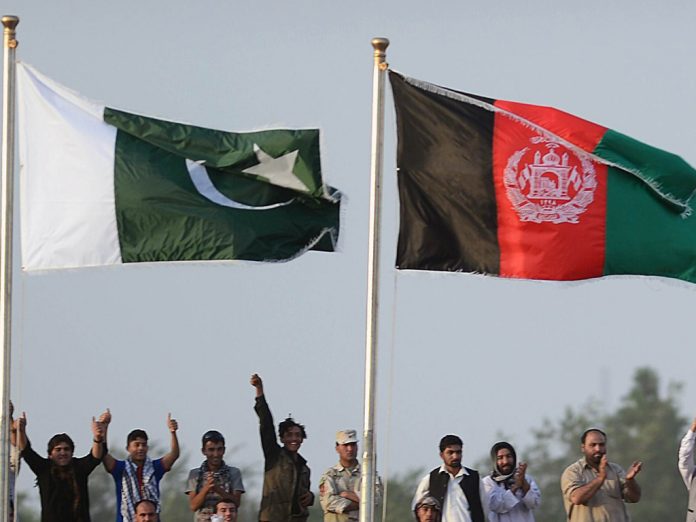 ISLAMABAD: Owing to the fast-deteriorating relations between Pakistan and Afghanistan, bilateral trade between the two countries has witnessed a drastic decline from $ 2.7 billion to $ 1.2 billion only in one-and-half-year.

Therefore, keeping in view the drastic downslide in bilateral trade, Pakistani and Afghan businessmen and traders have stressed their respective governments to separate trade from politics so that trade would not be affected by the uncertain political ties.

Speaking at the “Cross-border Roundtable” organised by the Pakistan, Afghanistan Joint Chamber of Commerce Industry (PAJCCI) in collaboration with Centre for Research and Security Studies (CRSS) and Safe World, a UK-based independent international organisation here on Saturday, representatives of the PAJCCI said that due to uncertain political ties between the two neighboring countries, the economic and social ties have been badly hurt as it is evident by the continued nosedive trend in bilateral trade mainly caused by the fast-growing trust deficit.

Hence, they suggested that traders of both the countries should be allowed to do their business uninterruptedly and it should not be influenced by political and security tensions.

The participants stressed the need for taking much-needed confidence-building measures so as to restore the confidence that could pave the way for initiating political dialogue between the two countries.

Speaking on the occasion, Afghan Chambers of Commerce President Khan Jan Alkozai categorically stated that no one could deny the strategic importance of Pakistan; hence no other country including India could replace Pakistan because of its strategic location and historical brotherly relation with Afghanistan.

He said that the trade and economic ties have been badly impacted due to the prevailing tension between Pakistan and Afghanistan; hence he suggested that the governments should formulate policies that would not negatively affect bilateral trade.

“Since Afghanistan has been facilitating Pakistan trade with Central Asian states, we also want similar cooperation from Pakistani side to facilitate Afghan traders,” he maintained.

Pakistan Afghanistan Joint Chamber of Commerce and Industry Chairman Muhammad Zubair Motiwala said that though both countries had decided in 2014 to raise the bilateral trade to $ 5 billion in five years, however, the rising tensions between the two countries and the subsequent problems such as restrictions on traders and border closure had drastically decreased the bilateral trade from $ 2.7 billion and $ 1.2 billion in only one-and-half year.

Motiwala expressed optimism that the meetings of APTTCA and Joint Economic Commission be held after the meetings of Pak-Afghan traders scheduled for coming weeks in Kabul and Islamabad.

“Afghan Ambassador to Pakistan Omar Zakhilwal held a series of meetings with Pakistan concerned authorities regarding removing hurdles in economic activities,” he added.

He said that both governments need to sign preferential trade agreement to increase the volume of bilateral trade, as traders of both the countries could play a role to bridge the gaps between both the governments.

PAJCCI Senior Vice President Zia-ul-Haq Sarhadi said that Afghan traders were doing their trade through Chahbahar port due to an uncertain situation and constant hurdles in bilateral trade.

Stressing the need for implementation of the transit trade agreement, he said traders in Khyber Pakhtunkhwa have been badly affected due to the problems in the Pak-Afghan trade.

They stressed the need for convening the meeting of Afghanistan-Pakistan Transit Trade Coordination Authority (APTTCA) to facilitate the process of joint discussions to revive the economic transition between the two countries.

They were of the view that the restoration of the economic ties could help restore confidence and even help lead to peace and prosperity in the region in general.