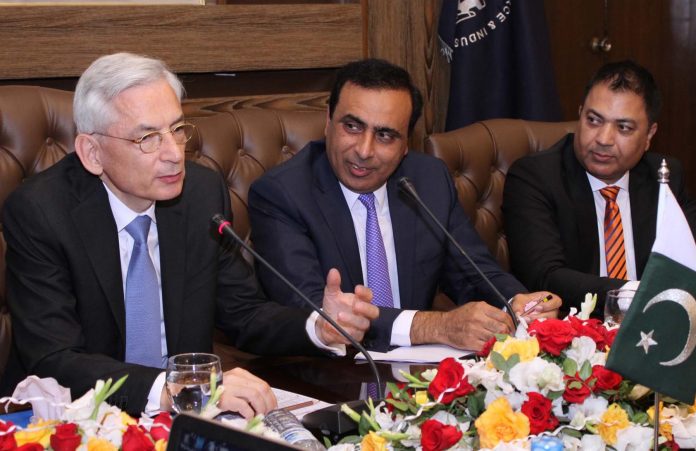 SIALKOT: Ambassador of France to Pakistan, Marc Barety and Head of the Economic Department Phillipe Fouet visited the Sialkot Chamber of Commerce & Industry (SCCI) and discussed issues of mutual interests pertaining to enhancing bilateral trade between France and Pakistan.

Zahid Latif Malik lauded the efforts to enhance bilateral trade and investment and said that the same could be conveniently enhanced by facilitating frequent interactions of private sectors through single country exhibitions, exchange of trade delegations and one-to-one meetings of businessmen from both sides. He emphasised that Sialkot exporters have great potential to explore and capture the international trade markets including France by exporting their world class traditional and non-traditional export products.

Ambassador France to Pakistan thanked the people of Sialkot for their warm hospitality and appreciated the exceptional projects of the Sialkot business community including Sialkot International Airport and AIRSIAL.

Marc Barety stressed on the need of making mutual efforts to further boost the bilateral trade ties between Pakistan and France. He invited exporters to diversify their product line mentioning that most innovative goods are produced in Sialkot.

He said that exporters in Sialkot were well versed with international standards and could exploit the opportunities in the European Union through France. He also highlighted the potential of collaboration in the agricultural sector, considering the innovations of France in high tech agro.

The French ambassador said that France was keen to boost mutual trade ties with Pakistan by facilitating joint ventures and identifying potential areas of collaboration. He praised the law and order situation of the country and said that Pakistan was a safe country. The French envoy further expressed his commitment to work with the Pakistani government to project a positive and correct image of Pakistan around the globe.