CPEC is not against any country but for peace, prosperity: Sartaj Aziz 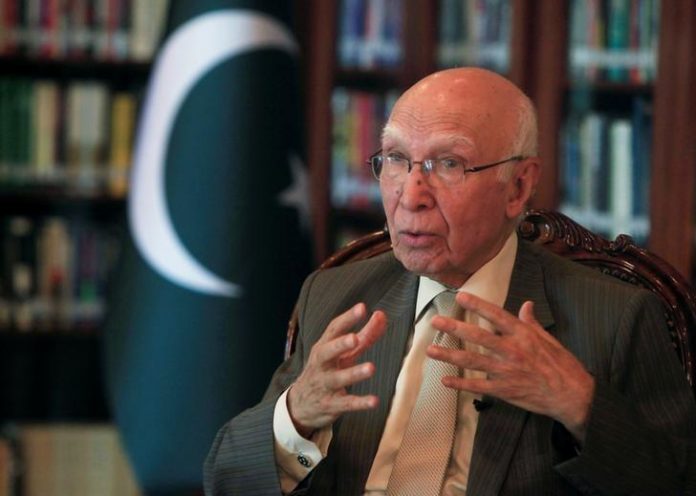 LAHORE: Planning Commission Deputy Chairman Sartaj Aziz said that CPEC is vital for the whole region and is not against any country but is for the peace and prosperity for all the nations around the globe.

He was addressing the session on China Pakistan Economic Corridor during the 2nd day of Pakistan Capital investment summit and Expo 2018 held in Islamabad. Sartaj Aziz said that CPEC is not just about roads and infrastructure but it is all about people to people connectivity for the brighter future of the world. CPEC will transform our country into an economic powerhouse and that is what every Pakistani wants.

While commenting on the economic growth, he told that Pakistan was stuck at merely 3 per cent growth rate from 2006 onwards but now the government is eyeing to achieve 6 per cent growth in the current year.

He said that Chinese President Xi’s idea of One Belt One Road (OBOR) is not just a concept of building roads but it connects policies, public and intellectuals in its larger essence. He said that Pakistan is proud that CPEC is the flagship project of OBOR and Pakistan is far ahead of other countries in terms of progress regarding OBOR.

He also mentioned that exports have also surged as China has become the highest export partner for Pakistan.

Sartaj Aziz further stated that in the next phase of CPEC implementation, railway infrastructure will be built at a greater level. He assured that Pakistan will become a powerful economy by 2030.

During the session, FWO Director General Lt Gen Muhammad Afzal said that Pakistan is not just a bridge between China and the sea but realistically Pakistan will connect the whole world. He stated that all the law enforcement agencies are well geared to face any challenge that might threaten the implementation of CPEC. He said that there is no security threat to CPEC while offering his support to investors who want to visit Balochistan for investment purposes. He mentioned that there are a number of investment opportunities in different sectors like mining and real estate etc.

In other sessions of the summit, outlook and investment potential of the energy sector, value creation through technology and FDI and challenges, potential and future of wealth management in the banking sector were also discussed. Key industry leaders and dignitaries from government institutions were among the panellists.