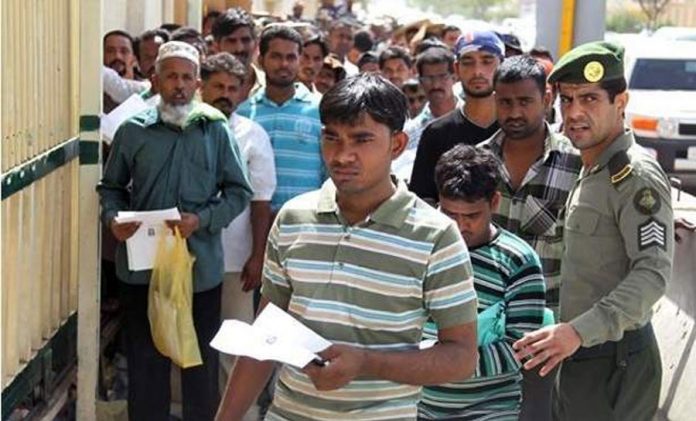 LAHORE: The recruitment of Pakistani labourers by Saudi Arabian employers dropped by 11 per cent to 460,000 in 2016, stated a report launched by the Asian Development Bank (ADB), titled ‘Labour Migration in Asia’, reported a private media outlet.

In 2017, Bangladesh replaced Pakistan as the largest supplier of labour to the kingdom owing to the removal of a six-year ban on recruitment of Bangladeshi workers in mid-2016.

Similarly, Association of Southeast Asian Nations (ASEAN) countries also experienced an almost 50 per cent decline in the influx of Pakistani workers in 2015-2106. Supply of labour to Malaysia declined 20,369 workers in 2015 to 10,625 workers in 2015 with only 33 people going to Singapore in 2016. The downward trend has been reinforced by the recent policy changes implemented in Malaysia and Saudi Arabia.

The Gulf Cooperation Council (GCC) countries also experienced a decline in the number of Asian workers, down 528,000 workers in 2016 compared to 2015. However, despite a 9 per cent decrease in 2016, Saudi Arabia is still the top destination for Asian workers with around one million Asian workers, employed in the Kingdom, with the drop largely attributable to the ‘saudisation’ policy introduced by the country in 2011, aimed at reducing reliance on foreign workers.

Over the last two decades, the number of international migrants, have increased significantly, with 30 per cent of the 247 million living in Asia as of 2015. However, remittances to Asia from the GCC countries still make up a small share of their total remittances.