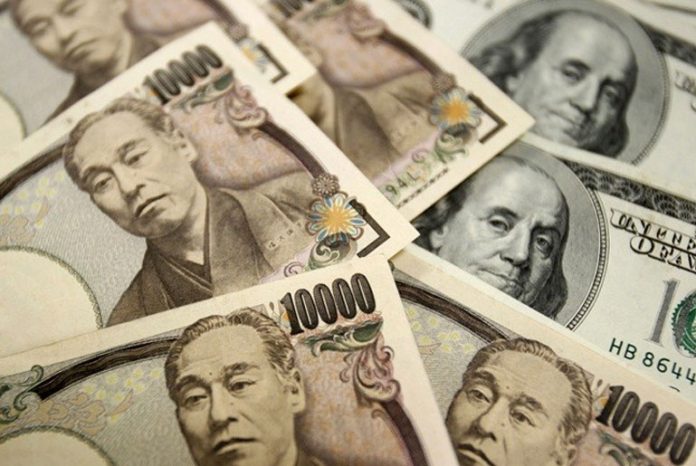 TOKYO: The dollar was in fine fettle against its peers on Friday, advancing to a nine-month high versus the yen, after data reinforced upbeat views about the U.S. economy and backed the Federal Reserve’s signal for a steady course of rate increases over the next year.

U.S. gross domestic product grew at a 4.2 percent clip in the second quarter, the fastest in nearly four years, according to government data on Thursday. Another report showed durable goods rose 4.5 percent in August, rebounding from a revised 1.2 percent drop the month before.

The decline in U.S. Treasury yields slowed in the wake of the upbeat data, underpinning the dollar. Yields had declined sharply after the Federal Reserve tightened monetary policy on Wednesday and stuck to its intention of hiking interest rates at a steady pace.

U.S. President Donald Trump and Japanese Prime Minister Shinzo Abe agreed on Wednesday to start trade talks in an arrangement that, for now, protects Japanese automakers from further tariffs, seen as a major threat to the export-dependent economy.

The dollar index against a basket of six major currencies extended its overnight rally and rose to 95.025, its highest since Sept. 12. The index has gained nearly 0.8 percent this week.

The single currency was hit by concerns around heavily-indebted Italy’s handling of its budget.

Italy on Thursday set its budget deficit target at 2.4 percent of gross domestic product for the next three years, defying Brussels and marking a victory for party chiefs over economy minister Giovanni Tria, who had pushed for a deficit below 2 percent.

The euro has lost nearly 0.9 percent this week, having pulled back from a 3-1/2-month high of $1.1815 scaled on Monday after European Central Bank chief Mario Draghi said he sees a vigorous pickup in euro zone inflation.

The single currency had been on an uptrend in the last few weeks, bolstered by generally solid European economic data.

Markets will now turn to eurozone preliminary inflation data due later in the day to see if they can support ECB President Draghi’s views on prices.

The pound was little changed at $1.3080 after falling 0.7 percent overnight.

The Swiss franc was near a one-month low of 0.9782 per dollar brushed overnight, when it tumbled more than 1 percent.