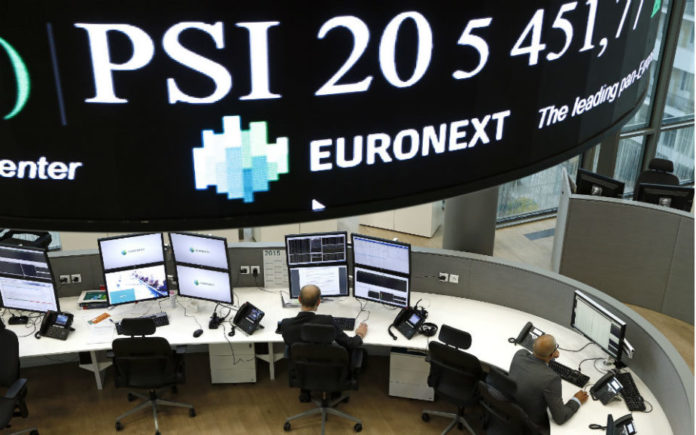 LONDON: World markets turned tail again on Monday, as a bounceback in oil prices and rising tensions between western powers and Saudi Arabia added to a cocktail of concerns that battered global stocks last week.

The main bourses of Japan and China tumbled overnight as trade concerns persisted, and Europe’s STOXX 600 index hit a 22-month low as US markets re-opened a fraction lower after their worst week since March.

The lack of confidence continued to boost traditional safe haven assets. The yen (JPY) and Swiss franc (CHF) both made ground on a subdued dollar in the currency markets while gold hit its highest since the end of July.

“I don’t think there is really any appetite to dive back in (to stocks), and the Saudi situation is just another ball for investors to have to juggle,” said CMC Markets’ senior analyst Michael Hewson. “If the trend we saw last week continues, it is going to be very hard for Europe to rally… The outlook remains very uncertain.”

The unexplained disappearance from the Saudi embassy in Istanbul of prominent Saudi journalist and dissident Jamal Khashoggi remained in the headlines as Saudi King Salman ordered an internal probe into the case.

US President Donald Trump said meanwhile that he had spoken with King Salman about Khashoggi and that he was sending Secretary of State Mike Pompeo to meet the king immediately.

Over the weekend Trump had promised “severe punishment” if it turned out the journalist, a US resident and Washington Post columnist, had been killed.

The official Saudi Press Agency (SPA) then quoted an unnamed official saying the kingdom “will respond with greater action,” if there are measures and that its economy “has an influential and vital role in the global economy.”

Traders read that as meaning driving oil prices up further. Brent crude responded by jumping 1 per cent which in turn saw Saudi stocks recover the full 3.5 per cent they had lost on Sunday when the diplomatic tensions flared.

Turkey’s lira was another big riser on Monday, jumping 1.5 per cent to its highest since mid-August after Trump cheered the release of a US pastor who had been under house arrest in Turkey.

Investors hope his release can lead to an improvement in strained US-Turkey relations.

“The lira is likely to benefit at least modestly during the period between now and the CBT (central bank) meeting of October 25 where we anticipate the next 300 bps rate hike,” ING analysts wrote in a note.

But the broader global picture was still cautious.

Wall Street’s S&P 500, Dow Jones and Nasdaq started in the red, albeit only just, after lacklustre US retail sales data. Saudi Arabia’s riyal currency was still testing the boundaries of its peg at 3.7514 to the dollar – its weakest spot rate since June 2017.

Overnight, MSCI’s broadest index of Asia-Pacific shares outside Japan had fallen 1 per cent as Shanghai ended down 1.5 per cent and just off a four-year low.

Japan’s Nikkei slumped 1.8 per cent on Monday, with carmaker shares hitting 13-month lows after Washington said it would seek a provision about currency manipulation in future trade deals with Japan.

MSCI’s broadest gauge of the world’s 47 top stock markets was off 0.2 per cent after a sizeable 3.87 per cent decline last week – its biggest since March – to a one-year nadir.

Over the weekend, China central bank governor Yi Gang said he still saw plenty of room for adjustment in interest rates and the reserve requirement ratio (RRR), as downside risks from trade tensions with the United States remain significant.

In London, sterling recovered from renewed Brexit deal worries, while commodities trading remained hung up on the Saudi tensions and the risk they could drive up prices.

Saudi Energy Minister Khalid al-Falih had said on a trip to India that his country is planning to push up production, but the prospect of a major diplomatic feud with the West trumped that sentiment.

Investors suspect the developments could ultimately undermine the leadership of Crown Prince Mohammed bin Salman if they escalate and destabilise the oil-rich kingdom.

“People had thought the Saudis would make up for the fall in Iran’s output. If they are starting to use oil as their weapon, that will be a whole new chapter,” said Kazuhiko Fuji, senior fellow at Research Institute of Economy, Trade and Industry, a think-tank affiliated with the Japanese government.