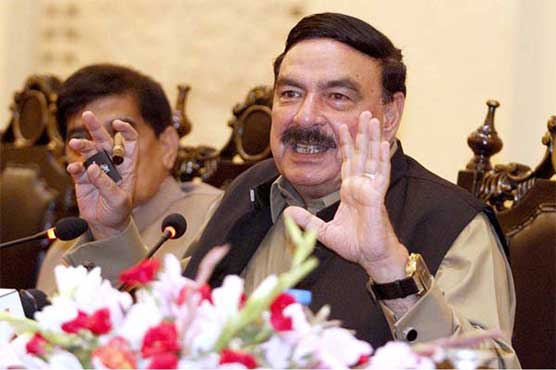 LAHORE: Pakistan Railways (PR) Minister Sheikh Rasheed Ahmed on Saturday asked the administration of Pakistan Stock Exchange (PSX) and others who were using the land owned by Pakistan Railways worth billions of rupees to immediately vacate the premises.

Addressing a press conference at PR Headquarters, he said that railways earned Rs1.1 billion more revenue in the freight sector during last two months, compared with the same period of the previous year, adding that the department would “earn a revenue of Rs10 billion” due to untiring efforts of its officers and employees.

The minister asked the administration of Karachi Stock Exchange (KSX) and others who were using the land owned by Pakistan Railways worth billions of rupees to immediately vacate the premises.

Sheikh Rasheed said that WiFi facility had been installed at all divisional stations, whereas cameras and PR police had also been deputed at warehouses in order to protect PR’s stock and assets.

He said his ministry wanted to launch a containers doorstep service within the next three weeks to bring further improvement in freight sector, while in this regard task force for freight trains had been directed to achieve set targets.

The minister said that tracking devices on a modern system would be installed at all locomotives of railways to estimate the fuel consumption, while its report would also be uploaded at the internet for people.

Sheikh Rasheed said that Prime Minister Imran Khan’s visit to China would be of great importance and has the potential to help his ministry, as China-Pakistan Economic Corridor (CPEC) was linked with the PR.

“The country’s economy cannot flourish without railways,” he asserted. “When rail will run, economy will move ahead.”

To a question, the minister said that the previous government spent Rs400-500 million at Narowal station, the hometown of Pakistan Muslim League-Nawaz leader Ahsan Iqbal, contrary to the fact that the station was not giving any mentionable earning to the PR.

To another query, he said that six trains had been launched during last two months, whereas six more would be launched soon.

PR Secretary and Chairman Javed Anwar and other senior officers were also present on the occasion.