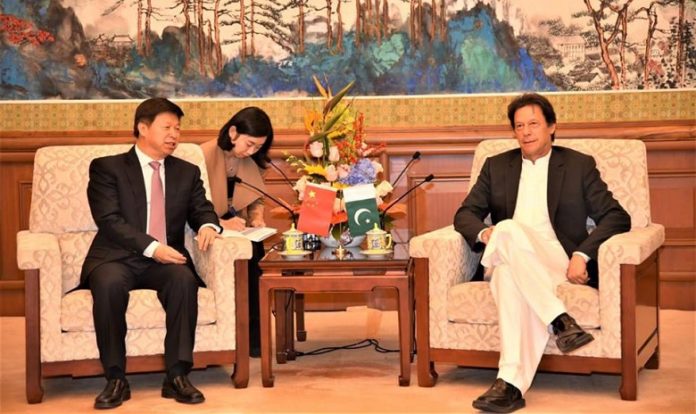 Talking to the AIIB president, PM Imran Khan said as a founding member of the AIIB, Pakistan fully supports the bank’s mission, adding that the AIIB had achieved good results in a short span of time since and was financing developmental projects in Pakistan.

“Pakistan looks forward to strengthening its cooperation with the AIIB,” he said, informing the AIIB president that his government has prioritized economic revival and structural reforms.

He said that the government is also making all-out efforts for poverty alleviation. Pm Khan underscored that several cooperation opportunities existed in Pakistan’s power generation and transmission, transport, water supply sectors. He welcomed AIIB to explore projects in these areas.

The prime minister on the occasion also reiterated his vision to further cement Pak-China economic and strategic cooperation.

Meanwhile, in a separate meeting, Prime Minister Imran Khan said Pakistan fully shared the mission of the Communist Party’s International Department of the Central Committee (IDCPC) with regard to the promotion of people-to-people contacts, including exchanges between political parties, academia, media, youth, women and think tanks.

In a meeting with Chinese IDCPC Minister Song Tao in Beijing, he said such exchanges would ensure that the exceptional friendship between Pakistan and China endured from generation to generation.

He recalled that Song’s visit to Pakistan in October had cemented bilateral relationship and fostered greater mutual understanding between the two countries.

The prime minister said Pakistan attached great importance to its relations with China, and was committed to enhancing cooperation across the board. He said the goodwill among the peoples of Pakistan and China provided a firm basis for the Pakistan-China all-weather strategic cooperative partnership for a shared future.

“As representatives of their respective nations, relations between the ruling parties of both countries are of paramount importance,” the PM affirmed.

Chinese Minister Song on the occasion said the prime minister’s first official visit to China since assuming office was keeping with the time-honoured traditions of the special friendship between Pakistan and China.