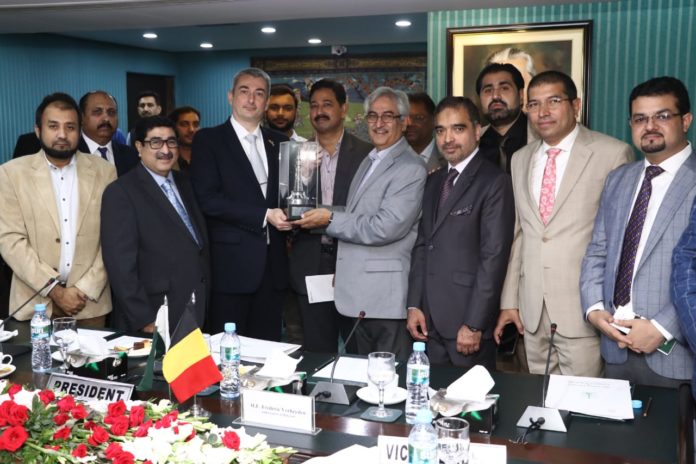 Speaking at the Lahore Chamber of Commerce and Industry as part of the Belgian trade delegation, the ambassador said that both countries should identify more areas for cooperation and should also introduce more tradable items to enhance mutual trade volume.

The envoy said that the Belgian companies have shown a keen interest in the Pakistani market, urging the Pakistani businessmen to start joint ventures with their Belgian counterparts.

“Pakistan should take full advantage of the best geographical location of Belgium in the European Union,” he said, stressing that there should be more interaction between the business communities of the two countries to enhance trade and economic cooperation.

He said that Pakistan is the beneficiary of GSP Plus Status and that implementation of all conventions under GSP Plus Status will help Pakistani businessmen to avail trade opportunities in Belgium.

Wallonia Export and Investment Agency CEO Pascale Delcomminette gave a detailed overview of the Belgian economy, saying that Belgium enjoys great importance as it is the geographical centre of the European Union. She highlighted that Belgium’s productivity is highest in the world, the export-to-GDP ratio is 85 per cent while foreign trade is playing a vital role in the country’s economic progress.

“Belgium is the 5th largest trade partner of Pakistan in the European Union and its companies have shown a keen interest in making mutual trade ties stronger,” she said, adding that Pakistani businessmen should develop strong liaison with their Belgian counterparts and establish distribution centres and warehouses there.

LCCI President Almas Hyder on the occasion noted that Belgium was the first country of the world that went through the industrial revolution, while Pakistan is the sixth largest population in the world and a big market for Belgian business community.

He said that there are numbers of investment opportunities in almost all the sectors of Pakistan’s economy and that the government is committed to improving the investment climate of the country.

Talking about bilateral trade, the LCCI president said Pakistan has a favourable balance of trade while its exports to Belgium are consistently on the rise. “In 2015, the total volume of our exports to Belgium was around $592 million which inched up to $651 million in 2016 and $701 million in 2017. Despite imports from Belgium dipping from $572 million to $366 million during the last two years, the total trade remained over $1 billion. I hope that in the wake of the second phase of GSP Plus status, Belgium will give us greater access to their markets that would allow us to take the level of bilateral trade to $2 billion,” Almas Hyder added.

Belgian Embassy Trade Commissioner Abid M Hussain said that the visit of Belgian trade delegation is an ample proof that interest of Belgian businessmen in Pakistan is growing. “The last memorandum of understanding (MoU) signed between Pakistan and Belgium expired three years ago and it was time bound. The new MoU will promote bilateral trade between the two countries and will not be time-bound,” he added.