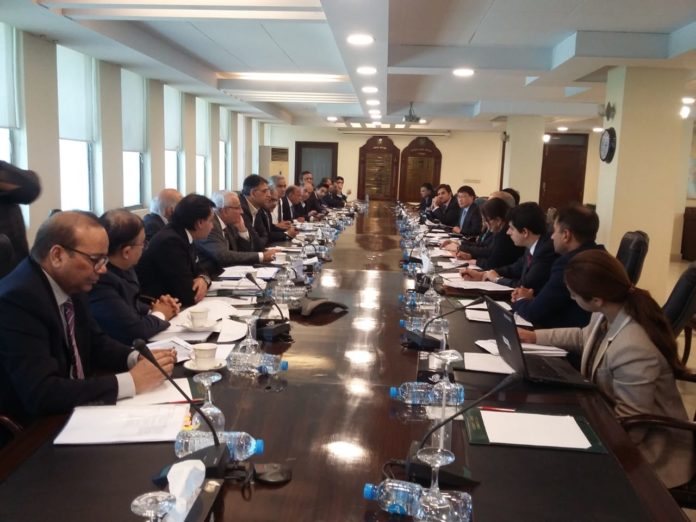 ISLAMABAD: No headway could be made in the first round of talks between Pakistan and the International Monetary Fund (IMF) regarding a financial bailout package for the cash-strapped country, as Islamabad refused to accept some stringent conditions of the Fund, including an increase in the tax rates, raising the electricity tariff, devaluing the currency and revealing the details of the financial assistance agreement with China.

Sources privy to the talks told Pakistan Today that the two sides will further deliberate on the points of disagreements during the second round of talks on January 15, 2019.

An end-of-mission press release issued by IMF announced that “positive engagement with Pakistan will continue over the coming weeks to finalise the programme with the Fund”.

It added, “Substantive progress has been made by the government of Pakistan and the IMF Mission towards developing a common understanding on the policy and structural reforms framework for the prospective IMF programme, including fiscal and monetary measures, corrective interventions for balance of payments sustainability, pro-poor spending, governance and development of a business-friendly environment.”

According to the statement, which was jointly prepared by IMF and the Ministry of Finance, an IMF mission, led by Mr Harald Finger, visited Pakistan from 7th to 20th November 2018. During this period, extensive talks were held between key ministries of the Government of Pakistan, including the Ministries of Finance, Planning, Development & Reform, and Energy, the State Bank of Pakistan, and the IMF Mission. These discussions covered all sectors of the economy. Members of Parliament and provincial finance ministries also exchanged views with the Mission.

Federal Minister for Finance Asad Umar chaired the concluding session with the Mission on Tuesday.

“The positive engagement with the IMF will continue over the coming weeks to finalise the programme with the Fund,” the Fund announced, adding that the Pakistani government “acknowledges and appreciates the support that the Fund is providing in achieving the government’s broad-based development agenda aimed at enhancing the social and economic well-being of the people of Pakistan.”

According to the insiders, Pakistan and IMF, as per the understanding made so far, will go for an extended programme of the Fund on the basis of the agreed points.

However, sources at the Ministry of Finance claimed that the conditions being set by the IMF for the next loan programme were difficult for the incumbent government to accept, keeping in view the expected reaction from the public on inflation to be caused by tariff hike and devaluation of the Rupee against US dollar.

“The finance minister had already indicated that the government would not sign an agreement with IMF if it offered tough and unbearable conditions for the loan,” said the sources.

According to sources, the Fund has demanded an increase in electricity prices by 20-22 per cent. The Pakistani delegation also disagreed on increasing tax collection target from Rs4,300 billion to over Rs4,700bn.

The other conditions, which were also not acceptable to the government, included the disclosure of financial details of the China-Pakistan Economic Corridor (CPEC) as well as Chinese assistance.

“IMF had wished to know the expected financial assistance from China to counter Pakistan’s balance-of-payments issue,” the sources said.

Initially, Pakistan had demanded a bailout package of over $6bn from the Fund as the country received short-term loans worth about $6bn from Saudi Arabia. Pakistan’s ally China has also promised to help, though it is unclear how much Beijing will contribute.

In November, Prime Minister Imran Khan undertook trips to the UAE and Malaysia to ask for financial support and an increase in the economic ties.

Pakistan — which has gone to the IMF repeatedly since the late 1980s — is facing a widening balance of payments crisis. Riyadh pledged $6 billion in funding and struck a 12-month deal for a balance of payments lifeline during a visit by Prime Minister Imran Khan.

Despite the pledges, Pakistan has said it will still seek broader IMF support for the government’s long-term economic planning. Khan’s new government has been searching for ways to rally a struggling economy hit by inflation, and shore up Pakistan’s dwindling foreign currency reserves.

The former cricketer has launched a highly-publicised austerity drive, including auctioning off government-owned luxury automobiles and buffaloes, in addition to seeking loans from “friendly countries” and making overtures to the IMF.

However, Islamabad has received billions of dollars in Chinese loans to finance ambitious infrastructure projects, and the US — one of the IMF’s biggest donors — has raised fears that Pakistan could use any bailout money to repay its debts to Beijing. Islamabad, which last received an IMF bailout in 2013 to the tune of $6.6 billion, has refuted these claims.

Earlier this month Finance Minister Umar said that unspecified assurances from China — combined with a pledge made by Saudi Arabia in October — meant that Pakistan’s immediate fiscal woes were “over”.

In his statement, Umar said the reforms discussed included “fiscal and monetary measures, corrective interventions for balance of payments sustainability, pro-poor spending, governance and development of a business-friendly environment”.