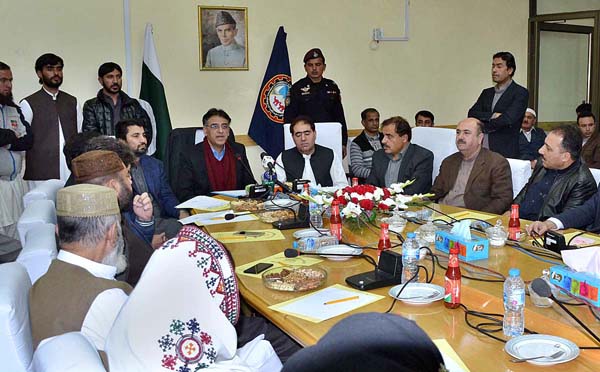 QUETTA: Finance Minister Asad Umar said on Monday that there should be an end to the double standards in international trade, adding that Pakistan would try to build strong trade relations with all the countries of the region, including Iran.

In his address to the Quetta Chamber of Commerce and Industry members on Monday regarding difficulties in trade, the finance minister said that economic and trade policies were being formulated to ensure development of agriculture and industrial sectors in the country with an aim to provide maximum job opportunities to the youth.

Asad Umar said Balochistan was the largest province of the country where central and provincial governments would work together to uplift the agriculture sector.

He said there were vast opportunities of investment in agriculture, minerals and halal food sectors of the province to meet the international demand.

The federal minister said the next phase under the China-Pak Economic Corridor (CPEC) would include the establishment of industries, while the government would try to ensure the inclusion of chambers of commerce during the execution process.

He said that Benazir Income Support Programme (BISP) and other related programmes would be introduced for eradication of poverty from Balochistan, adding that opportunities would be provided to youth so that their skills could be utilised.

“The government had also extended its hand towards India for maintaining trade relations, but it did not respond in a positive manner,” he lamented.

Umar said the government wanted to establish such a system where all the complications being faced by the business community could be tackled and they could be facilitated in line with developed countries.

He said the government was introducing a comprehensive plan to end smuggling which would improve the security situation in the respective areas of the state. “Smuggling would end after installation of the fence at Pak-Afghan border,” he added.

Umar stated said directives were issued for the completion of a report within 30 days to promote trade activities between Pakistan and Iran. He also assured the traders that he would take all possible measures to resolve their problems.

Earlier this month, in an interview with a foreign media outlet, the minister had claimed the Balochistan government was eager to enhance investment in the province under the CPEC project.

Umar said people of Balochistan were patriotic Pakistanis but there were some sponsored activities by terrorists who were trained and funded from outside Pakistan.

“There are concerted efforts led by India to damage the CPEC. People of Balochistan have elected a government that fully stands by CPEC and have also shown loyalty with Pakistan,” the finance minister had said.