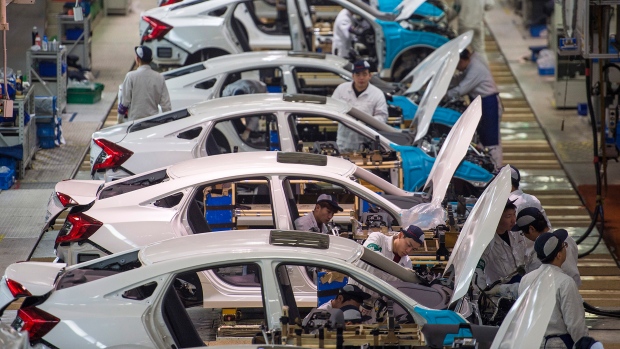 BEIJING/SHANGHAI: Carmakers in China will face more fierce competition this year, after a tough 2018 when the world’s biggest auto market contracted for the first time in more than two decades, the country’s top auto industry association said on Monday.

Companies such as homegrown Geely and Britain’s biggest automaker Jaguar Land Rover have already in recent days flagged caution about China sales in 2019, hit also by Beijing’s trade war with the United States.

This was against a 3-per cent annual growth forecast set at the start of 2018 and is the first time China’s auto market has contracted since the 1990s.

China’s car market “still faces relatively large pressures in the short-term”, senior CAAM official Shi Jianhua said at a briefing, attributing the weak 2018 sales to the phasing out of purchase tax cuts on smaller cars and the Sino-U.S. trade war.

CAAM expects the weakness to persist and has forecast flat sales of 28.1 million vehicles for 2019, while other government and industry bodies see a 0-2 percent growth.

Ford was the worst performer among global car makers in China last year, with its sales shrinking 37 percent.

Geely, China’s most successful carmaker, sold 20 percent more cars in 2018, but this was sharply lower than a 63 percent growth in 2017. It is forecasting flat sales this year.

Japan’s Toyota Motor, however, bucked the trend, with a 14.3 percent rise in sales in China, versus 6 percent growth in 2017, helped by better demand for its luxury brand Lexus and improved marketing efforts.

The bleak numbers add to worries for investors, already spooked by signs of a broader drop in demand from the world’s No.2 economy, especially after Apple’s rare revenue warning citing weak iPhone sales in the country.

Analysts are, however, counting on measures promised by China to buoy spending as well as rising demand for new energy vehicles (NEVs) to bring some relief.

China’s state planner has said it will introduce policies to lift domestic spending on items such as autos, without providing specifics. Beijing has also made changes to the income tax threshold to hike incomes and personal spending power.

However, some analysts struck a sombre note amid forecasts China’s economy would slow further this year. Data this month is expected to show the economy grew around 6.6 percent in 2018 – the weakest since 1990. Policy sources have said Beijing is planning to set a target of 6-6.5 percent for 2019.