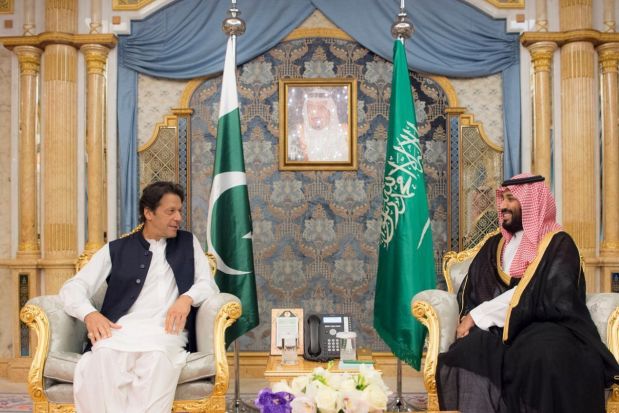 Saudi Arabia and its ally, the United Arab Emirates, have offered Pakistan over $30 billion in loans and investments, with Saudi Crown Prince Mohammed bin Salman expected to visit in February to sign off on the kingdom’s deals, according to Pakistani and Saudi officials.

The new government sees the Saudi investment plan as a sign that Prime Minister Imran Khan’s pledge to “open Pakistan for business” is working, according to a Wall Street Journal report.

The plan includes a $10 billion Saudi investment to build an oil refinery and petrochemicals complex—a move that appears to come at the expense of Saudi rival Iran, a neighbor of Pakistan that had hoped to become a major energy supplier.

Also in the mix is Qatar, which is looking to build on its liquefied natural gas sales to Pakistan and also make investments. Saudi Arabia and the UAE have sought to isolate Qatar—but Khan accepted an invitation to visit the Gulf nation, meeting the ruler in Doha on Tuesday, a trip that could rile Riyadh and potentially fuel the bidding for Pakistani’s favors. Islamabad says it wants that LNG supply on better terms.

Pakistan had long relied on its alliance with the US to help keep its economy afloat; when that relationship soured in recent years, Khan’s predecessor turned to China, signing on to a massive infrastructure plan that critics say was too expensive, with projects picked for political reasons.

Khan’s government says it wants China to set up factories in Pakistan rather than build more infrastructure.

Now, Khan is turning to Gulf nations as key benefactors. He was one of the few high-profile international leaders to attend an investment summit called by the Saudi crown prince in October, when others shunned the event over the killing of Saudi journalist Jamal Khashoggi.

Pakistan has close ties to Saudi Arabia and the UAE, but hasn’t previously received financial support on the scale now being promised. A $20 billion investment package from Saudi Arabia would roughly match what China has already spent in Pakistan in its current infrastructure drive, though China’s program amounts to up to $62 billion altogether. Separately, the UAE is also working on a multibillion refinery investment plan, according to UAE and Pakistani officials.

In addition, Saudi Arabia and the UAE are set to provide immediate loans to Pakistan of up to $12 billion, Pakistani officials say. Islamabad says there are no hidden geopolitical costs to the Saudi splurge. Pakistan has helped bring these two Gulf nations, which are also close US partners, into the peace process underway for Afghanistan. In recent years, Pakistan increased its soldiers stationed in Saudi Arabia, for training local forces and bolstering defenses.

The new loan pledges give Pakistan some breathing room as it battles a balance of payments crisis. Khan’s government inherited fast-depleting foreign exchange reserves and ballooning trade deficit, with experts predicting it needed a rapid IMF loan, which would require economic and financial reforms.

Talks with the IMF, running since October, are working toward a program with conditions that the government could accept, Finance Minister Asad Umar said.

“We would like to be in an IMF program once we reach a program which we think is in the interests of the Pakistan economy,” Umar said.

An IMF team had been expected to return to Pakistan for final negotiations so that a program could be passed by the Fund’s board in mid-January. With the Gulf funds, the IMF loan required is now expected to be much smaller.

Economists say that an IMF program would typically require an enforced slowdown in growth to restrain imports, increased taxes, higher prices for electricity and gas, and further depreciation in the currency.

Pakistan’s foreign exchange reserves stand at just $6.9 billion, according to the central bank, which covers only two months of imports. That is after $2 billion so far received from Saudi Arabia.

Khan has said that he wants to be a bridge for divisions in the Muslim world. The first visitor to his government when it took office last year was Iran’s foreign minister. The prime minister has since twice visited both Saudi Arabia and the UAE, while Emirati crown prince, Sheikh Mohammed bin Zayed, visited Pakistan this month.

In addition, China is expected to provide $2 billion to $3 billion in loans, analysts said. China’s infrastructure program in Pakistan centers on developing the new Pakistani port of Gwadar, at the mouth the Strait of Hormuz, a key oil shipping channel for the Middle East.

The Saudi complex would be built at Gwadar, just 70 miles from the Iranian border—potentially stoking tensions with Tehran, which accuses Riyadh of sponsoring jihadist groups inside Iran, a charge Saudi Arabia denies. Putting a refinery at Gwadar would be a significant boost for the port, which is effectively in competition with a new Iranian port being built nearby, in Chabahar.

Visiting Gwadar this month, the Saudi oil minister, Khalid al-Falih, told local news outlets the port would provide access not only to Pakistan but also Central Asia. That would mesh with pipeline proposal discussed in the past by Pakistani and Chinese officials that would take oil from Gwadar through Pakistan to western China and central Asia.

Al-Falih said that Saudi Arabia is also in “quite advanced” talks with Pakistan over mining, fertilizer production, power generation and renewable energy projects. That includes a wish to buy two newly built power plants in Pakistan, likely to fetch up to $5 billion, Pakistani officials said.

“This is also about connecting to strategic allies, and helping each other implement. And not looking at things as a zero-sum game, but trying to help the other side in order to advance your own strategy,” Al-Falih told a local television outlet.