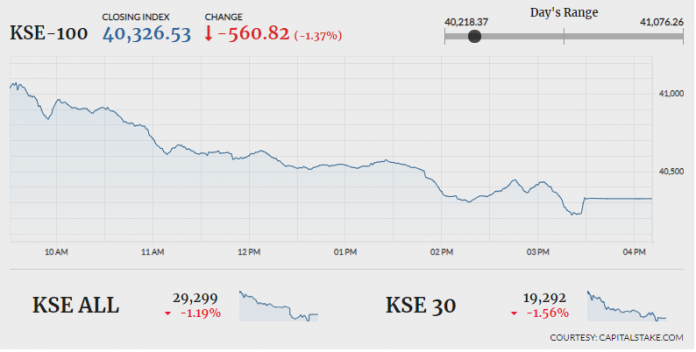 KARACHI: Failing to sustain gains that were accumulated in the morning, the Pakistan Stock Exchange (PSX) ended the day in red. Indices which opened positive soon took a U-turn and continued to bleed all day long. Foreign investors closed the last four trading sessions as net buyers with a net inflow of $12.17 million.

As per news reports, Finance Minister Asad Umar, while addressing the Sarhad Chamber of Commerce and Industries in Peshawar, said that the government has come closer to reaching an agreement with the International Monetary Fund (IMF). Moreover, he stated that Pakistan is also focusing on boosting trade with Iran and Afghanistan besides working on a Strategic Economic Draft to strengthen economic ties with Turkey. He added that the state is trying to simplify current tax procedure in order to widen the tax net and that the government is in talks to bring PayPal to Pakistan.

On the economic front, Moody’s Rating Agency has changed its position for the banking system from stable to negative. As per the published report, the operating conditions of the banks will be difficult as real GDP growth rate is expected to slow down to 4.3pc.