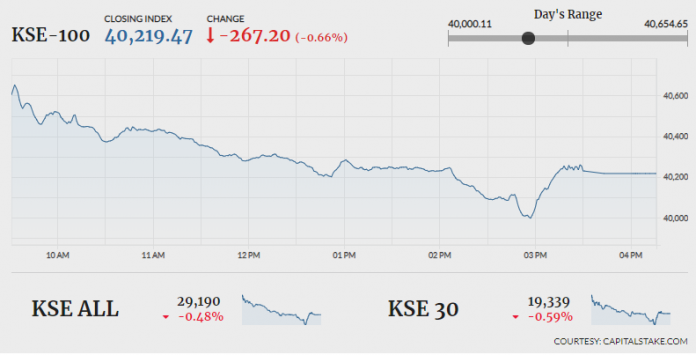 KARACHI: Investors preferred to stay away from the stock market on the first day of the trading week, resulting in low turnover. The indices that opened positive soon took a dip and closed the day negative.

Foreign investors, on the other hand, ended the outgoing week as net buyers with a net inflow of $12.09 million.

On the economic front, Pakistan and Saudi Arabia have signed $20 billion worth memorandums of understanding (MoUs) in different fields during a ceremony held after the arrival of Crown Prince Mohammed Bin Salman arrived in Islamabad.

Meanwhile, as per media reports, a four-member delegation would be witnessing a review of its performance by an expert group of Financial Action Task Force (FATF) on its compliance with global guidelines against terror financing and money laundering on Monday in Paris. Previously, Pakistan had been placed in the grey-list by FATF.

The market volumes remained thin and were recorded at 98.84 million. K-Electric Limited (KEL -1.53pc) was in the lead with a volume of 6.34 million, followed by Pak Elektron Limited (PAEL -2.36pc) and Fauji Foods Limited (FFL +0.09pc) with 5.44 million shares and 5.42 million shares exchanging hands respectively.

The cement sector lost -2.13pc soon after India imposed 200pc (previously 7.5pc) customs duty on all items imported from Pakistan. According to analysts, the hike in customs duty is expected to hurt cement players from the north.

Berger Paints Pakistan Limited (BERG +4.79pc) announced its financial performance for the second quarter of the financial year 2019 (FY19). Sales were down by 6pc YoY while earnings per share improved from Rs2.15 in the same period last year to Rs2.37.

Ghandhara Nissan Limited (GHNL -4.91pc) also released its financial results for the second quarter of FY19. An increase of 21pc YoY was witnessed in revenue, whereas earning per share declined from Rs2.05 in the same period last year to Rs0.70.