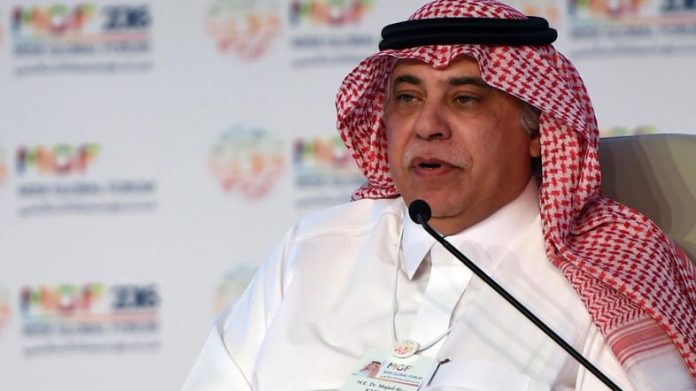 ISLAMABAD: Saudi Arabian Minister for Commerce and Investment Majid Al-Qassabi on Monday said that Saudi Arabia and Pakistan could jointly deal with the challenges faced by both the countries.

“Pak-Saudi relations are moving in a new and positive direction and strategic relations between both the brotherly countries are of paramount importance to the region,” Majid Al-Qassabi said while addressing the Pak-Saudi Business Conference in Islamabad along with Adviser to Prime Minister Imran Khan on Commerce Abdul Razak Dawood.

Majid Al-Qassabi said that “bilateral ties between the two countries are moving in a new direction”.

“The crown prince has also expressed his desire to turn the brotherly relationship between the two countries into a strategic partnership. MBS has assured that Pakistan and Saudi Arabia are partners in development,” he asserted.

Al-Qassabi further added that “we need to increase the bilateral trade volume between Pakistan and Kingdom, which currently stands at $3.7bn”.

Stressing the need for an incentive-based market, he held that “the two states need to discuss and discover the possible business opportunities”.

Adviser to Prime Minister on Commerce Abdul Razak Dawood said that the visit of Saudi Crown Prince Muhammad bin Salman to Pakistan has “heralded a new era in bilateral ties between Pakistan and Saudi Arabia”.

The former DESCON director acknowledged that “Saudi investment is crucial for positive growth of the ailing economy.”

Observing that Pakistan and Kingdom have shared a bond of mutual trust and cooperation over the years, the business magnate said that “Saudi investment in mining and mineral sectors is highly appreciated”.

In the past few years, Pakistan – in collaboration with China – has taken many steps to improve the energy crisis situation in the country. While answering a question regarding mega Saudi investments, the advisor said that “Saudi investments will help Pakistan tackle the economic crisis”.

Dawood assured that “Saudi investors will be provided with every possible facility in their business ventures”.

Saudi Arabia Crown Prince Mohammed bin Salman on Sunday landed on the red carpet in Pakistan amid much fanfare and strict security for his two-day visit to the country. Prime Minister Imran Khan, Chief of Army Staff General Qamar Javed Bajwa and cabinet members welcomed the prince and his delegation as the Saudi plane touched down at Nur Khan Airbase, Rawalpindi.

During their visit, the Saudi delegate will ink mega-investment agreements worth $20 billion in Pakistan.