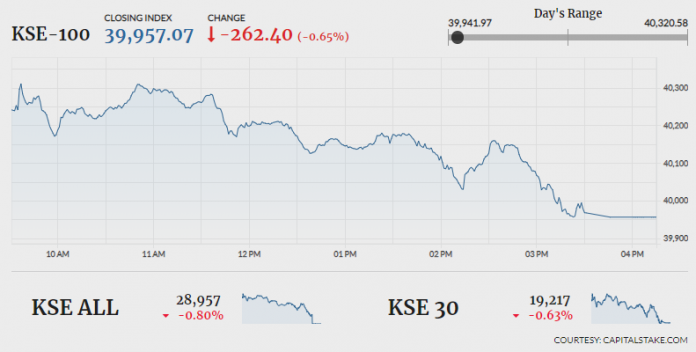 KARACHI: Negative sentiments prevailed at the Pakistan Stock Exchange (PSX) once again on Tuesday, as the indices which opened in green failed to sustain gains amidst depleting volumes.

Political noise neutralised any positive that could have come from the $20 billion investments to be made by Saudi Arabia. Foreign investors continued with their buying trend and recorded a net inflow of $1.91 million on Monday.

According to data released by the State Bank of Pakistan, foreign direct investment dropped by 18pc to $1.45 billion during July 2018 – January 2019 as compared to $1.76 billion in the same period last year.

Kohinoor Energy Limited (KOHE +4.85pc) released its financial performance for the second quarter of the financial year 2018-19 (2QFY19). An interim dividend of Rs1.50 was approved by the board. The company’s revenue declined by 3.6pc YoY, while its earnings per share improved from Rs0.82 in the same period last year to Rs1.04. The company’s cost of sales declined by 12.3pc YoY, hence improving the gross profit margins (40pc YoY).

Nimir Industrial Chemicals Limited (NICL +3.87pc) declared its financial results for the second quarter of FY19 along with an interim dividend of Rs1.50. Sales appreciated by 22pc YoY, while earnings per share climbed up by 26pc YoY.

Otsuka Pakistan Limited (OTSU -3.05pc) announced its financial results for the second quarter of FY19. Sales increased by 19pc YoY, while earnings per share further deteriorated from Rs-0.25 in the same period last year to Rs-6.72 in the current year.