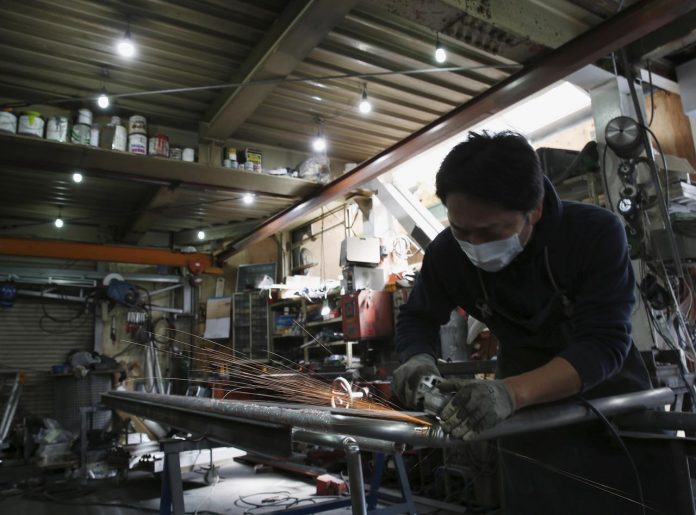 LONDON/HONG KONG: Factory activity contracted across Asia and Europe last month as an escalating trade war between Washington and Beijing raised fears of a global economic downturn and heaped pressure on policymakers to roll out more stimulus.

Such growth indicators are likely to deteriorate further in coming months as higher trade tariffs take their toll on global commerce and further dent business and consumer sentiment, leading to job losses and delays in investment decisions.

Some economists predict a world recession and a renewed race to the bottom on interest rates if trade tensions fail to ease at a Group of 20 summit in Osaka, Japan at the end of June, when presidents Donald Trump and Xi Jinping could meet.

The US-China trade war, slumping automotive demand, Brexit and wider geopolitical uncertainty took their toll on manufacturing activity in the euro zone last month. It contracted for a fourth month in May – and at a faster pace.

“The additional shock from the escalated trade tensions is not going to be good for global trade. In terms of the monetary policy response, almost everywhere the race is going to be to the downside,” said Aidan Yao, senior emerging markets economist at AXA Investment Managers.

IHS Markit’s May final manufacturing Purchasing Managers’ Index for the eurozone was 47.7, below April’s level and only just above a six-year low in March.

In Britain, the Brexit stockpiling boom of early 2019 gave way last month to the steepest downturn in British manufacturing in almost three years as new orders dried up, boding ill for economic growth in the second quarter.

The outlook, however, remained grim as output growth slipped, factory prices stalled and businesses were the least optimistic on production since the survey series began in April 2012.

Central banks in Australia and India are expected to cut rates this week, with others around the world are seen following suit in coming weeks and months.

While US manufacturing is expected to grow steadily, economists expect the global malaise to eventually feed back into the US economy. Fed funds rate futures are now almost fully pricing in a rate cut by September, with about 50pc chance of a move by end-July.

JP Morgan now expects the Federal Reserve to cut rates twice this year, a major change from its previous forecast that rates would stay on hold until the end of 2020.

Meanwhile, Monday’s survey adds to evidence that the eurozone economy is under pressure and will likely be of concern to policymakers at the European Central Bank, who have already raised the prospect of further support.

There is little likelihood of them hiking interest rates before 2021, according to economists in a Reuters poll last week. They said the bank’s next policy move would be to tweak its forward guidance toward more accommodation.

The trade conflict between China and the United States escalated last month when Trump raised tariffs on some Chinese imports to 25pc from 10pc and threatened levies on all Chinese goods.

If that were to happen, and China were to retaliate, “we could end up in a (global) recession in three quarters”, said Chetan Ahya, global head of economics at Morgan Stanley.

Tensions flared again between the United States and China at the weekend over trade, technology and security.

China’s Defence Minister Wei Fenghe warned the United States not to meddle in security disputes over Taiwan and the South China Sea, while acting US Defence Secretary Patrick Shanahan said Washington would no longer “tiptoe” around Chinese behaviour in Asia.

“We take this seriously. It means that the trade war has not only become a technology war but also a broad-based business war. There will be more retaliation actions from China, especially for the technology sector,” said Iris Pang, Greater China economist at ING.