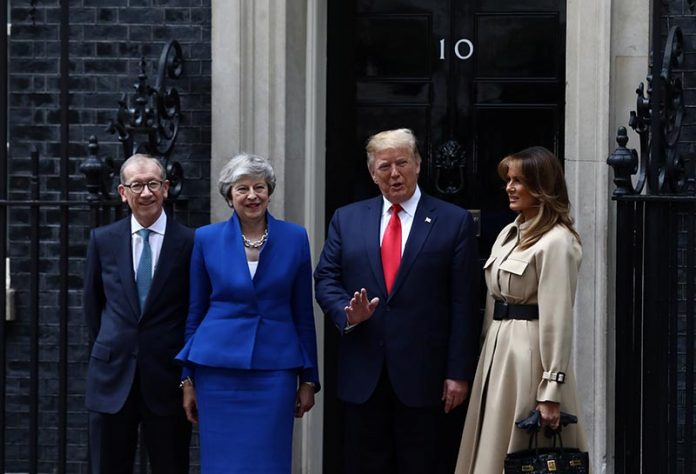 LONDON: Donald Trump promised Britain a substantial post-Brexit trade deal with the United States on Tuesday, quipping to outgoing Prime Minister Theresa May that she should stick around to clinch it though she is due to step down in two days’ time.

Feted by Queen Elizabeth on the first day of his state visit to Britain, Trump turned to politics on Tuesday, potentially meeting candidates vying to succeed May and a discussion about the role China’s Huawei should have in building 5G networks.

Even before Air Force One landed on British soil, Trump praised the main leaders of Brexit – Boris Johnson and Nigel Farage – and his advisers called on Britain’s next leader to block Huawei from the next generation mobile phone technology.

“We’ll have a very, very substantial trade deal, it’ll be a very fair deal, and I think it’s something we both want to do,” Trump told May at a meeting in St James’s Palace, a 500-year-old official residence of the monarch.

“I don’t know exactly what your timing is, but stick around. Let’s do this deal,” Trump said. May is due to resign as Conservative Party leader on Friday, but will remain as prime minister while a contest is held to replace her.

May said Britain and the United States should work together to keep markets free, fair and open.

The state visit, promised by May back in January 2017 when she became the first foreign leader to meet him after he took office, is cast as a chance to celebrate Britain’s “special relationship” with the United States, boost trade links and reaffirm security cooperation.

But the collapse of May’s premiership over Brexit and Trump’s penchant for ignoring the conventions of modern diplomacy have made the trip one of the most unconventional state visits in recent British history.

Ahead of the visit, Trump praised Johnson, the former foreign secretary and leading Brexit campaigner, and advised a sharp exit from the European Union on Oct. 31 with or without a deal.

Trump also called for arch-Brexiteer Farage, a scourge of May’s ruling Conservative Party, to conduct talks with the EU.

Brexit is the most significant geopolitical move for the United Kingdom since World War Two and if it happens, London will be more reliant on the United States as ties loosen with the other 27 members of the EU.

Huawei will top talks in London after the British government appeared to defy Trump administration demands and allow the Chinese company a limited role in building 5G networks.

“We’ve been clear: Our ask is that our allies and our partners and our friends don’t do anything that would endanger our shared security interests or restrict our ability to share sensitive information,” US Secretary of State Mike Pompeo said.

The Trump administration has told allies not to use Huawei’s 5G technology and equipment because it fears that would allow China to spy on sensitive communications and data. Huawei denies it is, or could be, a vehicle for Chinese intelligence.

Notwithstanding Britain’s enduring alliance with the United States, some British voters see Trump as crude, volatile and opposed to their values on issues ranging from global warming to his treatment of women.

A giant inflatable blimp depicting Trump as a pouting baby in a diaper was raised outside the British parliament in London on Tuesday ahead of what is expected to be one of the city’s largest protests against a foreign leader.

“We’re trying to remind the president how unwelcome he is in this country,” said Leo Murray, the co-creator of the blimp. “Donald Trump is childish, trivial, insulting. He embodies all of these things. This is an incredibly apt way to welcome him.”

In central London, thousands of protesters were expected to take part in a “Carnival of Resistance” later in the day to voice their opposition to the president. Environmental activists, anti-racism campaigners and women’s rights protesters were among those due to take part.

During their meeting, Queen Elizabeth gave Trump a book by Winston Churchill on World War Two while his wife Melania received a specially commissioned silver box.