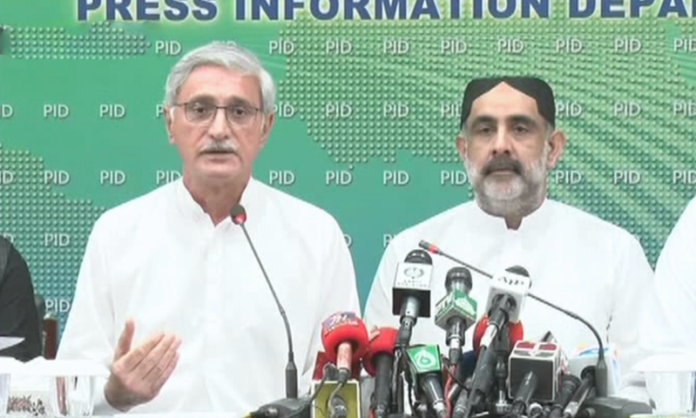 Speaking on the occasion, Tareen lamented that despite being an agricultural country, having best kinds of water, land, environment and other prerequisites, Pakistan had turned into a food importing country. “In last year alone, agriculture products worth $4 billion were imported,” he informed.

He blamed the previous governments (PML-N, PPP) for not promoting the agriculture sector of the country.

Giving details about the programme, he said out of the total Rs309 billion package, the federal government would provide Rs84 billion while the remaining amount of Rs225 would be shared by the provincial governments.

“Unfortunately, the Sindh government has so far not participated in the programme,” Tareen said, adding that the federal government had requested Sindh to set aside all the political differences for the larger interests of farmers and for the development of the country’s agriculture sector.

“Despite that, the federal government has allocated an amount of Rs15-18 billion in its PSDP 2019-20 for Sindh in order to promote its agriculture and livestock sectors as well as other areas.”

Tareen said that PC-1 of the programme has been finalised and it would be presented in the meeting of the Executive Committee of the National Economic Council (ECNEC) for approval.

He said the overall allocations for the agriculture sector have been enhanced, as the federal government has increased them from Rs1 billion in its Annual Development Plan last year to Rs12 billion.

“Agricultural spending would be taken up to the record level of Rs70 billion in the next four years,” he claimed.

The PTI stalwart said that the programme was a revolutionary step of the government and besides promoting the agriculture sector, it would also benefit the local farmers as special efforts would be made to enhance the per acre yield of all major crops.

“Special measures would be introduced to enhance per acre yield of wheat by 35-40 maunds,  rice by 10-20 maunds, sugarcane by 650-800 maunds,” he said, adding that incentives have been announced for the cultivation of oilseeds like canola and sunflower.

In order to make the agriculture produces more competitive, he said that the government would introduce special measures for energy, water conservation and pest management to reduce the cost of production.

He said that Rs220 billion would be spent on the construction of small dams and watercourse development, adding that as many as 70,000 watercourses would be developed.

“About 50pc watercourses would be developed, which would help save about nine million acre-feet water annually and this programme would be completed within the next four years.”

NFS&R Minister Sahibzada Mehboob Sultan on the occasion lauded the efforts of Jahangir Tareen in the agricultural development of the country.

“Jahangir Khan Tareen has made a lot of efforts in the formulation of the Agriculture Emergency Programme, which focuses on increased productivity of major crops, including wheat, rice, cotton, sugarcane and oil seed,” the minister stated. “Tareen has taken all the provinces on board and has held several meetings with them to form working groups in order to finalise the programme.”