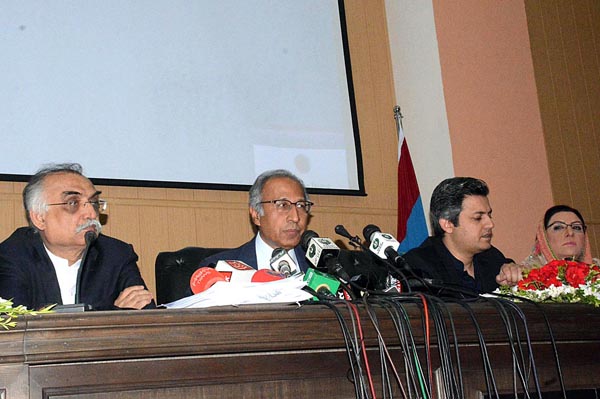 –‘A record 137,000 people declared their assets and deposited taxes worth Rs70bn under Asset Declaration Scheme‘

ISLAMABAD: Adviser to Prime Minister on Finance Abdul Hafeez Shaikh said on Thursday that the International Monetary Fund (IMF) agreement was a message to the world that the Pakistani government would exhibit responsibility in controlling its expenditures and will mobilise taxes from its elite by expanding the tax net.

The statement came a day after the Executive Board of the IMF approved a $6 billion bailout package for Pakistan and immediately released $1 billion to ease the pressure on the country’s foreign exchange reserves.

While addressing a presser, Hafeez Sheikh said, “We will take difficult decisions, which, in the long run, will ultimately protect the masses.”

The finance adviser was flanked by Minister for Revenue Hammad Azhar and Chairman Federal Board of Revenue (FBR) Shabbar Zaidi.

Terming the IMF bailout package as “important”, Hafeez Shaikh said international forces and institutions would be satisfied to note that “Pakistan has been given a show of support by an institution whose basic objective is to assist its member states at a time when they need help.”

Hafeez Shaikh revealed that the Asian Development Bank (ADB) was willing to extend an additional $3.4 billion loan, out of which $2.1 billion was likely to be received during the current year. He hoped to receive more funds from the bank.

“The World Bank is also ready to provide loans to Pakistan,” he stated, clarifying that these loans from ADB and WB would not be linked to any projects but for the purpose of budgetary support and general expenditures.

He said the Pakistan Tehreek-e-Insaf government had inherited a hefty debt of nearly Rs31,000 billion, adding that the government’s economic team had taken several decisions with regard to returning these loans, one of which was approaching the IMF.

On the government’s recently-concluded amnesty scheme, the PM’s aide said a record 137,000 people declared their assets and deposited taxes worth Rs70 billion under the Asset Declaration Scheme.

“This is the highest number of beneficiaries in a single scheme in Pakistan’s history, which makes it unique to other schemes in which people declared assets worth over Rs3,000 billion,” he added.

Earlier this week, FBR Chairman Shabbar Zaidi had said that tax-filing was the responsibility of every citizen to ensure the growth and development of the country, adding that through new initiatives, the government had eliminated the concept of non-filer in tax system and henceforth it would be hard for any citizen to remain out to tax-loop now.

He had said that the purpose of the Assets declaration Scheme was not revenue generation; “it rather focuses more on the documentation of the economy”.